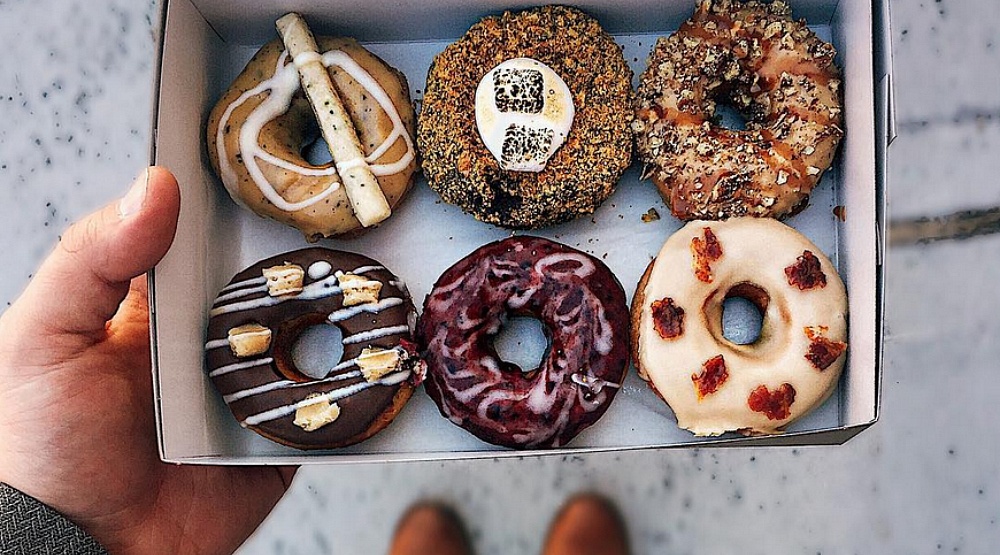 Celebrate summer with a donut in hand!

Montreal is a foodie’s paradise, thus it’s no surprise that the city’s artisanal donut game is seriously on point.

From Leches Desserts in Saint-Henri to Little Italy’s Trou de Beigne, there are plenty of spots to find a delicious donut in our fair city.

Check out 7 places to get an incredible donut in Montreal.

This retro donut shop in Saint-Henri has been serving up mouthwatering artisanal donuts for years. Their Instagram-worthy creations range from lime coconut and maple bacon, to dark chocolate mousse and raspberry cream cheese.
Where: 640 Courcelle St

Once an online-only bakery, DoughNats opened up a bakery on Decarie last year and has since become one of the most popular donut shops in the city. With over 12 different flavours served daily (as well as vegan and gluten-free options), it’s safe to say you’ll quickly fall in love with DoughNats.
Where: 5319 Decarie Blvd

This French dessert shop in the Plateau specializes in everything from pastries to cakes, but it’s their donuts that are truly the shining stars. Scrumptious flavour combinations like s’mores, tiramisu, salted caramel, and vanilla and cookies are one reason you’ll fall in love with their donuts. The second, they’re all homemade and even use their own top secret special crueller recipe.
Where: 2202 Mont-Royal Ave E

Though La Cornetteria technically specialized in cronuts rather than donuts, we felt compelled to include them on this list since they are so delicious. Stuffed with everything from custard to Nutella, you won’t be able to resist their soft and flaky cronuts.
Where: 6528 St Laurent Blvd

Whether you’re stopping by for coffee or brunch, the beignets on the menu at Lawrence are nothing short of heavenly. Each beignet contains a different filling (chocolate, lemon, and custard), and each one is more delicious than the last.
Where: 5201 St Laurent Blvd