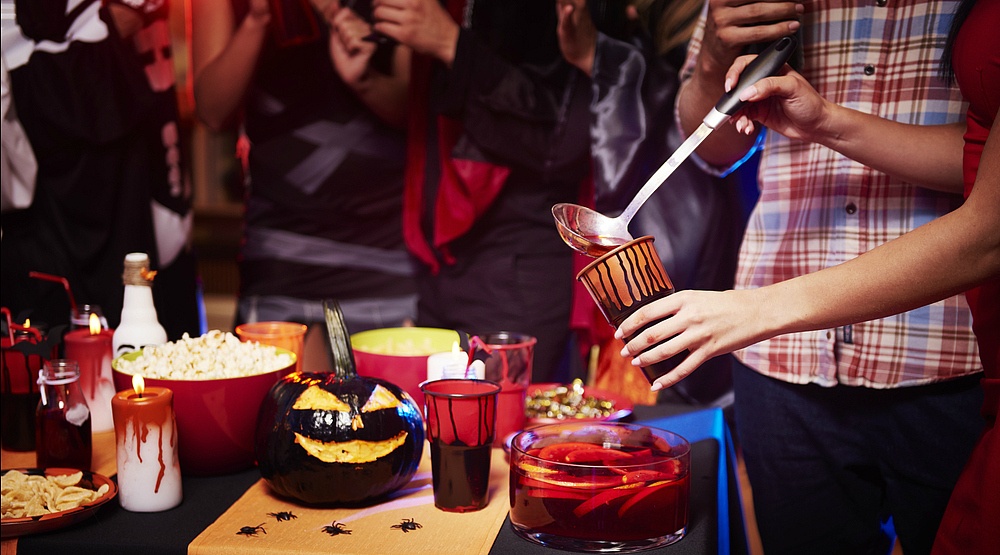 From a plethora of epic Halloween parties to live music shows, here is everything you need on you social calendar this weekend.

Are you a fan of this cult classic? Well whether you are or not, watching The Rocky Horror Picture Show on Halloween is a must. Lucky for you, Montreal does Rocky Horror justice at the annual Rocky Horror Picture Show Halloween Ball. The show takes place at the Imperial Cinema and features a screening of the original movie while a large cast of actors performs live on stage. As per usual, audience participation is actively encouraged. Tickets to this Montreal institution are just $17.95 ($19.95 at the door).
When: October 28, 29, 31 at 8 and 11 pm
Where: Cinema Imperial, 1430 Rue Bleury

LA-based trio LANY return for their headlining show and The Kinda Tour. Together since 2014, they have put together some incredibly catchy tunes (see above) and have recently released their 6 track EP, Kinda.
When:  Saturday, October 29 at 7 pm
Where: Théâtre Fairmount – 5240 Avenue du Parc

The house of Veuve Clicquot present the signature annual Yelloween Halloween party at L’Auberge Saint-Gabriel in Old Montreal. The quirky and glamorous champagne label hosts similar bashes in cities around the world – from Hong Kong to New York, Vegas to Kuala Lampur. Join them at the private Auberge St-Gabriel in the heart of the old port for this year Montreal’s coolest Halloween party!
When: October 29
Where: L’Auberge Saint-Gabriel, 426, rue St-Gabriel

If you love running around playing laser tag then this is a no brainer. In the spirit of Halloween, Laser Quest is hosting their annual White Night Zombies overnight game. The game begins at 11:59 pm sharp and doesn’t end until 6 am the next morning. Be sure to dress in white and wear your best zombie costume!
When: October 29 from 11:59 pm to 6 am
Where: Laser Quest Montreal, 1226 Rue Sainte-Catherine Ouest

Dance the night away at The Living Dead

This event is one of the cheaper Halloween parties in the city, but that doesn’t mean it’s not just as raging. DJs include Dj Bonanza, DJ Masta, and LaFlame, so be sure to bring your dancing shoes (and your scariest costume). Doors open at 10pm.
When: October 29 at 10 pm
Where: Facul T Club, 3556 St-Laurent

Montreal’s official student Halloween party, the Halloween Howler Club Crawl will take Montreal students through the city for a fun-filled night of club hopping. Through the course of the evening, party-goers will be taken to 4 of the hottest nightclubs in Montreal. Tickets start at $28.75 and include VIP entrance to the clubs (no wait times) and bus transportation.
When: October 29, 7 pm
Where: The crawl begins at Bar Frappe, 3900 Boul Saint Laurent

For tech trance lovers, this is the Halloween event of the holiday. This late night music event doesn’t even begin until 11:55pm on October 29th, and ends at 10am the next morning. Presented by Monkey Buzinezz presents an extended party with Glasgow-based DJ Mark Sherry. Get ready to party all night long.
When: October 29, 11:55 pm
Where: Circus Afterhours, 917 Rue Sainte Catherine Est

Rave to the Grave

Entering its 5th year in a row, Rave to the Grave will feature 2 stages, 4 headliners, and a whole night of awesome Halloween fun. Headliners include Virtual Riot, Megalodon, and Chuurch, while the event itself will include live painting, haunted projections, and contests and prizes. Note: the theme is zombies so be sure to dress like a creepy dead person!
When: October 29, 9 pm
Where: TBA

This year, Joverse is hosting a Halloween party Inspired by the hit Netflix series, Stranger Things. The official event page dares Montrealers to “vanish into the small town of Joverse and uncover the mystery.” There will also be supernatural cocktails and some terrifying characters. Be sure to sport your best Eleven costume!
When: October 29, 10 pm
Where: Joverse, 52 Rue Saint Jacques

Monde Ose is at it again, this year with a Halloween theme like no other. The theme of the 2016 Monde Ose Halloween Ball is POP. That’s right, I’m talking about Andy Warhol, Marilyn Monroe, and of course, Campbell’s soup. The event will feature pop art installations, video projections, and burlesque performances. Be sure to dress in your best Marilyn outfit!
When: October 29 at 10 pm
Where: St James Theatre, 265 Rue Saint-Jacques

This Halloween event is Cirque de Boudoir’s most anticipated of the year. Dubbed Montreal’s kinkiest Halloween Party, Black Mass will feature performers, DJs, visual artists, and more. Over 1,200 Montrealers attended Cirque de Boudoir’s 2015 event, so be sure to grab your ticket early.
When: October 29 at 9 pm
Where: Paradox Theatre, 5959 Boulevard Monk

Get tickets to the Tegan and Sara concert at Metropolis

The Canadian indie pop duo are back in Montreal, this time performing at Metropolis over Halloween weekend. The identical twins will be performing songs from their latest album Love You To Death, including their hit single “Boyfriend.” Tickets are general admission and cost $45.
When: October 29 at 8 pm
Where: Metropolis, 59 Sainte-Catherine Street East

Zombie-fy yourself at Montreal’s annual Zombie Walk. If you like blood, gore, and walking funny, then you best join in on one of Montreal’s most fun themed walks. It is absolutely free to join. All you have to do is show up with tattered clothing and your best zombie makeup and make your way through the spooky streets of Montreal. Not the greatest at applying makeup? There will be makeup experts on hand at Place des Festivals starting at 3 pm sharp. $15 will cover a full application of makeup (wounds, gashes, blood and all).
When: October 29, 4 pm
Where: Place des Festivals

For two weeks in October, ExpoRail is going to be completely transformed. Filled with bats, spiders, ghosts, and skeletons, ExpoRail is celebrating Halloween in all its glory. In addition to the fun decor (yes, they’ll even be decorating the trains), children are invited to participate in arts and crafts workshops such as the making of a Halloween mask.
When: Now to November 1
Where: Exporail, The Canadian Railway Museum, 110 St. Pierre St.

Take a haunted tour of Montreal

Forget Old Port, Haunted Montreal Tours are here to show you all the haunted spots in Montreal. With tours of downtown, Grifftintown, and Mount Royal, you’ll soon realize that nowhere is safe in Montreal. From forgotten cemeteries and ghost-infested buildings, to the infamously haunted Club Le Cinq, prepare for your outlook to change on our fair city. All tours are lead by professional actor and storyteller, Donovan King.
When: Fridays, Saturdays, and Sundays in October at 8:30 pm
Where: Downtown, Mount Royal, Griffintown

Get spooked at the Smitheman Family Haunted Yard

The Smitheman Family Haunted Yard is the spookiest attraction in the West Island. Entrance is by donation and all proceeds go to the Starlight Children’s Foundation. Prepare to be scared out of your wits by the incredible decor at this haunted attraction. There will be swamp monsters, werewolves, ghosts, mummies, witches, and of course, lots of candy.
When: Until October 31, 6 to 9 pm
Where: 116 Maywood Ave., Pointe Claire

Put your brain to the test this Halloween at Montreal’s very own escape room game centre, A/MAZE. A/MAZE will challenge you in more ways than you thought possible, and there’s only one way to escape: by solving the puzzle. In a limited amount of time, you’ll have to find clues, crack codes, and solve problems. And as if A/MAZE weren’t already scary enough, each year they add a special Halloween edition to their list of terrifying brain puzzlers.
When: Friday to Sunday 10 am to 10 pm
Where: Various locations

Run through a corn maze at Le Verger Labonté

If you’re looking for a fun weekend with the fam, then you have to visit Le Verge Labonte. In addition to their huge crop of pumpkin and squash, they also boast corn mazes, a children’s playground, a petting zoo, a quaint bistro, and some seriously scrumptious apple muffins.
When: Monday to Friday 1 to 5 pm, Saturday and Sunday 9 am to 4:30 pm
Where: 2291 Perrot Blvd., Notre-Dame-de-l’Île-Perrot

Visit the Gardens of Light

The Montreal Botanical Garden has been lit up at dusk every night since September 2nd, showcasing its gorgeous exhibit of animals, temples, and lanterns. This year’s Chinese-themed exhibit tells the story of the Son of Heaven, a Chinese Emperor. Thus, when you step into the Gardens of Light, you are also stepping into Beijing’s Forgotten City where you can learn about key moments from the Emperor’s life and rule through stunning display of glowing lanterns, cranes, pandas, fish, dragons, giraffes and turtles. The exhibit ends on October 31, so why not spend this Halloween taking in one of Montreal’s most beautiful art installations?
When: September 2 to October 31, every day from 9 am to 9 pm
Where: Montreal Botanical Garden, 4101 Rue Sherbrooke Est