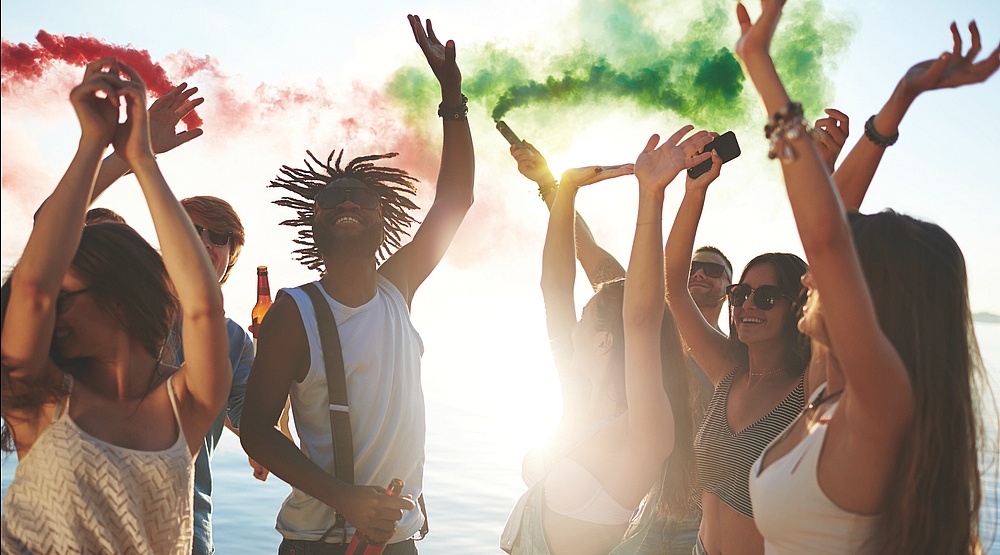 The summer just keeps on rollin’ in Montreal.

From foodie events to the pride parade, you have plenty of options for how to spend the weekend.

What: Explore a unique festival that will allow you to discover Polish culture, music, and food. Some things on the menu include live music, cooking workshops, family zones, polka dance classes, kielbasa eating contest, and much more! A truly fun festival for everyone!
When: August 13 and August 14
Where: 1820 Dorion St.

What: The Colour Run Canada is back in our fair city for another year. This year’s tour, the Colour Run Tropicolour World Tour, will be in town on August 13th. This year’s race includes a tropicolour zone, a rainbow beach at the finish line, and a runner’s kit filled with island-themed goodies. Think leis, pineapple, and white sand. The run is 5km and is a great activity for you and your friends!
When: August 13
Where: 1 Circuit Gilles Villeneuve

What: Celine Dion has temporarily left Vegas and is back in Montreal for a whole slew of shows this August. With shows remaining on August 9, August 12, August 13, August 16, and August 17, you have exactly five more chances to see this incredible French-Canadian singer in the flesh. The concerts are all held at the Bell Centre and tickets start at $75
When: August 13 at 8 pm
Where: Centre Bell, 1909 Avenue des Canadiens-de-Montréal

What: Get ready to sweat at Montreal’s very own extreme obstacle course. Designed by former U.S. Marine Drill Sergeant, Tony A., the Gatorade O Course promises to challenge you both mentally and physically during its 2.5 hour span. The best part? Gatorade Canada teamed up with The O Course to bring you the 2016 summer series completely free of charge!
When: August 13, 9:30 am until 12 pm
Where: University of Montreal, 2900 Boulevard Edouard-Montpetit

What: The first ever Lego Imagine Nation Tour is coming to Canada this year and will make a stop in Montreal for three whole days. Arriving on August 12th, the Lego Imagine Nation Tour is an interactive event for people of all ages. The event will allow visitors to take pictures with life-size Lego models, play in the huge Brick Pit, and learn new building tips and tricks alongside a Master Model Builder in the Master Builder Lab.
When: August 12 to 14,
Where: Palais des Congrès, 1001 Place Jean-Paul-Riopelle

What: This summer, enjoy a delicious way to benefit the Big Brothers Big Sisters of West Island! Mark your calendars for August 12-13-14, 2016 and come by Pierrefonds-Roxboro Borough Hall for great ribs and a great time!
When: August 12 to August 14
Where: 13665 Pierrefonds Blvd

What: This summer be sure to check out Montreal’s grittiest art festival: the Under Pressure Graffiti Festival. Celebrating its 21st year, Under Pressure runs from August 10 to 14. As the largest graffiti and hip hop festival in North America, Under Pressure is one of the best summer festivals in Montreal. Events such as street dance battles and documentary screenings will be taking place the week prior, however, the majority of the fun will take place on the weekend (August 13 and 14).
When: Until August 14
Where: Various locations

What: Head to Tremblant for the weekend to experience a weekend of total spiritual zen. Choose your own adventure with multi-level yoga and meditation sessions, mouthwatering organic and whole foods, heart-pumping music, inspiring lectures and workshops, and boundary-pushing outdoor activities.
When: August 13 and August14
Where: Tremblant

Make your way through 400 acres of escape land made up of fields, trails, rivers, hills, and mud in Montreal’s Prison Break Race. Simulating an actual prison break, participants will be running past police officers as they try to gain back their freedom. The Montreal race takes place at Terre des Bisons in Rawdon, Quebec and the cost of a ticket includes a beer, a t-shirt, energy drinks, a medal, and admission to the post-race party.
When: August 13 and 14
Where: Terre des Bisons, 6855 Chemin Parkinson, Rawdon

What: A Matinee Brunch event in collaboration with @maninacreative bring you “LUSH”! This brunch party will be held at The Hotel 10 Terasse on Sunday August 14th. Get ready to be transported to Montreal’s version of Paradiso in the city! Music by Matinee’s very own Danny Torrence and Toddy Flores. This event will definitely sell out quickly so please send in your requests as soon as possible and get ready to party like it’s Vegas.
When: August 14
Where: HOTEL 10, 10 Sherbrooke Street West, Montreal,

What: Celine Dion has temporarily left Vegas and is back in Montreal for a whole slew of shows this August. With shows remaining on August 9, August 12, August 13, August 16, and August 17, you have exactly five more chances to see this incredible French-Canadian singer in the flesh. The concerts are all held at the Bell Centre and tickets start at $75
When: August 9, 12, 13, 16, 17 at 8 pm
Where: Centre Bell, 1909 Avenue des Canadiens-de-Montréal

What: Montreal Pride Week is happening right now. There are tons of fun events going on in the city, but if the parade is what you’re most looking forward to, the annual Pride Parade is happening on August 14th. The 2016 theme is “Our Flag, Our Nature: Green,” which means you can expect the floats in this year’s parade to be green in theme. The parade is scheduled to begin at 1 pm on the corner of Saint Mathieu. From there it will travel east on Rene Levesque Boulevard, finishing at Sanguinet Street. Be sure to get there early.
When: August 14
Where: Various locations