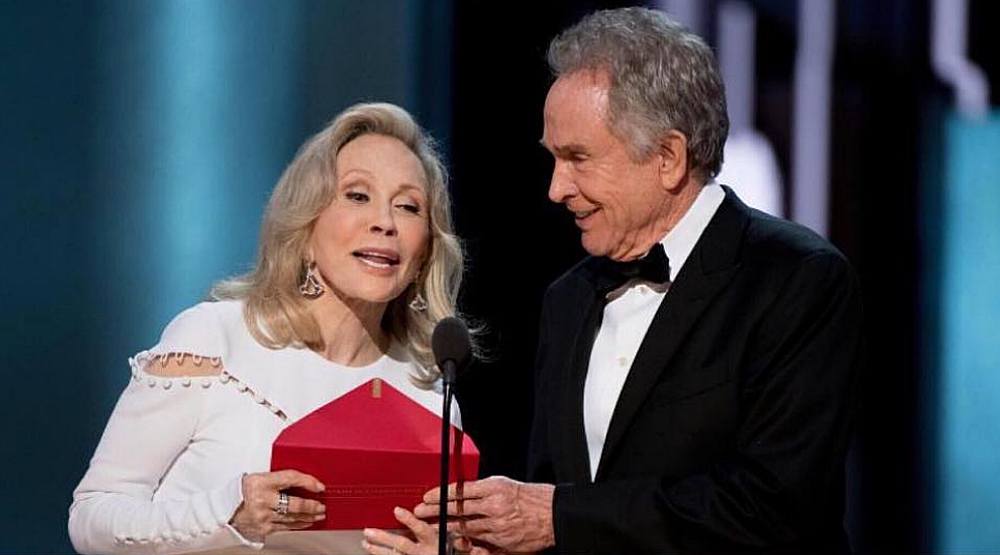 Nothing served to highlight ageism more last night than the public reaction to the Best Picture mix-up and what many immediately perceived as a “senior moment” for presenters Warren Beatty and Faye Dunaway.

While host Jimmy Kimmel alluded to Hollywood’s continued dislike of older people — particularly women, who are never allowed to age without some level of ridicule and scrutiny leveled against them — by cracking a joke early in the show about how the movie industry “doesn’t discriminate based on someone’s nationality, but based on their age and weight”, it was only the final few moments of the 89th Academy Awards that served to highlight people’s rampant ageism on social media.

In what was probably the most bizarre and confusing moment at the Academy Awards ever, Faye Dunaway, on stage with Warren Beatty, announced the wrong best picture winner, leading everyone watching at home and in the audience to believe that La La Land had won for a brief few moments. Then, in a shocking turn of events, we all found out that it was in fact Moonlight that walked away with the coveted trophy.

After the dust settled, it was revealed that Beatty and Dunaway had been given the wrong envelope, containing the name of the previous winner (Actress in a Leading Role: Emma Stone from La La Land), hence the confusion.

Even though the snafu had absolutely nothing to do with Warren Beatty (who looked at the card in the envelope, looked at Faye, and then looked at it again with a confused look on his face because he suspected something was wrong), or with Dunaway who simply read what was on the card and announced La La Land as the winner, people’s ageism started to show on social media almost immediately.

To be fair, Warren Beatty was supposed to go to bed, like, four hours ago. #Oscars

In Warren Beatty's defense he read the envelope they handed him. It wasn't his fault. He's old and it's really late #Oscars

Warren Beatty and Faye Dunaway are like 137 years old why would you let them do anything at The #Oscars without adult supervision …..

The best reactions to the biggest Oscars f*ck up of all time https://t.co/538QCi6tE6 pic.twitter.com/Vm0jbYd28p

Closer to home, the Journal de Montréal’s very own Richard Martineau, no spring chicken himself last time I checked, felt the need to weigh in too with some major senior bashing.

The shocking turn of events prompted many people on social media to research Warren Beatty from his Bonnie and Clyde days, only to discover to their utter shock and disbelief that older people were also once young – and very, very hot.

ok i just made the mistake of googling "young warren beatty" and…. good lord… 😳 pic.twitter.com/IyNJ7bQQQs

Yes, mix-ups happen, and this is a particularly egregious one, but the truth of the matter is, that if this embarrassing snafu had taken place with two younger presenters on stage, no one would have attributed their confusion to their age or a sign of suspected senility. It’s only old people who are perceived as slow, as if their slower reflexes or diminishing eye sight are immediate and undeniable signs of intellectual deterioration. They aren’t.

Ageism, stereotyping and discriminating against individuals or groups on the basis of their age, has become the most socially acceptable form of discrimination in our youth-obsessed society. Somehow, down the line, we convinced ourselves that the constant pursuit, preference, and valorization of youth equates to it actually having some sort of intellectual, tangible, or moral value. That, somehow, someone being young is a virtue on its own, instead of simply a different stage in one’s life. We overvalue youth and undervalue the experience and wisdom of older people.

Despite what many younger people reading this might believe, you will be amazed to find out one day that getting older happens much quicker than you ever imagined. You blink and you go from someone in your 20s to someone in your 40s, and, yes, you are a different person, but you are very much still the same.

To think that aging robs you of your skills and abilities and sense of humour or sense of adventure is absurd. Of course, much depends on how much you take care of yourself (“use it or lose it” has never been truer than in people who are getting older), but in most cases the prejudices against old people have nothing to do with their loss of abilities, but is merely a reflection of so much undeserving value placed on youth. This notion that innovation and creativity can only be found in young people is absurd! Some of the most boring, least adventurous, least intellectually stimulating, self-absorbed, constantly-doubting-themselves people I’ve ever met were folks in their 20s and 30s.

There’s a really good piece recently published in Linkedin that discusses youth obsession in the marketing and advertising world, entitled Why I miss old people in the Workplace. It’s worth reading, considering ageism seems to be rampant these days.

“Don’t get me wrong a lot in advertising has changed, but what we really need now is the wisdom to separate the gimmicks from the profound. We’re endlessly told by 26-year-olds at SXSW that television is dead, or that the purchase funnel no longer exists, or that people want to have conversations with brands. These quasi ad celebrities with their 16,000 twitter followers beat the drum on the march towards progress, but few people are wise enough to question their wisdom.”

What the author is trying to say is that it takes more than a sleeve tattoo, a hipster wardrobe, and a flourishing Instagram account to offer something to a company. And that looking beyond the social darlings of today’s youth-obsessed corporate world is often very wise.

At the end of the day, it wasn’t “old farts” Warren Beatty and Faye Dunaway (as so many gleefully called them) who were responsible for the mix up, but probably some mortified 22-year-old intern in the back, so let’s cut everyone some slack and perhaps let our knee-jerk reaction open our eyes to our own latent ageism.