The trial began back in September, and the jury had been deliberating since January 11 in Sherbrooke, QC.

According to Transportation Safety Board of Canada’s (TSBC), the derailment happened at approximately 10:50 pm. The eastbound train was travelling with 7.7 million litres of petroleum crude oil in 72 cars and 5 locomotive units when it derailed at the Rue Frontenac road crossing in Lac-Mégantic, Quebec.

The trains originated in North Dakota, and were bound for Saint John, New Brunswick. 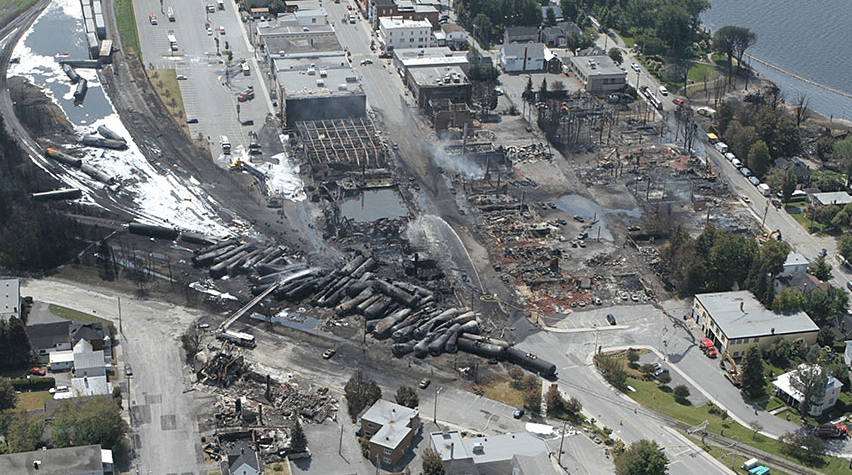 In keeping with the railway’s practice, after arriving, the locomotive engineer parked the train on a descending grade on the main track, and a replacement engineer was scheduled to continue the trip east in the morning.

The TSBC report states that while the engineer applied hand brakes on all five locomotives and two other cars, he did not shut down the lead locomotive.

After the engineer left, the Nantes Fire Department responded to a 911 call reporting a fire on the train. The fire was extinguished and with all the locomotives shut down, the air compressor no longer supplied air to the air brake system.

“As air leaked from the brake system, the main air reservoirs were slowly depleted, gradually reducing the effectiveness of the locomotive air brakes. Just before 1 am, the air pressure had dropped to a point at which the combination of locomotive air brakes and hand brakes could no longer hold the train, and it began to roll downhill toward Lac-Mégantic, just over seven miles away,” reads the report.

The train picked up speed and derailed near the centre of the town at about 1:15 am.

Along with the 47 people killed, 2000 people were forced from their homes, and much of the downtown core was destroyed.