Much of Canada is in for a “winter to remember,” according to The Weather Network.

After a “wild pattern” this fall that consisted of blizzards, record cold and record heat across Canada, The Weather Network has released their winter forecast looking ahead to December, January, and February.

“This winter will feature a wide variety of extreme weather across Canada,” said Chris Scott, Chief Meteorologist at The Weather Network.

And that includes “severe” cold, and potential record warmth.

“The focus of the severe cold will be across western Canada, especially during January and February. Meanwhile, extended periods of mild weather are expected from the Great Lakes to the Maritimes with the potential for record warmth. However, arctic air will also push into these regions from time to time, and an active storm track coast to coast will deliver an abundance of snow and ice to most of Canada.”

So, what will winter look like where you live? 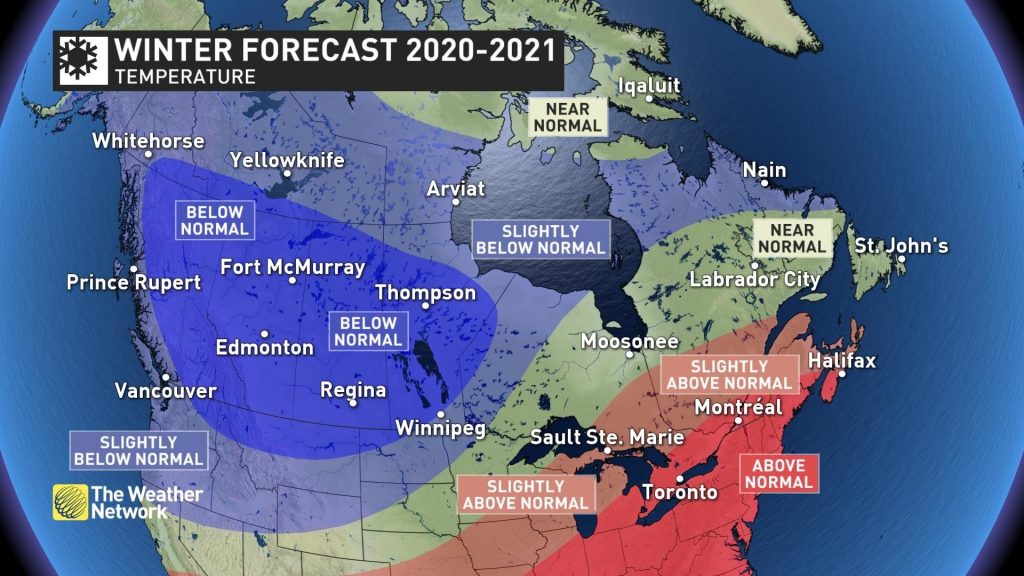 For those on the west coast, expect colder than normal weather conditions across BC, especially during January and February, when there is expected to be “a heightened risk for extended periods of frigid weather and heavy snow.”

“Above normal precipitation is expected for southern parts of the province, and an outstanding ski season is anticipated with an abundance of fresh powder to enjoy,” says the extended forecast.

Looking east, winter weather is expected for a period in December, but the long-term forecast expects January and February to bring extended periods of very mild weather. “However, the frigid air to the west will attempt to press into the region at times, and an active storm track across the region will bring a heightened risk for major winter storms with heavy snow, ice, and rain,” says The Weather Network.

As well, Northern Ontario “will be the battle zone between frigid weather to the west and mild air to the south. This will result in changeable temperatures and near to above seasonal snowfall.”

The Prairies can expect a frigid winter. “While the first half of December will bring periods of very mild weather, we expect that this region will lock into a much colder pattern for January and February with a heightened risk for extended periods of severe cold,” states the outlook.

The Weather Network says a snowy winter is also expected across the southern half of Alberta and parts of southern Saskatchewan; meanwhile, near-normal snowfall is expected elsewhere.

The Maritimes can expect a mild pattern this winter, primarily during January and February. The outlook says that near-normal temperatures are expected for Newfoundland. “An active storm track will bring above normal precipitation to much of the Maritimes and near normal precipitation to Newfoundland and Labrador,” says The Weather Network. “However, a variety of different storm types and tracks are expected with a heightened risk for rain and ice at times.”

So bundle up, Canada.

Because ready or not, winter is coming.