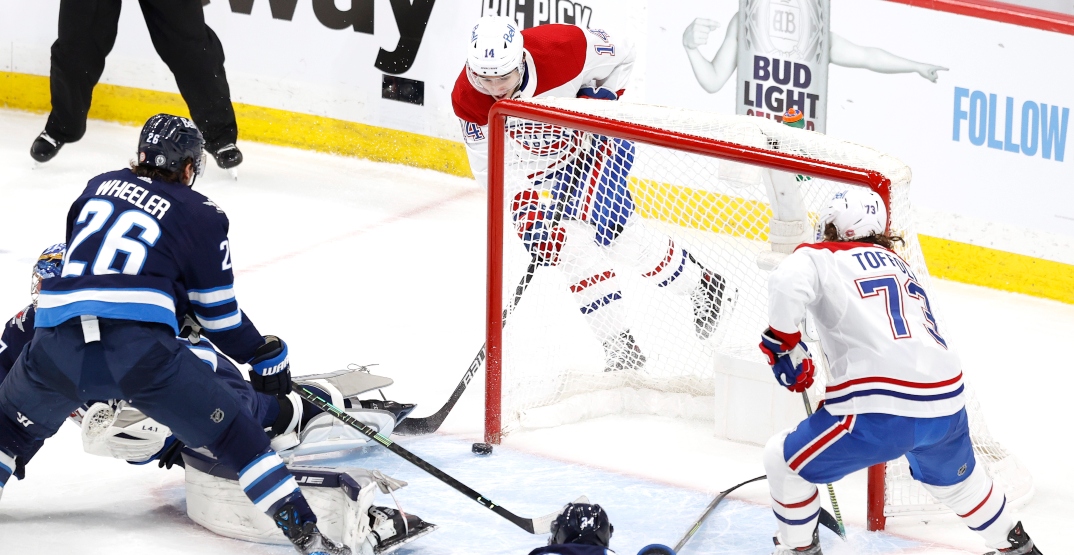 The Montreal Canadiens drew first blood in their second-round series against the Winnipeg Jets, pulling out a 5-3 win in Game 1 at Bell MTS Place on Wednesday.

The shots were 12-11 for Montreal after a first period that featured somewhat surprisingly wide-open hockey between these two teams. Jesperi Kotkaniemi’s fourth goal of the postseason opened the scoring for Montreal early in the opening frame.

Not long after, Eric Staal extended the Canadiens’ lead to 2-0. Adam Lowry scored a shorthanded goal for the Jets later in the period, but Suzuki’s goal restored Montreal’s lead to two.

Derek Forbort pulled Winnipeg back within a goal in the third period, but Brendan Gallagher responded on the power play to make it a 4-2 game for the Canadiens.

Kyle Connor scored for the Jets with under two minutes to go to before Jake Evans sealed things with an empty-netter — and took a brutal hit from Mark Scheifele in the process.

Scheifele received a five-minute major for charging and a game misconduct, while Evans was stretchered off the ice.

This game marked the first time in these playoffs that the Habs scored more than three goals in regulation.

Just 3:30 into the game, Kotkaniemi redirected a Jeff Petry shot past Connor Hellebuyck.

An early lead thanks to Kotkaniemi's 4th of the postseason! #GoHabsGo pic.twitter.com/QpbBR8dVRw

Less than two minutes later, Corey Perry took a hit to make a pass to Staal in front of the Winnipeg net, and Staal rewarded Perry’s efforts by making it a 2-0 game.

With the Canadiens on a power play later in the period looking to make it 3-0, Lowry instead pulled the Jets back within one with a shorthanded goal.

Suzuki’s goal gave the Habs their two-goal lead back, and the score stayed 3-1 until Forbort brought the Jets back within a goal with just over 10 minutes remaining in the third period.

Not even two minutes later, though, with Montreal on a power play, Gallagher put home a rebound after a Shea Weber breakaway (!) to give the Habs their insurance marker back.

We don't often expect to say: "Weber on a breakaway, followed by Gallagher…" but hey!#GoHabsGo pic.twitter.com/XhnvynedfH

Gallagher scored for the second straight game after being held without a point for the first six games of the playoffs.

The win was the Canadiens’ fourth straight since falling behind 3-1 in their first-round series against the Toronto Maple Leafs. It was the Jets’ first loss of these playoffs after sweeping the Edmonton Oilers in the first round.

Wednesday’s loss was a costly one for Winnipeg on multiple levels. Not only were the Jets without Paul Stastny due to an undisclosed injury, but defenceman Dylan DeMelo also left the game with a lower-body injury in the first period and did not return.

Scheifele could also be facing a suspension for his hit on Evans.