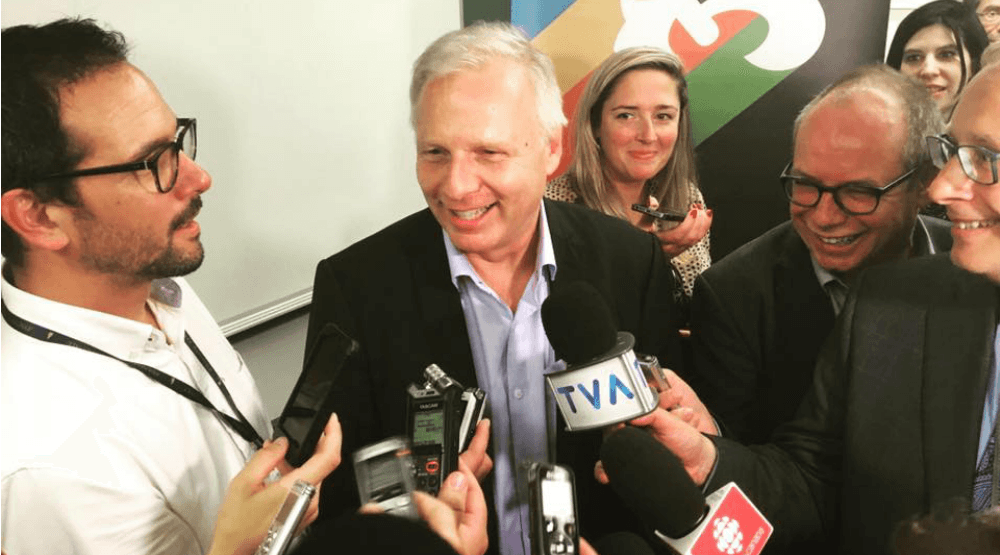 PQ leadership candidate Jean-François Lisée went viral yesterday, but perhaps not in the way that he would have wanted to.

Presenting his case for Quebec prosperity at a press conference Monday morning, Lisée stated that immigration only has a marginal effect on the province’s economy and that fewer immigrants, but also “better” immigrants should be accepted.

I’m actually not averse to the “fewer immigrants” suggestion. There’s no real point in accepting more immigrants if we don’t have the ability to utilize their skills and offer them the means to succeed, and, in return, contribute to Quebec society.

Right now, most studies conclude that current government budgets are insufficient to properly train, integrate, and utilize them. Underfunding continues to be a major problem and only a small percentage of immigrants end up benefitting from integration programs. The Liberal government’s austerity measures, which have contributed to a decrease by 25 per cent of French immersion programs offered to immigrants is certainly not a step in the right direction.

For a more extensive analysis on the issue, I recommend « L’intégration des immigrés sur le marché du travail à Montréal: politiques et enjeux » by Marie-Thérèse Chicha and Éric Charest and published by the Institute for Research on Public Policy.

It’s the latter part, however, of his two-pronged declaration that got Lisée in hot water. According to him, “the best possible immigration are workers like the ones Quebec recruits from Paris, Brussel, and Barcelona, which correspond perfectly with the employment demands, who are immediately hired, and immediately integrated.” That, as far as he’s concerned, constitutes “perfect immigration.” He later threw Shanghai and Senegal, among others, into the mix, but by that point it was too late. It read like an afterthought.

I knew the minute I read that statement that Lisée was going to experience a backlash. You can’t discuss “perfect immigration” and immediately point to Europe. It’s what isn’t said that will immediately become the focal point over what was said, and the implication in such a statement is that “good, successful, desirable” immigration is one primarily composed of people who look like us, talk like us, pray like us, have the same “value system” like us.

It doesn’t matter that it wasn’t even really the point he was trying to make. His full statement is much more nuanced than that and deserves to be read in its entirety (I agree with him that media should have done a better job of clarifying his statements) but I’m still baffled as to why a politician as experienced as he is wouldn’t understand the immense power of words to shape perceptions. Once you’ve started with three European examples in a row you are validating the prejudices of many and reinforcing the notion (even unintentionally) that “good immigration” carries a European passport and the picture of that passport holder is most likely going to be white.

This is a brutal association to make (even implicitly) when myriad of immigrants who are visible minorities struggle with racism and discrimination on a daily basis. With that alone in mind he should have made a conscious effort not to enumerate three examples from Europe right off the bat. But, unfortunately, he didn’t.

The simple reality is that the “better immigrants” he mentioned who are better integrated and find employment quicker, aren’t “better” because their predominantly European, white, and Christian backgrounds make them better-calibre immigrants, but because they are given a better chance through Québec International work programs. Also, racism. More later.

Immigration is a long and arduous process. High unemployment rates and skill devaluation continue to be real problems for immigrants. A study just released today by the l’Institut de recherche et d’informations socio-économiques (IRIS) reveals that immigrants continue to be discriminated against in the workforce, continue to be underpaid and underutilized.

To his credit, Lisée did bemoan the lack of utilization of immigrants’ skills in his statement. Countless studies have demonstrated that, although educational credentials among recent immigrants are higher on average than those of Canada’s native-born workforce and are rising, the trends in immigrants’ employment and earnings are downward. This suggests that the real problem isn’t their skill levels, but rather the extent to which these skills are accepted and effectively utilized in our workplace.

And can you guess what is partially to blame for preventing many Quebecers from better accepting and utilizing their skills? Like it or not, prejudice against them

This past January, the Montreal Gazette published a piece on immigration where Daniel Boyer, president of the Quebec Federation of Labour (FTQ) was quoted as saying during the opening day of hearings into Bill 77, an act to modernize Quebec’s immigration system: “Listen, there is discrimination, there is discrimination and racism, in the employer ranks, in ours, it’s not a simple problem.

“People of Maghrebin origin are well educated, often francophone, yet they don’t find work,” he continued.

The article continues: “It’s not the first time the government has been told about the discrimination problem. The Quebec Human Rights Commission presented data a year ago showing the unemployment rate in Quebec for immigrants is twice as high as for the rest of the population and three times as high for immigrants who are visible minorities.

Studies have shown a Quebecer with a franco-Quebec-sounding name like Simard or Trémblay has a 60 per cent better chance of getting a job interview than someone named Ahmed or Carlos.”

Now, taking in consideration the above information, tell me that Lisée’s unfortunate initial trifecta of Euro-centric destinations wasn’t adding insult to injury. When he chose to prioritize places where the likelihood of visible minorities is smaller, and the likelihood of names like Simard and Tremblay is higher, it sent a message. Even perhaps one he didn’t intend to send.

When La Presse and the Journal de Montreal reported on his press conference, emphasizing his questionable comments on immigration, the criticism was harsh and immediate, and it came from both sides of the linguistic fence, and even from within his own party. It was a gaffe, a bad choice of words, and one Lisée should have probably owned and moved on.

For the record, and despite the non-stop Twitter attacks by Lisée supporters I’ve been subjected to, who think that by calling him out on that statement I think he’s racist (I don’t), who think I’m a hard core Liberal (LOL), an anglo federalist (I’m not), a dumb blonde (nope and nope) and feel slighted that he’s being treated unfairly, I’m actually just observing the PQ leadership race with detached interest. I have no horse in the race.

I do, however, think that his comment was highly unfortunate and allowed for the further stigmatization of immigrants of colour, which in turn directly affects their employability and integration. It also allowed for some very legitimate statements Lisée made to be lost in the shuffle.