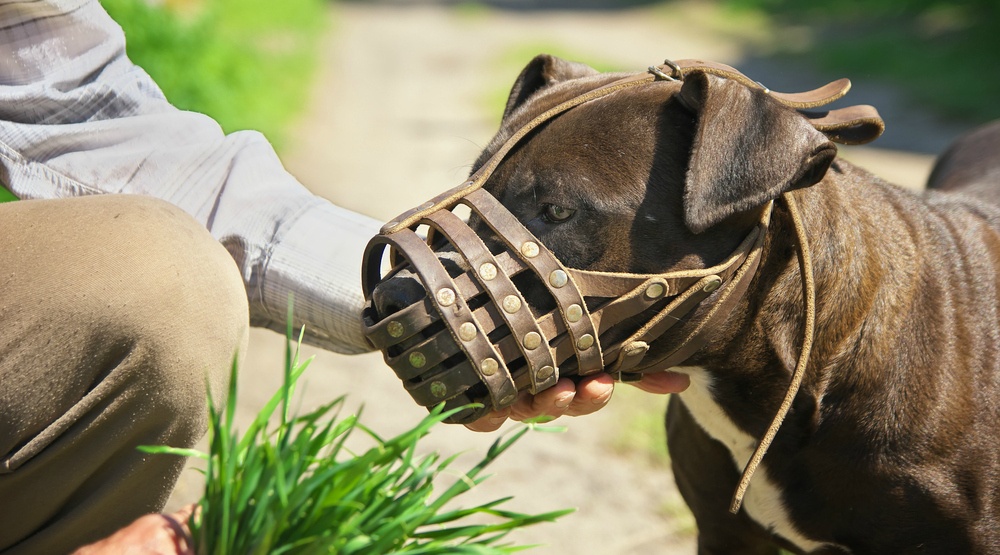 I write about politics and women’s issues a lot, so I’m used to waking up to nasty comments in my inbox. The comments this morning were, once again, exactly where I find them, and they were plenty angry, but this time around the target wasn’t me.

It seems Montreal mayor Denis Coderre and the majority of Montreal City Council won’t be winning any popularity contests anytime soon. At least, as far as dog lovers are concerned.

Breed specific legislation (BSL), targeting specific pit bull-type dogs, was passed at City Hall this past Tuesday, by a vote of 37-23, prompting the local SPCA to launch legal proceedings to challenge the proposed bylaw. It was just confirmed a few hours ago that the court challenge will be heard by court officials this coming Monday, Oct. 2.

The ban quickly made national and international headlines, and even singer Cindy Lauper took the time to voice her displeasure on Facebook, while new petitions are floating around with renewed vigour.

Under the new law, going into effect Oct. 3, it will now be illegal to own a pit bull-type dog that hasn’t been registered under a special ownership permit by December 31, 2016. The new bylaw essentially means that current pit bull owners will be allowed to keep their dogs, but no new pit bull-type dogs will be allowed to be adopted, which means that countless heathy dogs will be euthanized just because they’re the “wrong” breed, according to Coderre’s administration.

Among the many new restrictions, pit bull-type dogs will also have to be muzzled at all times when outdoors, which is creating countless of issues for behaviourally sound dogs who simply don’t understand what’s going on all of a sudden, as well as immediately stigmatizing them as vicious to all passersby, creating a vicious circle of increased negative perceptions of the breed.

An interesting point (worth mentioning, even if it affects a fraction of dog owners) that was brought up on an online thread by someone who works with the homeless is that many homeless minors who own pit bulls will no longer be allowed to own them, and the homeless who can, will be forced to muzzle them 24/7, which is absurd and inhumane.

Tess Fragoulis has had Marlo for close to a year now.

“I rescued her from Ontario because of their ban,” she explains. “She’s registered as an Amstaff cross, so I’m one of the ‘targets’ of this law. I bought the muzzle and we’ve been working with it, but it’s been hard and I don’t know how we will adapt — both of us. Also, the harness provides less control than her collar did. I am stressed and preoccupied, and have put in countless hours writing to politicians, going to meetings and protests.” 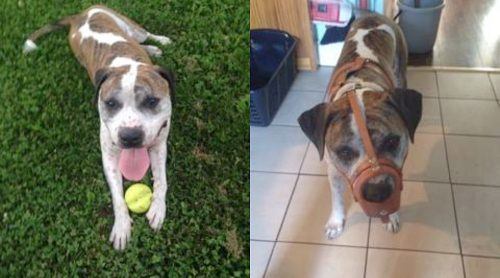 Hannah Clayton, who owns 3 1/2 year-old Calisi, has had her since she was eight weeks old. She resides in the Yukon, but felt compelled to write to inquire about ways to contact Montreal City Hall, in order to offer better suggestions than a ban.

“Dog breeding should be made a compulsory trade,” she says. “Make it x amount of years with x amount of experience and training required before you can legally breed dogs. Same goes for dog ownership. In order to own a dog, you should have to legally agree to do a set amount of training and socialization with your dog before you are allowed a license to own a pet, or the pet goes back to the breeder. […] Eventually people would actually have to think about whether a dog would be a good fit, as they would be on waiting lists to get a dog from a licensed breeder, giving people ample time to prove they are worthy and see if they are indeed ready for it. This way, there would be no more accessory breeding of dogs, backyard puppy mills, dog fighting rings and so on.”

Clayton doesn’t think it would be that hard to fix the problem of unfit dog owners if everyone worked together to implement better rules (many similar solutions, by the way, have been suggested by the SPCA to no avail) and finds it unacceptable that this legislation passed with only 61 per cent of the vote.

“I can flip a coin and get those odds,” she says. “If you are going to murder thousands of innocent lives you should have a 100 per cent vote. At the very least, those numbers should make Montreal City councillors who voted for it, question themselves.”

Clayton offered video proof of the daily interaction between Calisi and her rabbit Donkey and it was clear only the latter was guilty of vicious attacks.

“She is such a kind soul,” she added. “This bully ban blows my mind. Hopefully it motivates everybody enough to make something good come out of it.”

Montreal resident Joe Pilotte rescued his pit bull Enzo five years ago and has absolutely no plans to muzzle him, despite the new legislation.

“Enzo has never been aggressive, has never bitten anyone,” says Pilotte. “There are laws and then there’s just going way too far. My dog has been neutered, we’re microchipping him, paying for all the new tags, I will walk him on a one-metre leash as required, but I refuse to muzzle him,” he says defiantly.

“Ever since he was a pup he walks everywhere outside with a ball in his mouth,” he explains. “How is he supposed to do that if I muzzle him?” 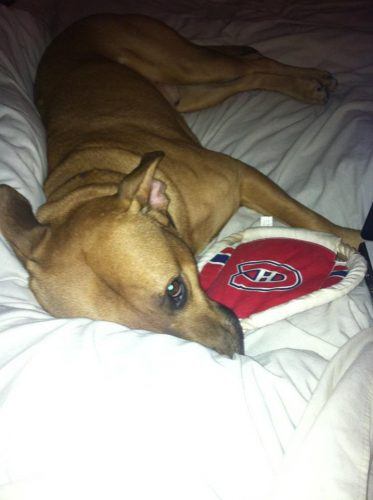 The anger and the frustration of pit bull owners and animal lovers are palpable when you speak to them or read their comments on social media. People are heartbroken and feel helpless to do anything about this.

And while many are quick to respond that this is simply too emotional of an issue and that dog owners should take a step back and assess the situation with a clear head (implying that emotion has trumped reason), most of the owners’ disillusionment stems from that exact fact: that no real scientific proof has been put forward to confirm that breed-specific legislation (BSL) actually works and peer-reviewed studies have shown that bans are not proven to reduce dog bites. In other words, science actually supports those against the ban and in favour of solutions put forth by the SPCA.

But those solutions require money, vigilance, a long-term commitment, and a concerted focus on bad dog owners and a ban is so much easier to implement.

Or so mayor Coderre thought.

“This has also really politicized me, and I feel it opened the window to all the other unreasonable and uninformed things this administration is up to,” Fragoulis concludes, mirroring similar comments from Montreal residents who seem intent to vote in the next municipal election with this legislation very much on their minds.

And while mayor Coderre and his administration might be hoping this issue slowly dies down, the impending lawsuit and the community outrage might indicate otherwise.