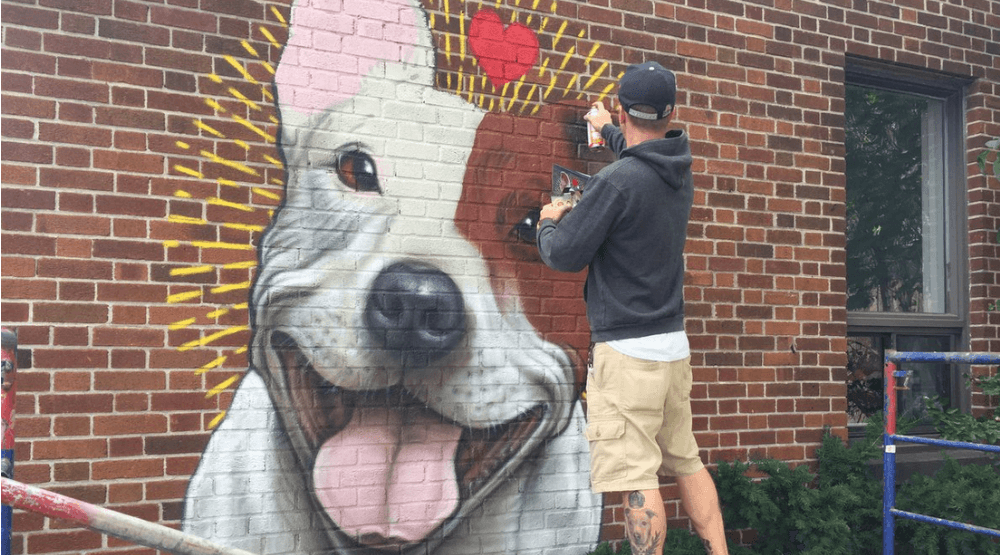 The artist that created a provocative pit bull mural in protest of the city’s impending pit bull ban is at it again.

Montreal artist, Jean Labourdette painted his first mural late last month at Station Beaubien, in which he depicted a pit bull’s head on a human’s body releasing a dove. Of the mural, Labourdette stated, “I’m trying to send out a message to people here to wake up, and to the world: look at what’s going on here in Montreal. Rather than just the city imposing their opinion on all of us, on all the citizens, based on no scientific evidence, just on their will.

Labourdette also stated that the August mural would not be his last. And he has kept to his word.

Earlier this week Labourdette painted yet another mural, this time in collaboration with the SPCA.

Labourdette’s latest mural is of a pit bull’s smiling face surrounded by yellow rays and a red heart. The mural has been painted on the wall of the Montreal SPCA.

This mural is part of a large communications campaign run by the SPCA in an attempt to persuade the government to overturn the pit ball ban that is set to come into effect in Montreal on September 26th.

This mural comes in the wake of the SPCA’s decision to no longer include dogs in the animal services they provide if the bylaw goes through.

With less than two weeks left until September 26th, the deadline is looming. Only time will tell how the City will react to the outpour of support for pit bulls in Montreal.