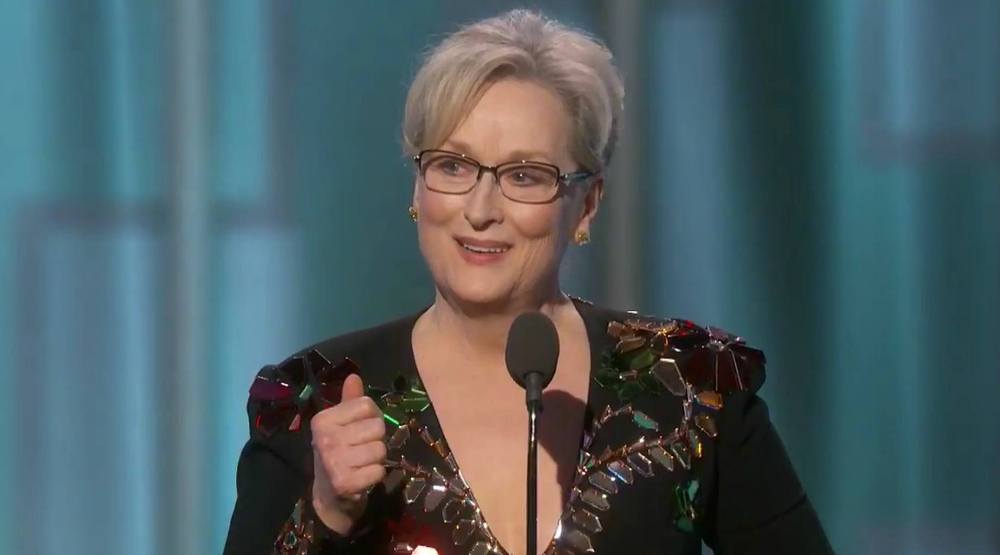 I love Awards shows. I love the Hollywood glitz and glamour of the red carpet, the beautiful fashion and, most of all, I love the acceptance speeches. Whether awkward or compelling, emotional or stunned, people are just so endearing when they’re genuine on stage.

But occasionally we get to watch something that completely transcends fun entertainment and enters “it matters” territory. Last night’s Golden Globes were that kind of night, as one compelling speech after another placed the emphasis not on superficiality, but on substance.

And most of these compelling speeches were delivered by women who by industry standards are well past their Hollywood “prime”, but chose not to notice. They stood up and celebrated wisdom, perseverance, grace, success, being comfortable in their own skin, intelligence, acceptance, and not a single one made a single mention of beauty or looks or sex appeal.

And we who were watching were moved, inspired, but most of all a little bit grateful that, perhaps, for a brief moment, everyone was in awe of women in their 40s, their 50s, and their 60s – a celebration of brains and bravado over youth and beauty. For a brief moment last night all the coolest people in that room weren’t the barely-out-of-their-teens starlets and sex goddesses with their breasts hanging out of their impossibly tight dresses (the way Hollywood executives like them), but three women well into middle and old age who spoke with the intelligence, confidence and wisdom that only comes with age, if you’re lucky to get there.

Because, make no mistake, those were more than speeches. Those were messages of acceptance and self-love, messages of diversity and inclusiveness. Messages that women around the world taught to hate everything about the way they look and the aging process so desperately needed to hear.

Early in the evening Tracee Ellis Ross (Diana Ross’s daughter for those who may not know) started the trifecta of inspirational speeches when she went on stage to accept her award for Best Performance by an Actress in a Television Series – Comedy. In an enthusiastic tone she went on to accept her award (the first for an African American actress in this category since 1983 for Fame) by focusing on diversity.

“This is for all the women, women of colour, and colourful people, whose stories, ideas, and thoughts are not always considered worthy and valid and important. But I want you to know that I see you. We see you. It is an honour to be on this show ‘Black-ish’, to continue to expanding the way we are seen and known, and to show the magic and the beauty and the sameness of a story and stories that are outside of the where the industry usually looks.”

She then enthusiastically looked around the room and gave a comfortable and accepting nod to aging by exclaiming: “It’s nice at 44. I like it here.”

Next up, was the formidable Viola Davis, who at 51 has only in the past decade really come into commercial success with breakout roles in The Help and How to Get Away with Murder.

In presenting Meryl Streep with the prestigious Cecil B. DeMille Award, Davis spoke of her personal and professional admiration of her and in a moving introduction said: “You make me proud to be an artist. You make me feel that what I have in me, my body, my face, my age, is enough.”

This is no small thing. We live in a world where women are sexually objectified, always scrutinized, and always found to be wanting, where they’re not allowed to get old. Where they’re damned if they get plastic surgery and Botox to stave off the signs of aging (“what did she do to her face?”, “why didn’t she age gracefully?”) and damned if they don’t (“She’s looking old”, “she’s looking tired”, “she’s trying too hard”).

To have an actress in her early 50s turn to an actress who has not only survived, but has thrived, in a brutally sexist, ageist, and superficially vacuous industry such as the movie industry, and is still just as productive, relevant, and gorgeously content in her own visibly aging skin at the age of 67, and thank her for allowing her to feel that she, too, might be good enough as is (“my body, my face, my age”), is no small thing for women or men to hear. There is power in those words.

Finally, what can I say about Meryl Streep’s speech that hasn’t already been said. In a scathing and fiery monologue, and without even mentioning Donald Trump by name, she made a compelling speech about the power of art and artists to heal, to unite, and to celebrate our common humanity, she called out Trump’s bullying of a disabled reporter (which he continues to deny, despite there being video footage of it) and urged the media to do their jobs and hold the powerful accountable.

“This instinct to humiliate, when it’s modelled by someone in the public platform, by someone powerful, it filters down into everybody’s life, because it kind of gives permission for other people to do the same thing. Disrespect invites disrespect. Violence incites violence. And when the powerful use their position to bully others, we all lose,” she said.

What I loved about Meryl Streep’s speech is that she went “full mom” on Trump. Forget her status as acting royalty in Hollywood, forget her 3 Academy Award wins and 11 nominations, forget how stellar of an actress she is.

Her speech last night was the speech of an outraged, concerned, baffled, exasperated suburban mom who has raised four kids and is frankly disgusted by what she’s seeing.

All three of these women didn’t deliver intelligent and eloquent speeches by accident. Ellis graduated from Brown University; Viola Davis from Julliard School, and Meryl Streep went to Vassar College and has a degree from Yale University. Female intelligence was on full display last night and it sparkled more brightly than all the dresses combined on that red carpet.

I know that Hollywood being Hollywood everything will effortlessly go back to the pursuit of beauty and the glorification of youth and wrinkle-free skin by tomorrow, but for a moment last night, just for a brief moment, I felt that we had permission to celebrate aging and the wisdom, intelligence and self-acceptance that comes with it.

Not only were these three older women not invisible, they were literally the only thing most of us saw in that room last night.