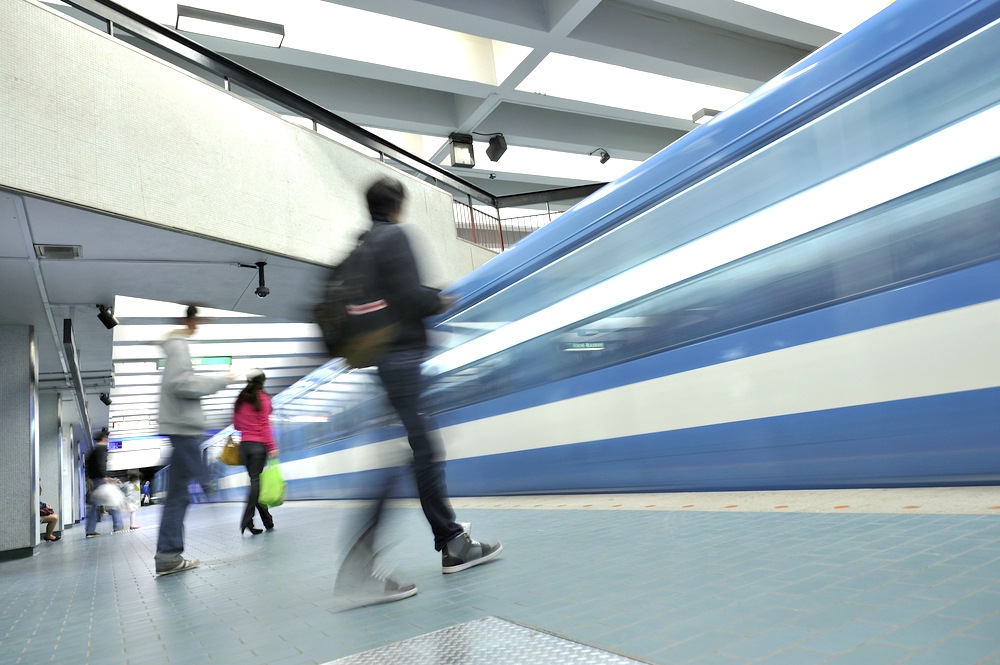 I’m going to go ahead and say something that I know isn’t all that popular a statement with some of you. I really (I mean, really) love Montreal’s metro system.

I used to be a bone fide car addict. Living off Island for a number of years (don’t hold it against me) and driving into work almost proved to be the death of me. When the company I worked for at the time decided to transfer their offices to Dorval and I had to commute for an hour (sometimes 90 minutes when rush-hour traffic was horrendous) that’s when I knew I had had enough. My stress levels and agitation were at an all-time high. I knew I was headed for a burnout and my daily commute had a lot to do with it. I decided then and there that moving back into the city would save my sanity.

I purchased a condo in St. Henri five years ago, but was still not ready to get rid of my car. I made sure to purchase an indoor parking spot and kept taking Golf Lundgren (my nickname for my aging blue VW (don’t hate me for that cheesy Rocky-inspired word-play either) everywhere.

My reliance on my car was so bad that, even with Place Saint-Henri metro station only four blocks away from me, I would routinely commute downtown or to the Plateau and drive around in circles frustratingly looking for that elusive parking spot, paying those stupid parking fees and more often than not ending up with stupid parking tickets. The entire thing was stupid and most of all I was stupid for not taking advantage of our perfectly good public transportation system so I could continue to indulge my driving addiction and my need for what I perceived to be convenience.

There is nothing convenient about living in the city and driving a car. When you factor in car registration, insurance, towing (it happens to the best of us), parking tickets (“Regrets… I’ve had a few”…), garage repairs (the older the car, the more frequent the trips), constant parking fees, and the constant search for parking in a city that currently has an orange cone infestation it is gloriously cheaper and much more uncomplicated to use public transportation.

I got rid of my car a little over a year ago (considering I live near the Turcot Interchange, it was the best move of my life) and hesitantly – almost apprehensively – went back to using the metro. I hadn’t been in it in years, probably a few times here and there, but most definitely not in any consistent fashion since my university days (and it’s been a while since I hung out at Reggie’s Pub).

The very first thing that astonished me? How quickly I would get to everything! For the first few months, I would routinely get to my meetings embarrassingly early because I was so used to factoring in all this time to drive to my destination and look for parking.

Then I started remembering why I loved taking the metro as a student; the reading. As a voracious reader, I now had all this time to catch up on my books while someone else was taking me to where I needed to be. Also, as a writer, there is nothing better than people-watching and the metro is a veritable showroom for human behaviour of all spectrums – the odd, the creepy, the beautiful, and the sublime.

Another thing that was a pleasant surprise was how efficient, clean, safe, and well-run the metro was, and how polite and helpful most STM employees were to me. Turned off by all the horror stories I had heard all these years I was worried that I’d be entering some uncivilized subterranean hell-hole where disgruntled public workers who hadn’t seen light in years would be waving me away. Not what I found at all.

Sure, I know that some are rude and unaccommodating, but so what? Every profession has those folks, but they are not the rule.

Yes, our metro is not always reliable and not always clean and STM employees are not always sociable and sometimes you’re running super late and that’s when the Orange Line decides to stop working for 20 minutes and the indiscernible voice on the speakers could be saying something in Urdu for all we know, and occasionally we have to deal with metro cops lining up – seven at a time – at a metro exit, all pomp and circumstance like they’re goddamn working Checkpoint Charlie (Google it, younger readers) and not just checking if some poor sap decided to take a free ride, but for our money it’s honestly still the best deal in town if you need to get around.

And with those awesome and modern breezy-in-the-summer Azur cars coming in larger numbers soon and plans to make stations more accessible to people with disabilities, it’s only going to get better.

And to think it almost didn’t even get built. When the Montreal Transportation Commission unveiled the proposal in 1953, city officials at the time decided against it.

Thank God smarter and visionary heads prevailed and here we are now celebrating this thing of engineering beauty that has saved my sanity, improved my life, and continues to pleasantly surprise me with its beauty (if you’re paying more attention to the newspapers piling up on the floor, instead of the gorgeous art on the station walls, we are different people, you and I).

So, happy 50th, Montreal metro! You’re most certainly all right by me and I can’t imagine this city without you.