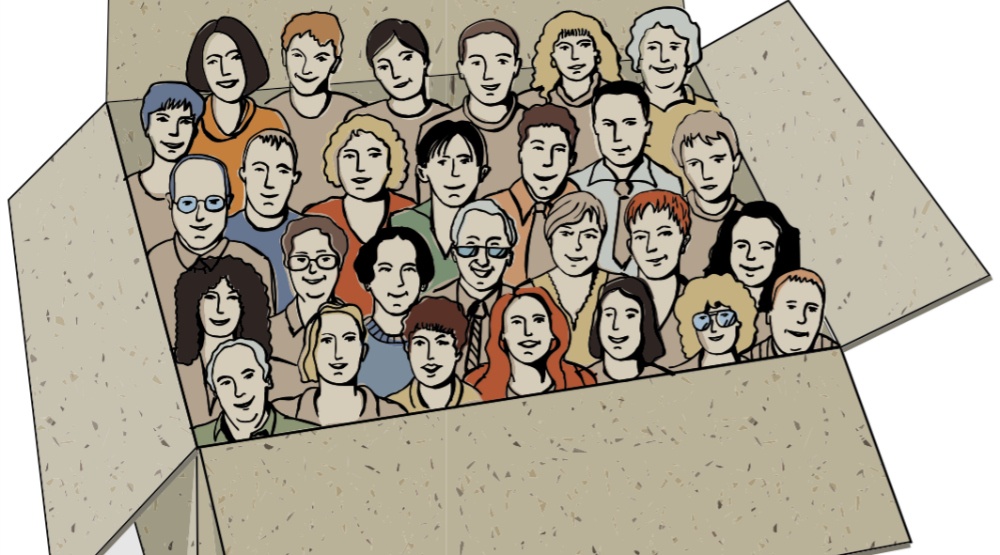 A recent teaser/ad for an upcoming show that’s supposed to help unveil part of the programming next year to celebrate Montreal’s 375th anniversary made quite a few waves yesterday. Not the good kind.

After La Presse columnist Marc Cassivi pointed out that the 45-second spot had absolutely no diversity in it (he rightfully called it “Pleasantville, PQ, avec un degré zéro de diversité”) it was immediately pulled (attempts to find it online took a while) and Gilbert Rozon quickly apologized and promised that a new ad would soon be produced in its place.

To his credit, the former Just for Laughs founder and the man primarily responsible for the organization of Montreal’s 375th anniversary neither shied away from the controversy, nor attempted to minimize or downplay it, which has happened often in the past when a glaring lack of diversity has been pointed out by minorities. *waves to Louis Morissette*

Rozon immediately admitted the error and stated that “criticism of the 45-second spot is 100 per cent fair and it will be redone over the weekend.”

As swift and appropriate as the reaction was to the criticism, however, it’s hard to be hopeful that much will change in Quebec’s media landscape without a complete overhaul behind the scenes. The simple fact is, this wasn’t a fluke or an embarrassing accident. It happens all the time and was the direct result of a status quo behind the scenes that doesn’t seem to want to change quickly enough.

The lack of media diversity in newspapers, magazines, on TV shows, and in movies is merely the symptom and the overall result of lack of diversity behind the scenes where all the decisions are made and all the story angles are produced and decided on.

If the production rooms and the media newsrooms continue to be lily white they will never succeed in representing the multicultural communities they are supposed to be representing.

As an allophone second-generation immigrant of Greek descent whose best friends are from a wide spectrum of ethnic communities, there is absolutely no way I would have looked at that clip without immediately wondering where the visible minorities were. It would have been my immediate reaction. And yet not one person in Eric Salvail’s production room even noticed? Not one said: “Wait a minute… something seems off here”? That says volumes about the lack of diversity in that room.

As Cassivi pointed out, 56 percent of Montreal residents were either born in another country or have a parent who was born in another country. I’m one of those Montrealers and I can rattle off a hundred more of them without even breaking a sweat. Multiculturism is as much a part of my Montreal as the ubiquitous orange cones and construction seem to be these days. It’s my normal. Walking around and hearing French, English, and whatever language happens to be in my vicinity at any given moment (Greek, Arabic, Chinese, Lebanese, Italian, Spanish, etc.) is what I’m used to and expect.

Yet when I look at local TV, look at local newsrooms, check out newspaper bylines, or flip through Quebec magazines I don’t see that diversity reflected back at me. It’s like there are two realities; the one I encounter every day when I walk out the street and the whitewashed reality I see depicted in the media that is either unaware or uninterested in what Montreal in 2016 looks like.

And while those statistics may not necessarily represent the demographics in the rest of Quebec, they certainly represent the numbers in other Canadian metropolitan centres. According to Statistics Canada there are currently close to 7 million foreign-born residents in the country, which translates to roughly 20.6 percent of the population. One out of every five Canadian is a visible minority. Yet not a single one could be found in that teaser for a city whose cultural fabric, economy and very identity has been shaped by immigrants.

What kills me in all of this is the complete lack of maliciousness. There was no ill intent in creating that video clip. It was beautiful and it was fun and it included some pretty awesome Quebecers – but only some of them. It was a clip created by a group of people lost in their own privilege, their own reality, and their own echo chamber. What I’m saying isn’t malicious either; it’s simply the truth.

Because the fact that there was no ill intent does not make this ok! It’s absurd that in a city as diverse as Montreal things like this continue to happen. It displays an appalling tone deafness that is frustrating to see occur over and over again.

If accuracy is important to production and editorial rooms, how in the world is it supposed to be achieved when minorities are constantly underrepresented or not even given a seat at the table?

Media watchdog group Fairness and Accuracy in Reporting (FAIR) conducted a study a few years ago in which it highlighted how media bias creeps into a story. The usual route is not via a biased reporter, but “via a reporter’s choice of sources to check, a failure to hear and report dissenting voices, or always turning to the same ‘experts’ or government officials to interview.”

What the results indicate is that, even if a well-meaning journalist or editor thinks they’re unbiased in their story choices and the way they choose to cover said story, they’re really not. Their reality, their experiences, and their immediate surroundings ultimately inform and influence the story. This is how bias seeps in.

This is how a production room severely lacking in diversity unintentionally created a video that failed miserably to reflect the multicultural face of Montreal.

It’s why cultural and gender diversity continues to be so vital in newsrooms and everywhere (city councils, boardrooms, etc.) decisions are made. You need to be within the system to change the system.

You need to be part of the group of people deciding what is or isn’t important for you to show in order to be able to show all spectrums, all skin tones, all religions, and all genders.

In a post-Trump global world that seems to be reacting uncomfortably (sometimes violently) to rapidly shifting demographics, diversity and representation matter more than ever.

I want the Montreal that I know and love and see every single day to be leading the way towards inclusion; not celebrating only a fraction of who and what we are.