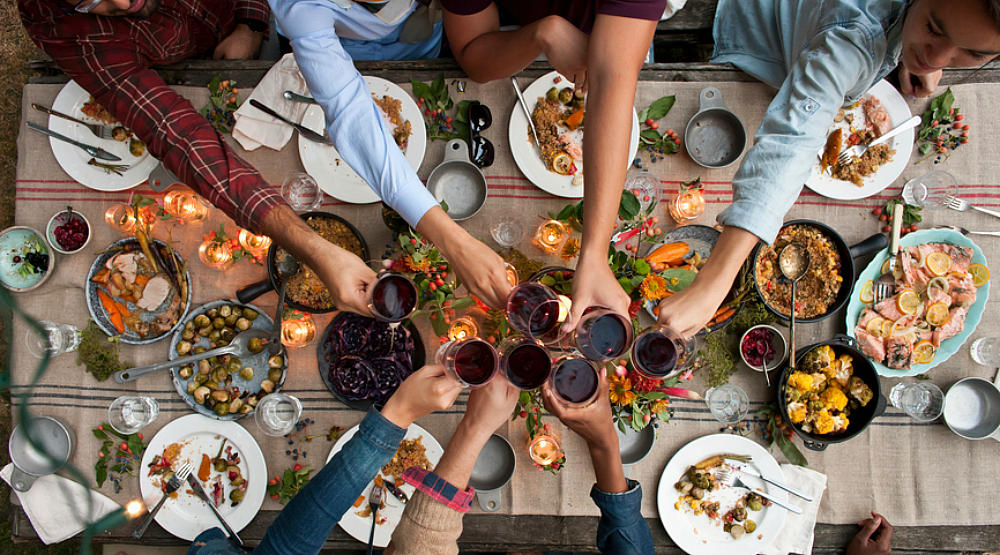 Summer in Montreal never stops. Maybe that’s because we know what’s coming in the winter; nonetheless, between the music festivals, parades, food events, and cultural happenings, there is never a dull moment.

So to help you get even more excited for fun times ahead, we curated a list of 50 things you have to do this summer in our fair city.

What: RibFest is the place to meet Ribbers and taste their fare along with all the fixings of this Texan tradition. Come on down and treat yourself to a delicious culinary experience.
When: June 29 to July 3
Where: Quai de l’horloge, Old Port

What: Although in September, we still had to count one of our favourites on this list! Created in 2009, Montreal Oysterfest continues the great worldwide tradition of celebrating food, drink, the environment, and the humble Oyster. This is truly a party not be missed.
When: September 11
Where: Bonsecours Island, Old Montreal

What: The YUL EAT Festival has grown at an exponential pace and this year, the festival comes back building on its success to satisfy food lovers and to make Montreal a major gastronomic destination. Enjoy a weekend of tasting, learning, and discovery.
Where: Quai de L’Horloge, Vieux-Port de Montreal
When: September 3 to 5

What: Come and discover decadent poutines from macaroni and cheese poutine to duck confit and foie gras poutine! The festival has something for everyone including giant games, kiosks, and live music.
When: June 23 to 26
Where: Clock Tower Quay, Old Montreal

What: Carifiesta will invade the streets of downtown Montreal with their vibrant colors and extravagant costumes while dancing to the musical sounds from throughout the Caribbean. Fun for the whole family!
When: July 2
Where: Phillips Square, Montreal, QC

What: Week-ends du monde provides Montrealers of all origins with a showcase to celebrate and share their traditions through music, dance, and culinary discoveries.
When: July 4 to 12
Where: Parc Jean-Drapeau

What: The largest festival devoted to Haitian culture outside of Haiti! Experience music, dance, art, and food!
When: July 26 to 31
Where: Various venues

What: Every year, the Montreal Highland Games brings together Montrealers of Scottish and all other backgrounds to celebrate Highland games, music, and culture. The Games allow the public to discover the treasures, legends, and history of the Scottish culture.
When: July 31
Where: Parc Arthur-Therrien, Verdun

What: The Polish Festival brings Polish folklore, culture, music, and perogies (of course) to Montreal! On the festival’s stage you’ll be able to enjoy live music, theatre, and plenty of interactive games.
When: August 13 to 14
Where: 2550 Dorion, Montreal

What: 6 km, 16+ obstacles, 10,000-watt after party – Mud Hero Montreal is a mud run at the gorgeous Mont Saint-Bruno overlooking Montreal. Time to get dirty!
When: June 25
Where: Mont Saint-Bruno, Quebec

What: Hosting teams from the United States, Ontario, and the Maritimes, the level of competition will be very high this year! The Montreal dragon boat challenge is the second leg of the triple crown and will be held for the second time. Register and give your strength a go!
When: July 9 and 10
Where: Parc Jean-Drapeau

The Ride to Conquer Cancer

What: The Enbridge Ride to Conquer Cancer is an epic, two-day cycling event spanning over 200 kilometres through breathtaking scenery. During this journey, you will ride throughout Quebec’s countryside and help conquer cancer!
When: July 9 and 10
Where: Various locations

What: This challenging obstacle course for all ages and physical abilities, designed to test your endurance, strength, and quick decision-making skills is back and bigger than ever! Gather your friends and test your true strength!
When: July 16
Where: 40 Chemin du Mont Owls Head, Mansonville

What: If you always wondered what it would feel like to escape prison with 200 other inmates encountering obstacles, guards, and more, well, this might just be your event.
When: August 13 and 14
Where: La Terre des Bisons, Rawdon

What: The Color Run, also known as the Happiest 5k on the Planet, is a unique paint race that celebrates healthiness, happiness, and individuality. Now the single largest event series in the world, The Color Run is not only a blast, but also gives to charity!
When: August 13
Where: F1 Race Track at Parc Jean-Drapeau

What: What is one of the most exciting celebrations in Montreal, the pride parade will feature floats from hundreds of local sports teams, cultural and community groups as well as other gay, lesbian, bisexual, and transgender organizations. Come and support this movement and join a day of unity and love!
When: August 17
Where: Starts at the corner of saint-Mathieu Street

What: Montreal is getting a record-breaking water slide at the Olympic Park! Did we mention it’s the world record? Yeah, it’s that long.
When: August 13
Where: Olympic Park Esplanade

What: The 32nd edition of L’International des Feux Loto-Québec is back lighting up Montreal’s sky with gorgeous fireworks displays by some of the greatest pyrotechnic artists of the world.
When: July 2 to 30
Where: La Ronde, 22 Chemin Macdonald, Île Sainte-Hélène

What: AIM is the only festival in Canada authorized to offer non-stop music for more than 32 hours! On-site activities will also include educational and artistic workshops. The goal is to offer an interactive and captivating experience for everyone featuring art, innovation, and movement.
When: July 15 to 17
Where: Parc Carillon

What: Ranked as the world’s largest jazz festival by Guinness World Records, the festival hosts some 30 countries, 3,000 musicians, and 1,000 concerts in 15 concert halls and 8 outdoor stages from noon to midnight daily.
When: June 29 to July 9
Where: Various locations

What: The weekly music festival is back throughout the month at Parc Jean Drapeau. Artists this month include Josh Wink, Erik Faulkner, Ruls, Roux Soundsystem, Zepha, and Wolf + Lamb. The $11.50 is worth it.
When: Until October 22
Where: Parc Jean-Drapeau, 1 Circuit Gilles Villeneuve, Montreal

What: The MEG Montréal Festival showcases contemporary music trends ranging from indie rock to electronic music. Artists from all across Canada, France, and other parts of the world gather for the MEG to bring notice to the indie music scene and spotlight to Montreal as a worldly music hub.
When: July 21 to 31
Where: Various venues

What: The Osheaga Music and Arts Festival will be taking over the city once again from July 29 to July 31 marks the 11-year anniversary of the three-day long indie music festival, and as usual, this year is promised to be better than the last.
When: July 29 to 31
Where: Parc Jean-Drapeau

What: Get ready for some serious head0banging and mosh-pit action at this heavy metal outdoor festival1
When: August 6 to 7
Where: Plaine des Jeux, Parc Jean-Drapeau

What: The ÎLESONIQ music festival’s reputation continues to grow by leaps and bounds every year. It is the only electronic music focused festival in Montreal and features headliners such as Skrillex, Zeds Dead, and many more stars of the EDM scene.
When: August 5 and 6
Where: Parc Jean-Drapeau

What: FestiBlues takes place in August over a span of four days, celebrating this year its seventeenth edition. It offers blues programming and related music featuring over fifty artists from national and international sources.
When: August 6 to 9
Where: Parc Ahuntsic

What: The largest outdoor reggae festival in Canada. The festival attracts over 20,000 people over the weekend festivities, featuring music, dance, and food!
When: August 26 to 28
Where: Old Port of Montreal, 33 Rue de la Commune O

What: A three-day music festival featuring renowned and upcoming country artists. The even features various musical acts on an outdoor stage and under the big top to close the evenings off. Get your cowboy boots ready!
When: August 19 to 21
Where: Quai de l’Horloge

What: Get ready to partake with 80,000 other people at this free EDM music festival taking over downtown Montreal!
When: September 9 to 10
Where: Rue Crescent, Centre Ville de Montreal

Arts around the city

What: The OUMF Festival is made of five components that promote the art culture in Montreal including visual arts, cinema, literature, knowledge, and music. Join this free festival and get immersed in our city’s creativity!
When: September 7 to 10
Where: Quartier des Spectacles

What: Over 250 world-renowned tattoo artists will gather downtown Montreal as part of the 14th edition of Art Tattoo Montreal. And yes, you can get tattooed on the spot.
When: September 9 to 11
Where: Place Bonaventure, 800, De La Gauchetière St.

What: Tangueros of all levels from Montreal and abroad, music lovers, and the general public will gather for the annual festivities celebrating the Argentine tango! Musicians and dancers will be on hand to offer the best of their art for six consecutive days.
When: August 9 to 14
Where: Various locations

What: Come and experience the great celebration of Hot Air Balloons and enjoy family activities, performing arts, and more!
When: August 13 to 21
Where: Aéroport municipal, Saint-Jean-sur-Richelieu

What: Every year, many well-known Canadian designers, retailers, and international fashion icons will share their art and vision with the public at the festival. The activities include fashion shows, live creative sessions, design showcasing, and musical performances.
When: August 15 to 20
Where: Various locations

What: Come and check out over 110 artists in visual arts and crafts at what is the greatest open air art gallery in eastern Canada.
When: June 29 to July 3
Where: Starts at Berri-UQAM station

What: Just for Laughs is back for another year of laughter-filled antics. Taking over the city from July 13th until August 1st, this year promises to be better than the last.
When: July 13 to August 1
Where: Various locations

What: A festival celebrating the street culture featuring graffiti, break dancing, emceeing, dj’ing, and skateboarding.
When: August 10 to 15
Where: Promenade Wellington, Montreal

What: Come and discover films from more than 80 countries!
When: August 27 to September 7
Where: Various locations