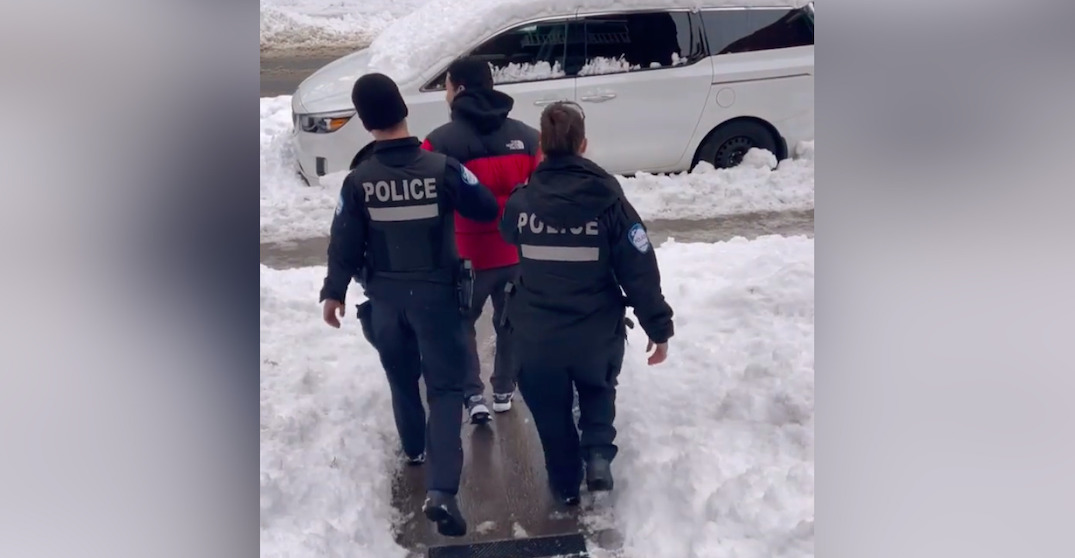 Montreal police have responded to and are investigating an incident in which they’ve been accused of racial profiling.

The incident was caught on camera in Vileray and shared across Instagram on Sunday evening. In the video, the alleged suspect, Andy Basora, is grabbed by a maskless police officer on the steps to his home for apparently stealing a red North Face coat.

“Imagine being pulled over on your own property for wearing a red North Face coat?” said Basora’s social media post. He thanked everyone for their advice and messages before concluding his caption, saying his lawyer is “taking care of the situation.”

In a phone call with Daily Hive, Basora’s lawyer, Fernando Belton, said he asks the question he frequently circles back to when cases are regarding race.

“What was the real intent of the police stopping my client? If he was white, would he be getting the same treatment?”

Belton says he believes the case is an example of racial profiling.

“It’s at his house; he’s almost entering his home. When the police officer grabs him, there’s no other reason besides that his coat looked similar to a robbery that took place over a month ago. North Face coats are very common. How many people do you know who wear one?” he said.

According to the SPVM, the two police officers in the video are the same who were on sight during the December robbery.

Belton said Basora wasn’t arrested, but was detained and questioned. He says they will be filing a complaint with Montreal’s police ethics committee.

In its Twitter thread, the SPVM also acknowledged that one of its officers wasn’t wearing a mask, saying that some situations require “quick and immediate” attention and putting on face masks is “not always possible.”

Montreal police say an internal investigation regarding the incident is currently underway.

Daily Hive reached out to the SPVM for additional comment but has yet to hear back.