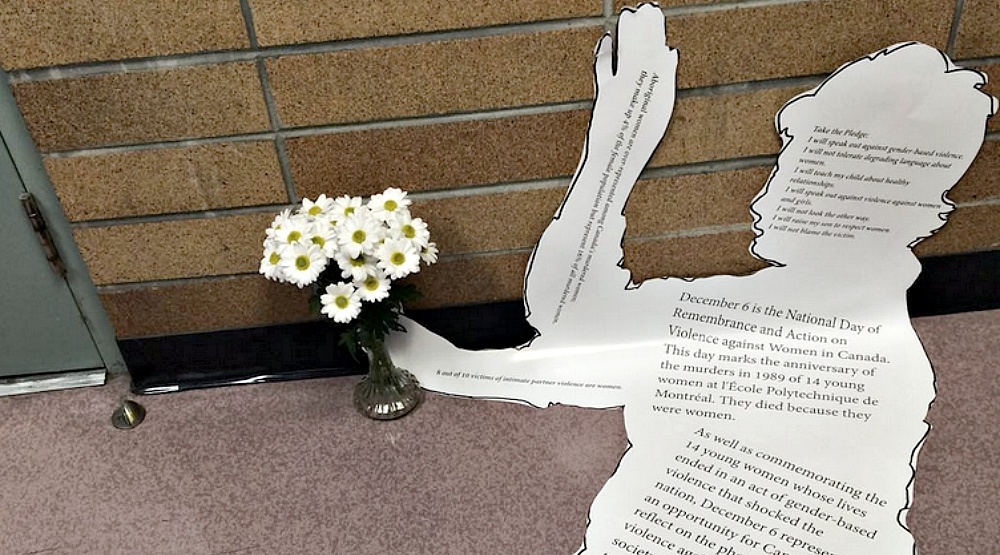 Twenty seven years later, December 6 continues to be a solemn day in this city; a day of solitary reflection and collective mourning, a commemoration of so many innocent lives lost and a public affirmation by many to continue to make things better.

Twenty seven years later I still think of who these young women were and of everything they weren’t allowed to become.

“I can’t believe it’s already been 27 years since this happened,” my friend, the mother of a young daughter herself, told me this morning. I can hardly believe it myself. The years go by faster as you get older, and the anniversaries roll around relentlessly quicker and quicker.

Another December comes around and you realize you just experienced one more year these women didn’t have. It’s a sobering thought, and a humbling one, as well. One weighed down with responsibility, with the notion that if you just say one thing, do one thing, make something just a little bit better, explain something just a little more clearly, you might avoid such a tragedy in the future. Someone else’s life and future might just unfold as it was supposed to.

Numerous theories and explanations have been thrown around over the years about Marc Lépine’s motives. He was deranged, lonely, and angry. He had a terrible childhood. He was neglected and abused. None of those theories are necessarily wrong, but they are incomplete. He was also a man who unleashed his rage on the people who he felt had taken what rightfully belonged to him.

He walked into a room one December day like today 27 years ago, methodically and very purposefully proceeded to separate the men from the women, instructed the men to leave, and then opened fire on the women. In his suicide letter he very clearly blamed women and feminism for ruining his life (since he had been refused entry to the Polytechnique he believed female engineers had taken up space that rightfully belonged to him) and so killing these women felt justified to him.

Despite his very clear motives and explanations, more than a few people still claim to this day not to understand the reasons for the murders. They prefer to see them as random, as the actions of a madman, and not as a hate crime. To acknowledge the Montreal Massacre as a hate crime would mean having to acknowledge pervasive and systemic sexism and misogyny and that is something too many are still unwilling to do.

Even when a prominent physician and mother of three was murdered in cold blood just a few days ago; her body stuffed into a suitcase and dumped by the side of the road, we cringe, sigh, and shake our heads at this unspeakable violence we don’t know how to articulate.

“How did this happen?” we ask, as if this type of extreme violence doesn’t happen to women all the time.

Even when we find out that there’s a Canadian federal judge callously telling a 19-year-old rape victim that she “should have kept her knees together” to prevent her assault, we react in outrage.

“How did this happen?” we ask, as if rape victims aren’t consistently let down by police officers, the judicial system, and the media reporting on them.

Even when the new president-elect south of the border is a man who is on record as proudly boasting about “grabbing women by the pussy”, that still isn’t a deal breaker for American voters.

“How did this happen?” we ask, as if American legislators, busy cooking up laws to regulate women’s reproductive systems, and pretty much every single organized religion, haven’t in a sense already made women’s pussies public property.

For some reason violence (whether physical, sexual, online, or the really, really subtle kind and “why can’t you take a joke, already?”) continues to be minimized, excused, downplayed, and ignored. It’s supposed to be isolated and innocuous, not transferable to real life, not supposed to send any subliminal messages to troubled boys with hate in their heart and in need of easy targets.

Every six days a Canadian woman dies at the hands of her partner, yet we continue to pretend that gender-based violence is somehow still a rarity in this country, a sad isolated tragedy on the front pages of a paper.

On any given night in Canada, 3,491 women and their 2,724 children sleep in shelters because it isn’t safe at home. Half of all Canadian women report having experienced at least one incident of physical or sexual violence since the age of 16. The vast majority of online harassment and cyberbullying has as targets women and the perpetrators are men who feel women (just like Lépine once did) are now taking up too much space.

On Dec. 6, 1989, Marc Lépine walked into a classroom at Montreal’s École Polytechnique and opened fire. Twenty seven years later we still remember them and think of how best to honour them.

Feminist Andrea Dworkin said: “It is incumbent upon each of us to be the woman that Marc Lépine wanted to kill. We must live with this honour, this courage. We must drive out fear. We must hold on. We must create. We must resist.”