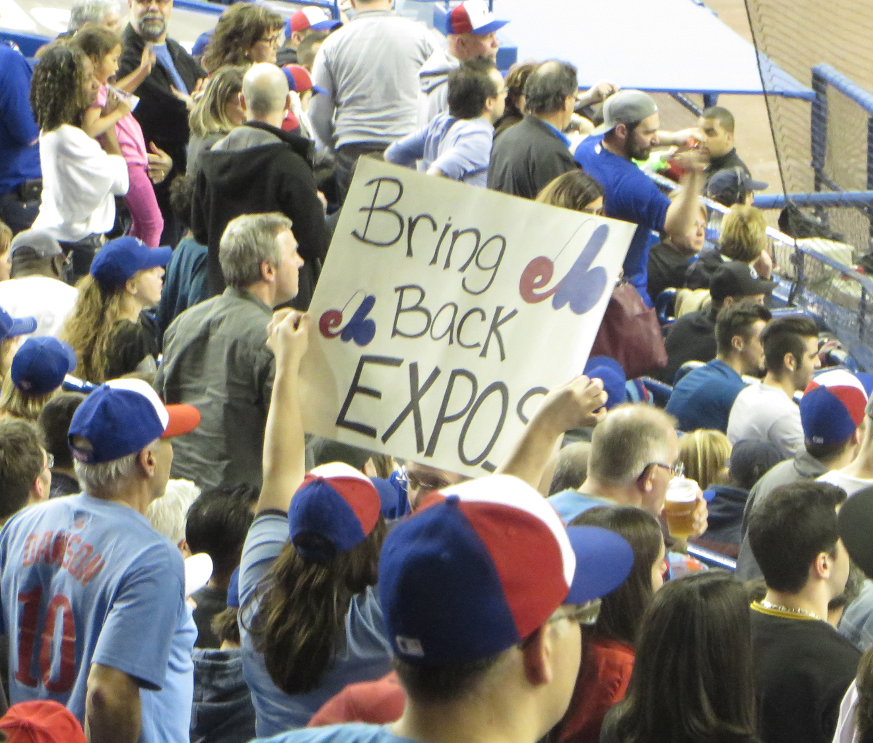 It has been almost 12 years since the last Expos game in Montreal. Montreal lost 9-1 to the Florida Marlins that night, as 31,395 fans said goodbye to the Expos forever.

Montreal’s Major League Baseball team has lived on through its fans and their desire to return.

With vocal support from groups all over the city such as Expos Nation, the Montreal Baseball project, and even hints from the MLB themselves, a return seems imminent. With a ready and hungry fan-base, what’s stopping the MLB from returning to Montreal?

Let’s start with the stadium.

Currently sitting at the corner of Sherbrooke and Pie-IX is the Olympic Stadium, which was of course built for the Summer Olympics in 1976. It was the home of the Expos up until their final game at the end of the 2004 season. The stadium has been plagued by the deterioration of the roof, the most famous incident being when the roof collapsed in 1999, letting snow inside.

In short, it was not a place that Montrealers liked to go.

“Montreal [is] a city that loves to be out, and the biggest mistake they made was putting a roof over that stadium,” said Expos Nation Ambassador, Annakin Slayd. “I don’t think we’d have a problem filling a stadium, especially if it’s downtown.”

Located in the eastern part of the city, Olympic Stadium stands high above a residential area. Despite being next to a metro station, it is still a ways away from the nightlife in downtown Montreal.

Of course building a new stadium is no easy task. Where would it be built, and who would be paying for it?

According to Chairman and Founder of ExposNation Matthew Ross, an area oft-mentioned when it comes to a new stadium is the Peel Basin, in Griffintown.

“People in Montreal know the summers are short so it’s got to be outside, so we start with basic things like that and already your audience willing to go to games is much higher,” said Ross.

According to a feasibility study published in 2013 by the Montreal Baseball Project in collaboration with Ernst & Young and the Board of Trade of Metropolitan Montreal, a new stadium would cost about $426 million. They also recommended a park with no roof, and that it would ideally seat 36,000 spectators. A retractable roof option would cost an additional $150-$180 million.

The same study identified the Peel Basin as an ideal location for stadium.

It is also no secret that Montreal’s mayor, Denis Coderre, is a big fan of the idea of getting the Expos back to the city. Slayd believes that Coderre can be a representative for the team and potential stadium in the political setting.

A stadium cannot be empty of course. Leading up to their departure to Washington in 2005, decisions by Expos ownership and management groups caused attendance to drop significantly in the late 90s and early 2000s.

In 1997, the Expos traded Cy Young Award winner, Pedro Martinez, to the Boston Red Sox. In addition to this deal, a lot of stars were let go after having the best record in 1994.

“One way or another we’re going to make money this year,” Claude Brochu, the Expos then President said in 1995. “The solution for us is simple. We can’t have too many high-priced players.”

Slowly but surely, attendance would drop throughout the years.

“People started to lose faith and they didn’t want to be betrayed by their ownership groups anymore,” Slayd said.

If the Expos were to come back, it would require a significant push from the fans in the Montreal. With the last census reporting just over 4 million people, Montreal is the largest North American city without a baseball team. Plus, the demand is there.

Since 2014, the Toronto Blue Jays have played two exhibition games per season at Olympic Stadium; in 2014 against the New York Mets, the Cincinnati Reds in 2015, and the Boston Red Sox in 2016. Since the first year, ticket sales have seen growth year over year, reaching over 100,000 this year.

“The first year was sort of an experiment and now we’re kind of at the point where it’s pretty much accepted view that Montreal is a top candidate to get a team back whenever MLB decides to expand or relocate a team,” said Slayd. “There’s no question that those games have been a tremendous success.”

Time to head back to the ballpark for another great afternoon with my @Montreal_Expos baseball family pic.twitter.com/Ikh5j8tAoQ

How the team will get back to Montreal is a different issue.

With the Tampa Bay Rays and the Oakland Athletics both having their respective issues regarding their stadiums and attendance, many in the baseball world have looked at relocation. However MLB has been reluctant to relocate teams, the most recent actually being the Expos departure in 2004.

Expansion could be the most likely avenue for baseball fans in Montreal to get a season-long fix. The timeline seems to depend on who you talk to in the city.

Slayd believes that in 3-5 years, a team will return. His colleague Ross believe we’re looking at a 4-6 year timeline.

“It’s a situation that’s very fluid at the moment. The local people working on the file with MLB are in touch with them regularly,” Ross said. “It’s just that it’s not talked about in public, it’s all done behind closed doors and that’s the way that MLB prefers.”

Montreal will be a top candidate for expansion when the time comes. MLB commissioner Robert Manfred said as much in May, and according to Ross, it is not a matter of if the Expos will come, but when.