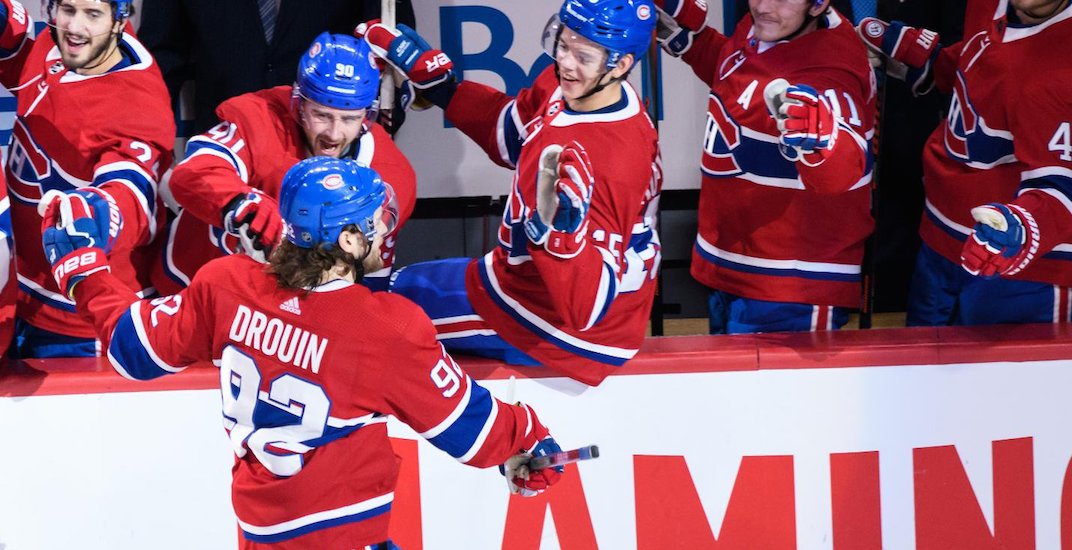 Jonathan Drouin took a sizeable portion of the blame from Montreal Canadiens fans for the team missing the playoffs last year.

Considering the Canadiens missed the postseason by just two points, it wasn’t unfair to point to Drouin’s late-season Harry Houdini impression as one of the primary culprits. He failed to record a point in 16 of his final 18 games, after all.

Up until that point, Drouin had been enjoying the best season of his NHL career thus far with 17 goals and 33 assists for 50 points in 63 games. He still ended up tying his career high with 53 points, but his season-ending slump helped reinforce the perception that many people have of Drouin that he’s an underachiever.

Entering this season, Drouin was much talked about in trade rumours. But through nine games, he’s done his best to silence them.

Drouin needs to re-establish himself as the core player the Canadiens thought they were getting when they dealt Mikhail Sergachev to Tampa Bay to get him in 2017. Having gone from the next Yvan Cournoyer to a whipping boy amongst Habs fans in just two years, no one on the roster entered this season under more scrutiny than Drouin. A good start to the season was going to be imperative for him.

Fortunately, he’s had one. In fact, the 24-year-old has been one of Montreal’s more productive players so far, scoring eight points (3-5-8) in nine games.

That puts Drouin just one back of Brendan Gallagher and Max Domi for the team lead. Drouin’s been consistent so far, too, spreading out his production by hitting the scoresheet in seven of Montreal’s nine games. He has impressed his coach, Claude Julien, who said earlier this month that this was the best hockey he’s seen Drouin play since joining the Canadiens.

Claude Julien on Jonathan Drouin: “He’s playing the best hockey he’s played since he got here. It’s him making (linemates) better, not them making him better.”

Ryan Poehling is playing in the AHL right now because there wasn’t room for him on a crowded roster. During training camp, the Habs were reportedly looking into trading a forward to make room for him, and word was that Drouin was someone they were discussing with other teams.

GM Marc Bergevin dismissed the report, quipping that the rumour was probably started in a “basement in Toronto.”

Marc Bergevin on reports Jonathan Drouin is on the trade block: “I don’t know where they come from. Most of those reports are from somebody in his basement in Toronto, so I don’t pay attention to that to be honest with you.”

Of course, you may remember Bergevin infamously denying that he was shopping P.K. Subban back in 2016, just days before trading Subban to the Nashville Predators for Shea Weber. A general manager will almost never publicly acknowledge any trade discussions being had.

We don’t know how much truth there was to the Drouin rumours, but what we do know is that this is a crucial season for him. While Bergevin may have denied that he was exploring trading Drouin, he did say that he needed to be better.

“He had some good moments, but overall, we need more,” Bergevin said in September.

In the third year of a six-year, $33 million contract, Bergevin and the Habs have a lot riding on Drouin.

As if being a former third overall draft pick didn’t already create lofty enough expectations for Drouin to live up to, since coming to Montreal he’s also had to bear the weight of Habs fans hyping him up as the next great Francophone star of hockey’s most storied franchise.

After scoring just 46 points in 76 games in his first season in Montreal in 2017-18, Drouin’s stock now appears to be on the rise.

All will be well for Drouin in Montreal if he can continue to score at close to a point per game pace. It’s still very early, though, and after last year, the question on Habs fans’ minds is whether Drouin can sustain this type of performance for the entire season.