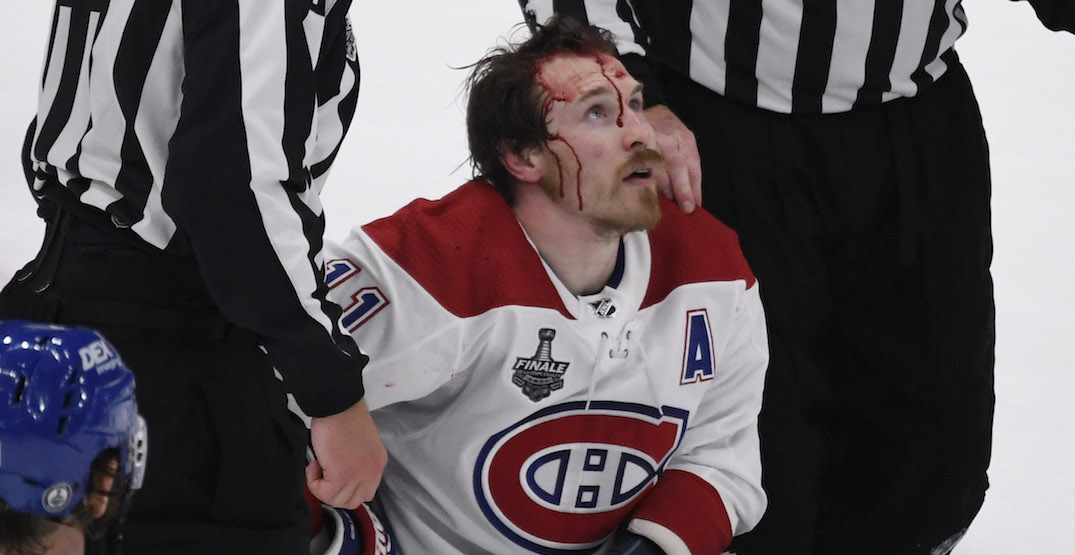 Ah, there’s nothing quite like the good old hockey game.

With the Montreal Canadiens down 4-1 in the third period of last night’s Game 1 of the Stanley Cup Final against the Tampa Bay Lightning, Habs forward Brendan Gallagher was looking to light a fire under his teammates.

Gallagher crashed the crease following a frozen puck from Lightning goalie Andrei Vasilevskiy and started a scrum in front of the net.

Unfortunately for Gallagher, he ended up with his own bodily fluids on his face after being thrown to the ice by Tampa’s Mikhail Sergachev.

The video of the incident is here:

The play sparked various reactions from fans weighing in on the NHL’s latest example of “letting the players play” in a post-whistle scrum. More often than not, scums see infractions go unpunished that would result in a penalty had they occurred seconds earlier.

Here’s some of the Twitter response to the play:

Tampa Bay ALWAYS has a gutless third man in on scrums jumping an unsuspecting player. Greasy.

“Nobody makes me bleed my own blood!”
-Brendan Gallagher, probably.

Sergachev takes down Gallagher who had no helmet. He was defenseless. Head hits the ice first and he's gushing blood all over his face.

Nobody needs a vacation more than Brendan Gallagher pic.twitter.com/uKbGDO91zM

Many spectators were also quick to point out juxtaposing comments from the head of the league about the state of hockey officiating.

Earlier in the day, NHL Gary Bettman commissioner called the league’s officials “the best in the world,” a comment that didn’t sit well with many hockey fans.

Bettman must have been dreaming today. The officiating in the playoffs has been so inconsistent its not funny. I’m a Tampa fan & when Sergachev took Gallagher to the ice that should have been a penalty! Pile drivers are fair game according to Bettman now I guess

The dust-up wasn’t Gallagher’s only altercation of the day, though. In the first period, Gallagher also gave defenceman Victor Hedman a go, despite being a good nine or so inches shorter. It went how you’d expect. Here’s the incident and a few reactions:

Gallagher goes after Hedman then gets manhandled 😂 pic.twitter.com/pGZIWSLdGD

personally i think a gallagher in the net should count as a goal. a goallagher.

Gallagher and the Canadiens will get a shot at redemption in tomorrow night’s Game 2 in Tampa. Puck drop is set for 8 pm ET/5 pm PT.