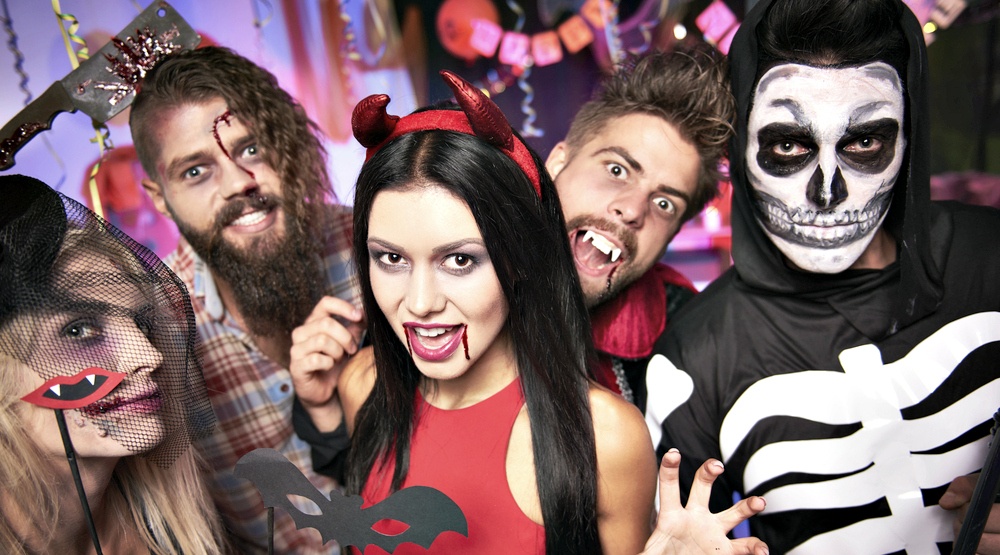 It’s time to do the thriller!

Let’s face it, trick or treating is for kids. As an adult, Halloween is all about partying. So find a costume, head to a club, and make some Halloween memories you’ll never forget!

From club crawls to masked balls, Montreal’s got it all this Halloween. Check out 15 hot parties to attend this Halloween in Montreal.

On October 28th, dress your best, slip on your mask and come experience the Crew Collective like you’ve never seen us before for the Midnight Masquerade. Ever wondered what a masquerade ball beneath 50 foot pillars feels like? You’re about to find out.Bring your mask as they are going full Gatsby for this. The cool part? Prepare yourself for a legendary midnight reveal….
When: October 28, 9 pm
Where: Crew, 360 St-Jacques, Montreal

So this is VERY mysterious as theres no location provided yet but the details seem interesting! Apparently over 10,000 people are attending, there will be 10 bars, and one epic night according to the information. Click here to stay updated on what seems will be the biggest Halloween party yet.
When: October 31
Where: TBD

Monde Ose is at it again, this year with a Halloween theme like no other. The theme of the 2016 Monde Ose Halloween Ball is POP. That’s right, I’m talking about Andy Warhol, Marilyn Monroe, and of course, Campbell’s soup. The event will feature pop art installations, video projections, and burlesque performances. Be sure to dress in your best Marilyn outfit!
When: October 29, 10 pm
Where: St James Theatre, 265 Rue Saint-Jacques

Montreal’s official student Halloween party, the Halloween Howler Club Crawl will take Montreal students through the city for a fun-filled night of club hopping. Through the course of the evening, party-goers will be taken to 4 of the hottest nightclubs in Montreal. Tickets start at $28.75 and include VIP entrance to the clubs (no wait times) and bus transportation.
When: October 29, 7 pm
Where: The crawl begins at Bar Frappe, 3900 Boul Saint Laurent

This Halloween event is Cirque de Boudoir’s most anticipated of the year. Dubbed Montreal’s kinkiest Halloween Party, Black Mass will feature performers, DJs, visual artists, and more. Over 1,200 Montrealers attended Cirque de Boudoir’s 2015 event, so be sure to grab your ticket early.
When: October 29, 9 pm
Where: Paradox Theatre, 5959 Boulevard Monk

For tech trance lovers, this is the Halloween event of the holiday. This late night music event doesn’t even begin until 11:55pm on October 29th, and ends at 10am the next morning. Presented by Monkey Buzinezz presents an extended party with Glasgow-based DJ Mark Sherry. Get ready to party all night long.
When: October 29, 11:55 pm
Where: Circus Afterhours, 917 Rue Sainte Catherine Est

This year, Joverse is hosting a Halloween party Inspired by the hit Netflix series, Stranger Things. The official event page dares Montrealers to “vanish into the small town of Joverse and uncover the mystery.” There will also be supernatural cocktails and some terrifying characters. Be sure to sport your best Eleven costume!
When: October 29, 10 pm
Where: Joverse, 52 Rue Saint Jacques

SAT is the place to be this Halloween. Their massive party will include 9 DJs, two floors of fun, and a special film screening. Tickets are just $25 and can be bought at the door. Stay tuned for more details on the event.
When: TBA
Where: Société des Arts Technologiques, 1201 St-Laurent

This event is one of the cheaper Halloween parties in the city, but that doesn’t mean it’s not just as raging. DJs include Dj Bonanza, DJ Masta, and LaFlame, so be sure to bring your dancing shoes (and your scariest costume). Doors open at 10pm.
When: October 29, 10 pm
Where: Facul T Club, 3556 St-Laurent

Taking place in the Dominion Warehouses, the Incognito Masked Ball is one of the most exclusive Halloween parties in the city. All proceeds will go toward the Montreal Children’s Hospital, and the festivities begin at 9pm sharp. Prepare for a magical night filled with “mystery, dreams, and roses,” and don’t forget your mask!
When: October 28, 9 pm
Where: 433 Saint-Martin

The house of Veuve Clicquot present the signature annual Yelloween Halloween party at L’Auberge Saint-Gabriel in Old Montreal. The quirky and glamorous champagne label hosts similar bashes in cities around the world – from Hong Kong to New York, Vegas to Kuala Lampur. Join us at the private Auberge St-Gabriel in the heart of the old port for this year Montreal’s scariest Halloween party. Tickets are going fast!
When: October 29
Where: L’Auberge Saint-Gabriel, 426, rue St-Gabriel, Montreal

A classic Halloween pub event, Crescent institution, Mad Hatter Pub, will be serving up Halloween-themed drinks all night long. Unlike some of the higher profile clubbing event, there is no entrance free to this Halloween event and there will be plenty of opportunity to win fun prizes.
When: October 29, 7 pm
Where: Mad Hatter Pub, 1220 Rue Crescent

Hosted by Speakeasy Electro Swing Montreal, Spookeasy Halloween will be taking place on Friday, October 28th (one of the few parties taking place on Friday) and will feature a full lineup of “spooktacular” DJs from all over North America. Costumes are encouraged and there will be a photobook set up until 1am.
When: October 28, 9:30 pm
Where: Cabaret Lion d’Or, 1676 Rue Ontario Est

Rave to the Grave

Entering its 5th year in a row, Rave to the Grave will feature 2 stages, 4 headliners, and a whole night of awesome Halloween fun. Headliners include Virtual Riot, Megalodon, and Chuurch, while the event itself will include live painting, haunted projections, and contests and prizes. Note: the theme is zombies so be sure to dress like a creepy dead person!
When: October 29, 9 pm
Where: TBA

Are you a fan of this cult classic? Well whether you are or not, watching The Rocky Horror Picture Show on Halloween is a must. Lucky for you, Montreal does Rocky Horror justice at the annual Rocky Horror Picture Show Halloween Ball. The show takes place at the Imperial Cinema and features a screening of the original movie while a large cast of actors performs live on stage. As per usual, audience participation is actively encouraged. Tickets to this Montreal institution are just $17.95 ($19.95 at the door).
When: October 28, 29, 31 at 8 pm and 11 pm
Where: Cinema Imperial, 1430 Rue Bleury