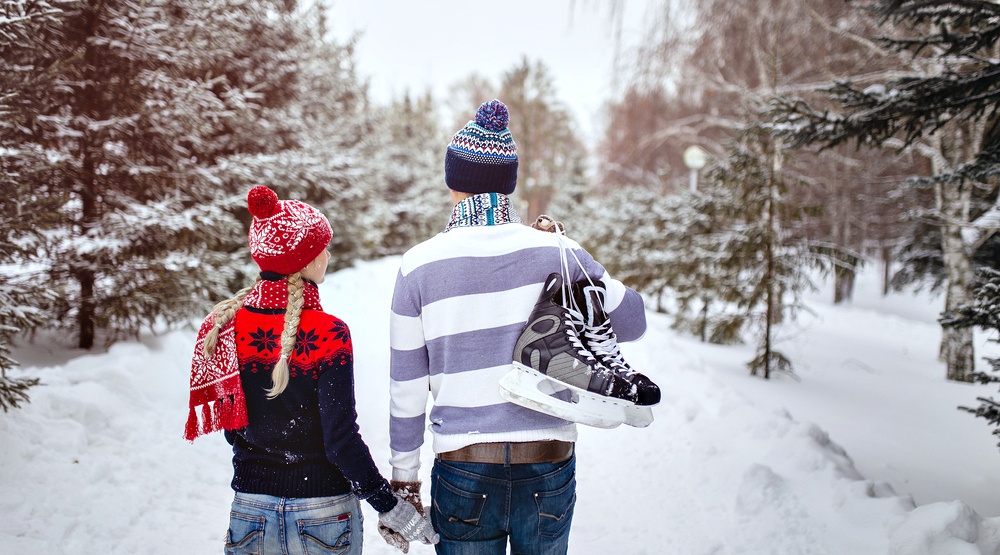 Dating can be expensive. But it doesn’t have to be, especially in a city like Montreal where there are so many free activities at your fingertips.

Even in winter Montreal has got your back, hosting a slew of events and festivals that are free for the public to enjoy.

Whether you’re into adventurous dates or romantic strolls, there is something for every type of couple on this list.

Who says food truck meet-ups are just for summer? Reviving the beloved Food Truck Friday experience is SnowFood Saturdays. Presented as part of Village Mammouth, each saturday between January 28th and March 4th, Montreal food trucks will congregate at Olympic Stadium between 3pm and 10pm. Top top off the delicious street food, there will be live music and international DJs playing tunes every Saturday night.
When: Saturdays between January 28-March 4, 2017, 3-10pm
Where: Olympic Village

Head to the Montreal Museum of Fine Arts

Surprise your date by taking them to our city’s best museum, the Montreal Museum of Fine Arts (you won’t even have to tell them it’s free this holiday season! Thanks to our friends at the MMFA, Montrealers can stroll amongst the museum’s impressive collections free of charge between December 26, 2016 and January 2, 2017. That’s one full week of free entry! Take advantage while you can.
When: December 26-January 2
Where: Montreal Museum of Fine Arts

Embark on a romantic snowshoeing expedition with your date. Right next to the Montreal Botanical Garden and Olympic Stadium lies Parc Maisonneuve. This natural yet urban space is an oasis for snowshoe lovers. Strap on a pair of snowshoes and walk through the 5km of trails in front of you. Parc Maisonneuve has no facility for renting snowshoes so you will need to bring you own.
When: December 2016-March 2017
Where: 4601 Rue Sherbrooke Street East

One of the largest winter festivals in the world, 2017 marks the 18th edition of Montreal En Lumiere. The festival showcases everything that a Montreal wintertime has to offer, from the performing arts to gastronomy to outdoor activities. Spend a romantic night under the lights at Nuit Blanche or check out the festival’s newest addition, Illuminart.

Whether your date is a sports fan or not, you’re guaranteed to have a great time watching this massive game of pond hockey at Parc Jean Drapeau. The first of its kind in Montreal, hundreds of players will be flocking to Olympic Basin to play their hearts out. Cheer on your favourite team while watching a free game of Canada’s national sport.
When: January 28-29, 2017
Where: Parc Jean Drapeau, Olympic Basin

Take your date on a classic winter adventure: tobogganing down one of the city’s many hills. Whether you’re more of a plastic disk, magic carpet, or wooden sled kind of person, there are plenty of places to enjoy an afternoon whizzing down Montreal’s natural slopes. Mount Royal, Parc Lafontaine, and Westmount are great places to go tobogganing this winter. Note: if you have your own sled, this activity is free, and if not Dollarama typically sells magic carpets for as little as $2.
When: Anytime
Where: Various locations

Get active with your date and take them to Montreal’s biggest winter festival, Fete des Neiges. Taking place between January 14th and February 5th, Parc Jean Drapeau will host a myriad of snow-themed events and activities. On this year’s schedule? Everything from evening dance parties to dog sledding. Outdoor activities include snow tubing, cross country skiing, dog sledding, snow archery, an icy pirate ship, a special simulator at the Biosphere, ice skating, ice sculptures, ziplining, a ferris wheel, a Village of Penguins, a Polar Circus, snow scooters, an inflatable bouncy castle, and a mini igloo play area. Though some activities will cost you, many are free. Plus, walking around the grounds on its own is enough of a fun time.
When: January 14-February 5, 2017
Where: Parc Jean Drapeau

McGill’s own Redpath Museum hosts free scientific talks, called “Cutting Edge Lectures,” for the public every month. Though you might worry the science is over your head, it’s presented in such a way that even someone with no scientific background will understand. You and your date are guaranteed to learn a lot and can get cozy in this historic building. Afterwards, you can even take a walk around the dimly lit museum and explore everything from dinosaurs to mummies.
When: January 12, February 9, March 9, April 13
Where: Redpath Museum, 859 Rue Sherbrooke O

Jeanne Mance Park is not only central, it’s also super romantic. One of the city’s more low-key rinks, you and your date will likely have the whole rink to yourself if you’re there on a weeknight. Bring your own skates and the date is free. Though they don’t offer rentals, they do have a small trailer set up so skaters can change into their skates indoors.
When: December-March
Where: Ave du Parc and Avenue du Mont-Royal

Olympic Stadium’s Village Mammouth is the place to be this winter. The festivals boasts an ice skating rink, snow tubing slides, a winter fair, food trucks, live music, and more. Village Mammouth is open all winter long, until March 12, 2017. Admission is completely free, though ice skating or tubing will cost you.
When: December 9-march 12, 2017
Where: Olympic Village

It’s wintertime, meaning hibernating is totally acceptable. Who really wants to walk around outside when it’s -30 degrees anyways? Rather than immediately suggesting the Netflix and chill option, why don’t you suggest an intimate gourmet hot chocolate party of sorts. Grab some top-notch Belgian chocolate, marshmallows, and maybe even a little Bailey’s.
When: Anytime
Where: Anywhere!