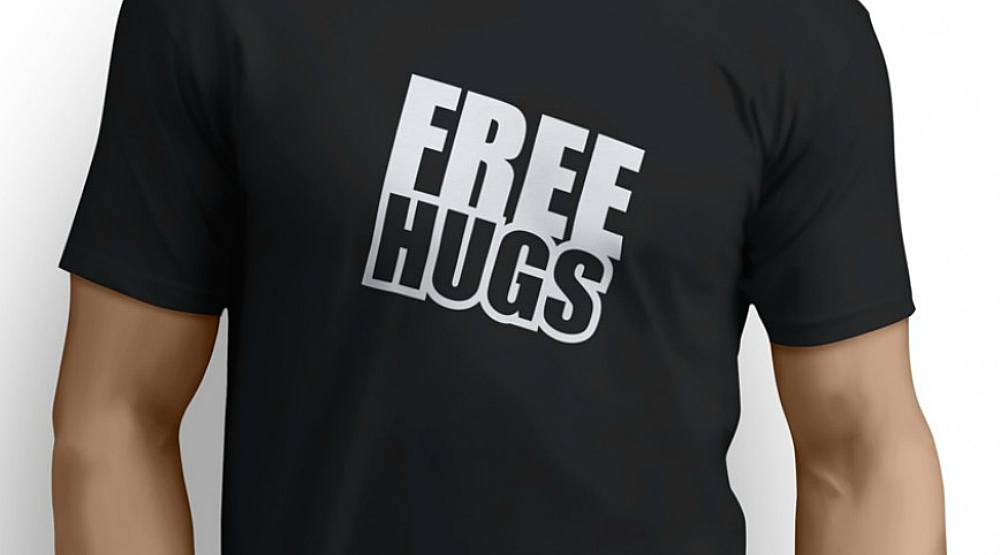 News that a young Montreal resident was slapped with a $110 fine from the Societé de transport (STM) for offering free hugs in the metro quickly spread on social media yesterday.

I’ve seen my share of over-the-top policing by the transit cops over the years. If you’ve ever taken the metro — even on a casual basis – you have no doubt stumbled upon a group of five, six, and even seven metro cops lined up at the turnstiles gearing up to catch someone who hasn’t paid their STM pass with the determination and don’t-mess-with-us ferocity usually reserved for the border patrol working the Durand line between Pakistan and Afghanistan.

I mean, calm down, Officer Sylvain! Best case scenario you’ll bust some hapless teenager who thought they could get a free subway ride, not someone attempting to cross over to another country with 10 pounds of meth stashed in their underwear. There’s really no need for the alpha-male dominant body language.

As local stories go, hearing that someone got fined for handing out free hugs is the “head scratching” kind. Why would anyone care and why in the world would transit police feel justified in handing out a fine for something so innocuous and ultimately kind?

Tommy Boucher’s so-called “crime” was offering a service in the metro without a permit. According to a CTV report, two officers approached him at the Jean-Talon metro and asked him if he had a permit to hand out hugs. When he responded that he didn’t he was fined $110 under STM bylaw R-036, section VIII, subsection II, rule 17 (I didn’t make this part up, although I totally could of and none of you would have been the wiser… who among us has even glanced at the STM bylaws?)

After the ridiculous story spread on social media, providing more than its share of giggling and head-shaking for Montrealers tackling the Monday blues, the STM decided to withdraw the fine and let Boucher off with a warning.

By Monday afternoon the Montreal Gazette had published an editorial asking if “free hugs in the metro are comforting or creepy”, which, while entertaining, was slightly irrelevant, since none of these free hugs are ever forced on anyone and there shouldn’t be anything creepy about something you agree to participate in.

We’re not talking about someone invading someone’s personal space while they’re on their way to work or school on the metro. Some random stranger doesn’t accost any of us and move in with unrequested and or undesired physical contact. This is completely consensual and Boucher (and others who have been seen in and around Montreal metros in the past) always stand with arms outstretched and wait for you to move in.

I think the STM’s reaction was so quickly ridiculed because, despite some of our misgivings to take part in this activity, we still understand its value. It’s absurd and downright sad that an entirely selfless act such as handing out kindness in the shape of a bear hug would be fined and seen as a “service” one needs a permit for. It perhaps reminded some of us that we have come a long way from being a society where random acts of love and support are seen as compassionate and not as a transaction where something is solicited for someone’s gain.

Free Hugs Montreal is just a local branch of a much larger non-profit association, Free Hugs Campaign. Org which was started years ago by an Australian man who was living in London and upon returning home realized he wanted someone to be waiting for him. The movement spread and over the years a number of videos have surfaced around the world of groups of people wearing “Free Hugs” T-shirts or carrying “Free Hugs” signs spreading the love.

Sure, it’s quirky and it’s awkward and the whole thing smells of “Kumbaya” and patchouli, and it’s mostly out-of-the-ordinary in big cities where we’re way too busy weaving our way through human traffic to even make eye contact most days, but it’s nice. It’s really, really nice. And most importantly, it’s needed.

Loneliness and lack of physical and emotional support are some of the most popular complaints in today’s world. More Canadians than ever live alone, and almost one quarter describe themselves as lonely, according to a Globe & Mail article.

Humans simply crave contact and touching. Whether it’s a lover’s kiss, a parent’s hug, a friend’s peck on the cheek, or a colleague’s encouraging pat on the back, we need to be touched and acknowledged. Touch creates better trust between people, decreases violent tendencies and stress, and is even attributed to building a better immune system and reducing depression. It’s no wonder professional cuddling has popped up as a real service for people who crave real touch.

“The STM reiterates that this type of activity must be held outside turnstiles for fluidity and safety reasons,” said spokesperson Philippe Dery.

Honestly… you’re just making yourselves look bad, guys. Just say “we effed up” and move on. If the STM wants to improve fluidity, it can make sure the metro stops breaking down during rush-hour or the escalators aren’t always out of order! A guy offering free hugs isn’t going to break down your perfect system. Just tell him or her to move away from the turnstiles and move on. Over-the-top letter-of-the-law application of current bylaws just makes us all look stuffy and rigid and like we’re absolutely no fun, and that just isn’t Montreal.

We may be a construction-zone nightmare and overspend on gazebos and baseball promotion, but we pride ourselves on being cool and full of “joie de vivre” and we want people who are giving out free hugs to be left alone, dammit. Let us at least have that.