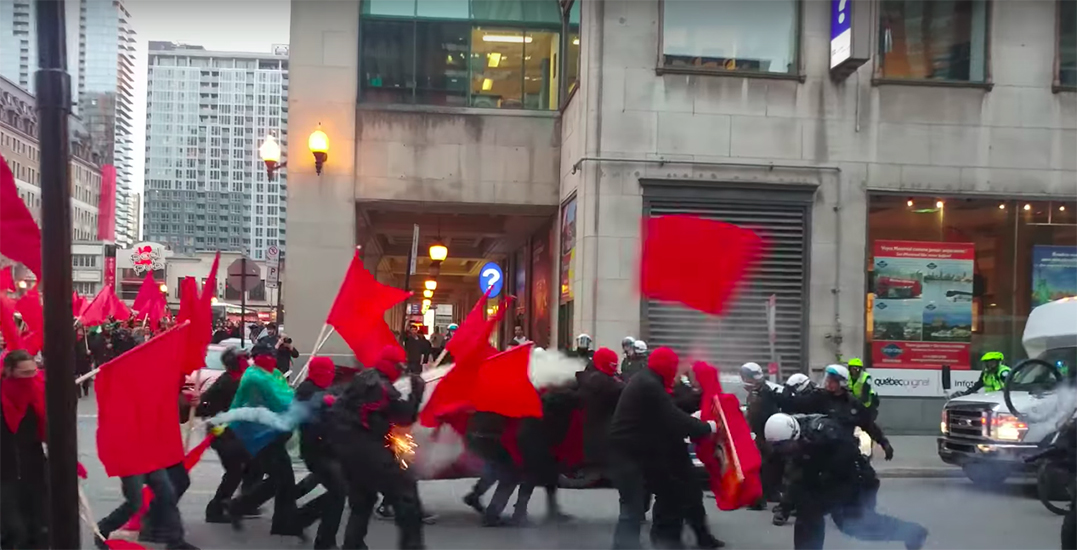 An annual protest has gone awry as Montreal police were forced to intervene with a group of protesters, last night in downtown Montreal.

The anti-capitalist protesters had once again taken to the streets for their annual “May Day” demonstration.

Speeches were given and flags were waved, and in a below video, you can see what looks to be torches held by the protestors.

Police had ordered the protesters via a PA system to refrain from bringing their protest to St. Catherine Street. Upon attempting to turn from Peel Street to Square Dorchester, a number of policemen attempt to blockade the street and redirect them, as seen in the video.

#Manifencours : We asked the small group of protesters to walk on the sidewalks.
^CC

The video, provided by the 4k Guy, then reveals protesters charging at police and several riot officers jumping into the confrontation. It is difficult in the video to see who initiates the conflict, however, firecrackers, tear gas, batons, and protest flags are seen being used as weapons.

The scrum looks to be short-lived as protesters and flag-bearers quickly flee the scene in a cloud of red smoke.

#Manifencours results: mischiefs were commited and projectiles were thrown at the police officers. At least 5 arrests for criminal acts and 1 intervention under a by-law.
^CC

The end of the video shows several protesters being arrested after the conflict. The SPVM confirms that five demonstrators were taken into custody as a result of “criminal acts” and one was stopped due to a violation of a municipal by-law.