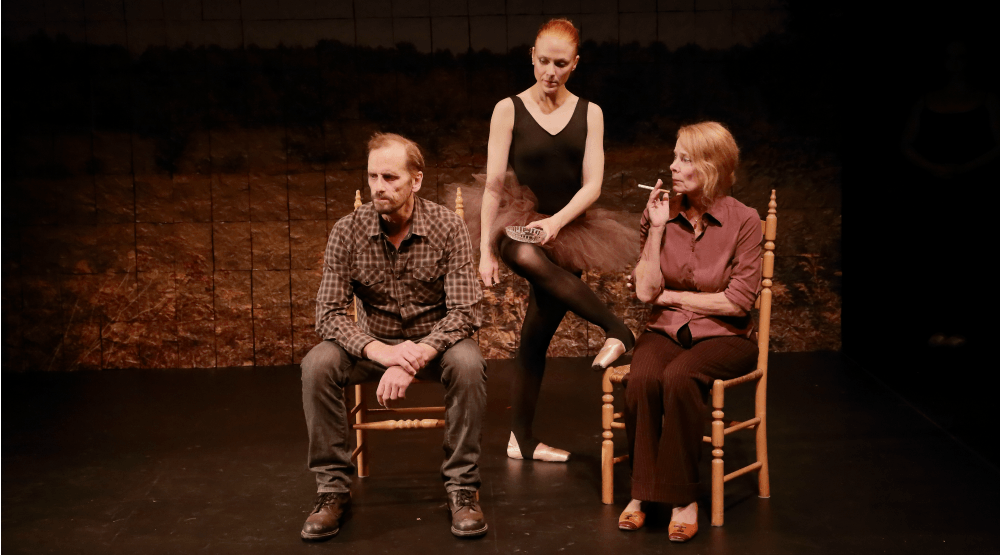 This past Saturday I forced myself to get dressed, leave my house, and make my way out on a truly miserable rainy night to the Centaur Theatre in Old Montreal to catch a play. After a taxing week, all I really wanted to do was stay on my couch and watch something silly and light on Netflix, but play runs are notoriously short in this city and I knew that if I wanted to see this one it was now or never.

I’m glad it was now instead of never because I’m so grateful not to have missed this gem of a piece.

Chlorine is this impossibly tender, laugh-out-loud funny, devastatingly sad, awkward, odd, incredibly interesting, and incredibly real story between Nathan a teenage boy coming of age and his neighbour Sarah who is paralyzed and unable to communicate with anything other than the blinking of her eyes and the help of a word board.

Based on an actual event (and this description is directly from the play bill) the title refers to the bullying incident that led to Sarah’s paralysis: when she was eight, two boys forced her to swallow chlorine. The chemical crystals burned her vocal cords, making her only form of communication the opening and closing of her eyes. A decade later, Sarah’s father catches her former classmate, Nathan, urinating on their lawn and devises a penance of bi-weekly visits with his daughter. As the story unfolds, Nathan’s initial fascination transforms into heartfelt connection.

That synopsis alone is heavy, but being informed that it’s based on a real-life incident that happened in Mascouche in the ‘80s makes it even sadder. You suddenly don’t have the luxury of assuming that this young paralyzed girl who is trapped in her motionless body at an age when young adults are only beginning their lives is only in the playwright’s imagination. This girl existed, her bullies existed, and this terrible outcome was the result of those things coming together.

But, despite the depressing subject matter, the dialogue and the acting make this play light on its feet. Twenty-three year old Augustus Rivers is a revelation as the young, impressionable, often-awkward, occasionally selfish, always sex-obsessed, Nathan Marlin. He talks too quickly and he’s self-assured the way privileged suburban kids often are and he says the wrong things and he’s annoyed by his overprotective mother and Rivers manages to physically embody the vulnerability and the fake bravado that makes teenage boys so endearing, without acting like he’s pretending to be one. That’s not an easy feat – even for an actor who’s young enough to probably remember what it’s like to be a teenager.

Linda Smith as Meredith Campbell (Sarah’s mom) and Brian Wright as Raymond Campbell (Sarah’s dad) provide the much-needed comedy on more than a few occasions, but also strike the right balance of physical and emotional exhaustion, as well as exude that mix of hope and despair that one sees in the eyes of long-term caretakers. Anyone who has cared for an ill or dying loved one will recognize their attempts to put on a brave face and go on about the everyday details of their lives (the ironing, the cooking, the birdhouse making, etc.), even if their lives as they knew them will never be the same again.

There is a quiet tenderness to Meredith’s and Raymond’s relationship that moved me immensely.

And finally, Sarah! Stuck-in-a-chair, unable-to-utter-a-word, occasionally blinking Sarah! How does an actor convey a broad range of emotions and communicate personality and attitude when playing a character whose only form of communication is by opening and closing their eyes?

I suppose one way to do it is by getting Cat Lemieux to play her. The role calls for a larger-than-life persona and Lemieux who is incapable of playing even a small supporting role without completely and effortlessly stealing everyone’s thunder is always such a joy to watch, even when she’s confined to a role where all her acting is limited to the expressions on her face. It’s amazing how much of what you’re feeling you can convey with such limited means. 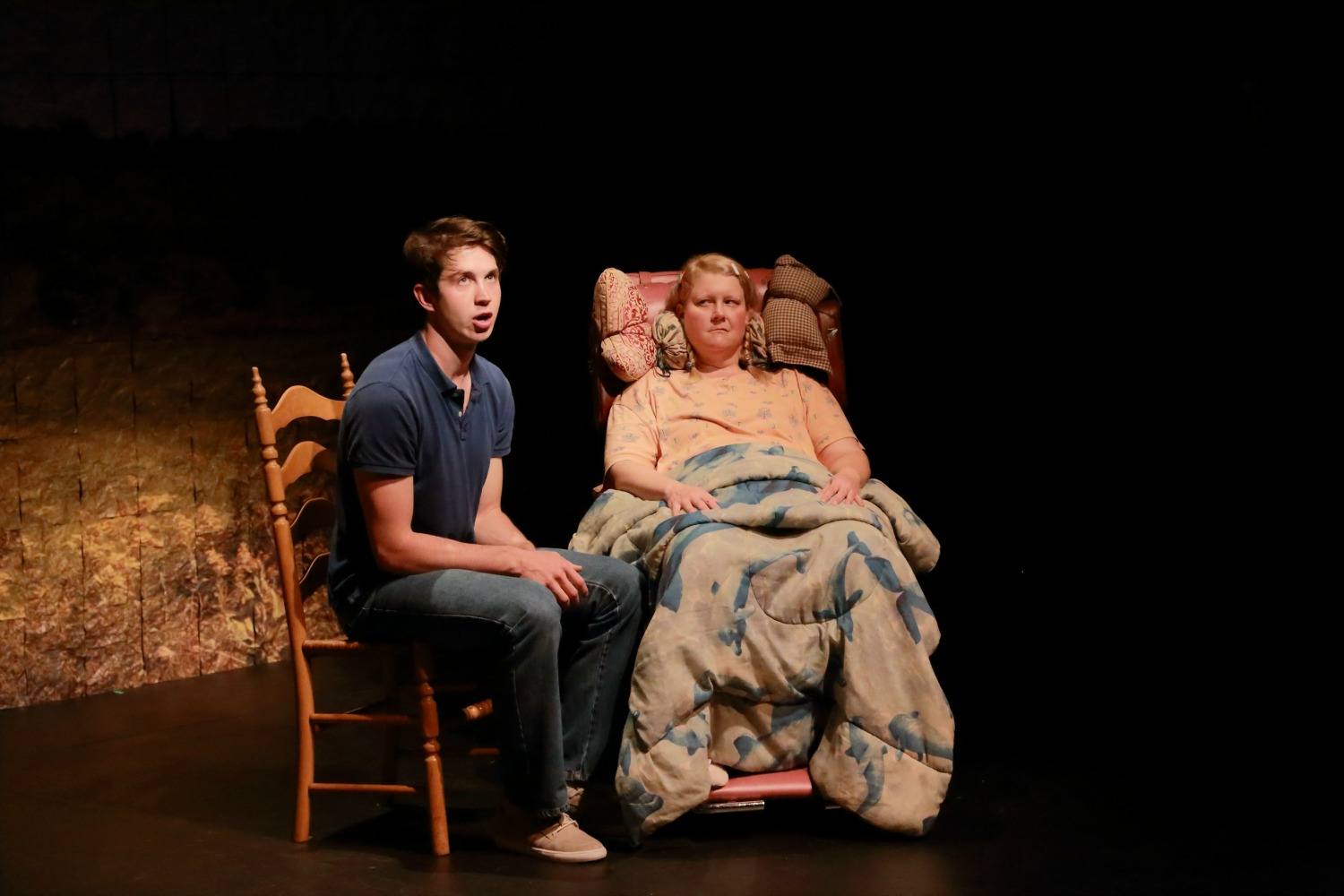 And for those feelings and thoughts you can’t convey with the eyes, Chlorine has employed the ingenious use of ballerinas to express the rest. It may sound odd or forced as a device to use dancers to show Sarah’s interior life, but I assure you it’s one of the most beautiful things I’ve seen in a long time. It somehow works on every possible level – both as a way to transition from scene to scene, and as a way to physically and visually communicate Sarah’s feelings. And the way these three ballerinas dance, pout, and pirouette from scene to scene feels effortless and seamless. It just works.

Yes, there’s nudity, and a scene – given Sarah’s inability to do anything or leave the premises if uncomfortable – which elicited some nervous giggles from behind me and a few gasps from a large man in the front row who probably hadn’t expected to find himself so close to another man’s private parts on a Saturday night.

While there’s the potential for that scene with the brief nudity and another odd strip-poker scene to cross the line and enter disturbing territory they never do. They were written and played with too much genuine love, honesty, and vulnerability for me to be creeped out. All I see are people who are trying to do the best that they can with what they have at the moment. Imperfect, awkward, flawed, good people navigating their way through an imperfect, awkward, flawed, (sometimes) good life.

Originally written and choreographed by Florence Longpré and Nicolas Michon and performed as Chlore to great acclaim at Théâtre La Licorne, Chlorine was translated and directed by actress, playwright, and producer, Johanna Nutter for her company creature/creature’s premiere Montreal production.

It’s to her credit that Nutter’s English translation of Chlorine doesn’t sound like a translation at all, but beautifully uses the intricacies of the English language to communicate what was originally written in French.

And that brings me to my final point. While much of mainstream media in this province likes to go on and on about the “two solitudes” and who knows how much about Marie-Mai or the Tragically Hip, there is a vibrant bilingual scene happening right under our collective noses. An artistic community that not only is inspired by each other’s stories, but recognizes there is beauty in diversity and cultural and linguistic collaboration. A community that celebrates and translates each other’s works and lifts each other up.

As Nutter so eloquently put it, “the bilingual Montrealer is not a mythical beast, but a beautiful creature.”

That’s the world I like living in. It’s not perfect, but few things of true beauty ever are.

This piece only runs until Oct. 29, so don’t wait. It’s very much worth seeing.