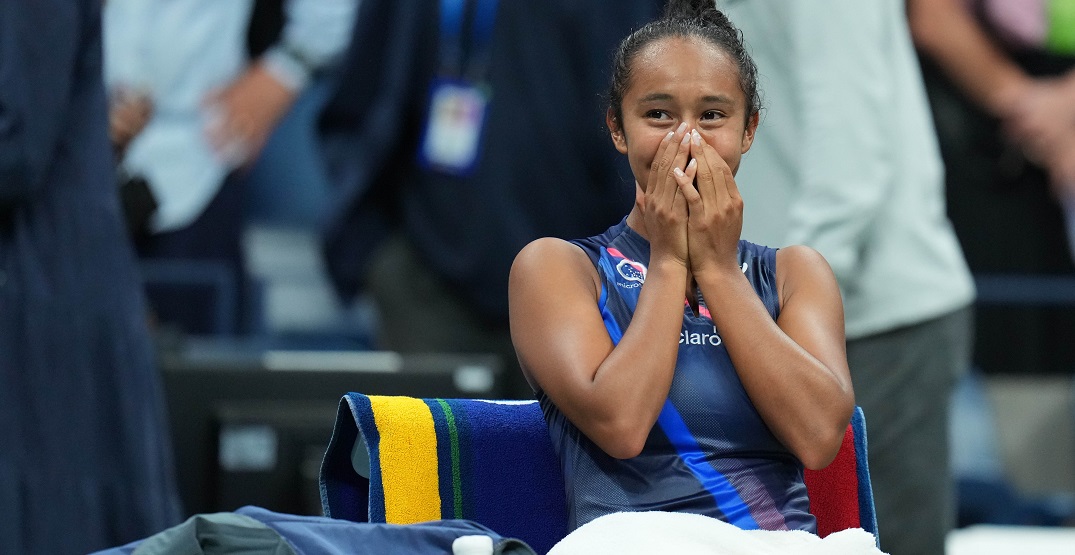 Though Leylah Fernandez didn’t end her US Open run on top, support still came pouring in for the 19-year-old Canadian on Saturday.

It was the most unlikely final matchup you could really imagine. Fernandez entered the tournament 73rd in the WTA rankings, while Raducanu came in ranked 150th.

Took advantage of the travel time today to cheer on @leylahfernandez in the #USOpen Finals. Leylah, you made Canada proud – and we can't wait to see you on the court again. pic.twitter.com/hPp5dtaOz6

The Toronto Raptors and Montreal Canadiens gave Fernandez a shoutout:

And Fernandez even got some royal praise from Prince William and Kate Middleton, as well as Queen Elizabeth II herself.

Huge congratulations @EmmaRaducanu on your stunning performances and historic Grand Slam victory! Incredible –we are all so proud of you. @LeylahFernandez well done on your amazing achievements at this year’s #USOpen, it’s been a pleasure to watch. C

— The Duke and Duchess of Cambridge (@KensingtonRoyal) September 11, 2021

'I have no doubt your outstanding performance, and that of your opponent Leylah Fernandez, will inspire the next generation of tennis players.'

British actor Stephen Fry congratulated both Raducanu and Fernandez for their poise under pressure of the moment.

What a glorious day for two remarkable young women. Yes, it may be ‘only’ sport, but in that ‘only’ there can be found so much of human joy, despair, glory, disappointment, wonder and hope. A brief flicker of light in a dark world. #EmmaRaducanu #LeylahFernandez #USOpenFinal

And former CBC anchor Peter Mansbridge may have summed up Fernandez’s performance best with a simple four-word tweet.

Leylah you were awesome.

Earlier in the tournament, athletes such as Canadian Olympic racewalker Evan Dunfee, as well as basketball stars Steve Nash (who was a frequent fixture in the crowd for Fernandez matches at the US Open) and Magic Johnson had shown their support.

When I grow up I want the composure, confidence and tenacity of Leylah Fernandez. #USOpen

If you haven’t seen the most exciting player at the US Open, 19-year old Leylah Fernandez, you’re truly missing out!! She just beat her 3rd ranked opponent and is on fire 🔥🔥🔥🔥🔥🔥. She’s captivating the world! @leylahfernandez

Hell of a job 20 sets in a row for @EmmaRaducanu

Great fight @leylahfernandez and what a tournament. Lots to be proud of and this is just the beginning! Big congrats to @EmmaRaducanu . Fun to watch 🔥

Well done Emma Raducanu, the first of many duels with Leylah Fernandez. I've no doubt many more majors await for both of you. Another historic moment at the #USOpen – congratulations🚀

Leylah asking for the mic back to acknowledge 9/11 was one of the classiest, most empathetic, and mature things I’ve ever seen in a post game moment ……… and she’s only 19. I’m blown away

Genie Bouchard, who was the first Canadian to make a Grand Slam singles final in 2014 at Wimbledon, also found it “humbling” to say that Fernandez was inspired by her.

I saw that! So humbling to hear her say I inspired her. She’s a great player. Go 🇨🇦 tennis! https://t.co/bZbm1urLz7