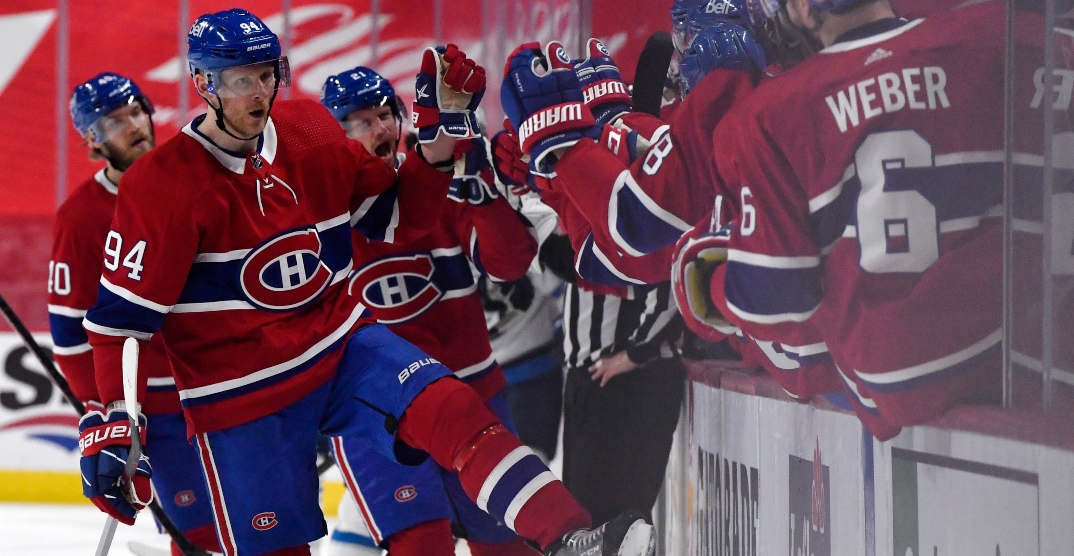 The Montreal Canadiens are one win away from being crowned North Division champions. A 5-1 win over the Winnipeg Jets in Game 3 at Bell Centre on Saturday gave the Canadiens a 3-0 stranglehold on the series.

The Jets gave up a backbreaking shorthanded goal to the Habs for the second straight game. This time it was scored by former Jets forward Joel Armia, who gave Montreal a 3-0 lead in the second period.

Another day, another @CanadiensMTL shorty. 🚨🤯

What a goal for Joel Armia 👏 #ItsOn pic.twitter.com/KAIUPWP6DZ

The Canadiens extended their playoff winning streak to six games and still have not trailed at any point during it. The winning streak is their longest in the playoffs since 1993 — the last time they won the Stanley Cup.

Paul Stastny returned to the Jets lineup after missing the first two games of the series, but it wasn’t enough to spark the team. The Habs came out hot and scored the opening goal for the sixth straight game just under five minutes in thanks to Corey Perry.

The @CanadiensMTL open the scoring in Game 3. #ItsOn pic.twitter.com/q4UR7Z76Wk

Montreal kept pouring it on in the second period, with Artturi Lehkonen’s first of the postseason extending the lead to 2-0 before Armia’s shorty.

Artturi Lehkonen cleans up the mess in front and cashes in. 🤑 #ItsOn pic.twitter.com/tsXize8Zsf

Winnipeg was able to get on the board late in the second when Adam Lowry buried a sweet feed from Mathieu Perreault.

Mathieu Perreault ➡️ Adam Lowry and the @NHLJets are on the board! #ItsOn pic.twitter.com/0XrbxesPkM

Still, the Canadiens led 3-1 through two periods and held a 25-13 edge in shots as the Jets just simply did not play with the sense of urgency that was required for what was essentially a must-win game for them. Only four teams in NHL history have ever come back to win a series they trailed 3-0.

The Habs added on in the third, with Nick Suzuki putting home a pass from Cole Caufield on the power play.

With the Jets on a power play late in the third and Connor Hellebuyck on the bench for an extra attacker, Armia buried his second shorthanded goal of the night to make it 5-1. Armia and Suzuki are now tied with Jesperi Kotkaniemi for the team lead in goals in these playoffs with four each.

It wasn’t all good news for Montreal, though. The team announced at the start of the third period that defenceman Jeff Petry was done for the night due to an upper-body injury.

Game 4 goes Monday at 8 pm ET at Bell Centre in Montreal. The Habs will look to complete the sweep and avoid having to make a trip back to Winnipeg for a Game 5.