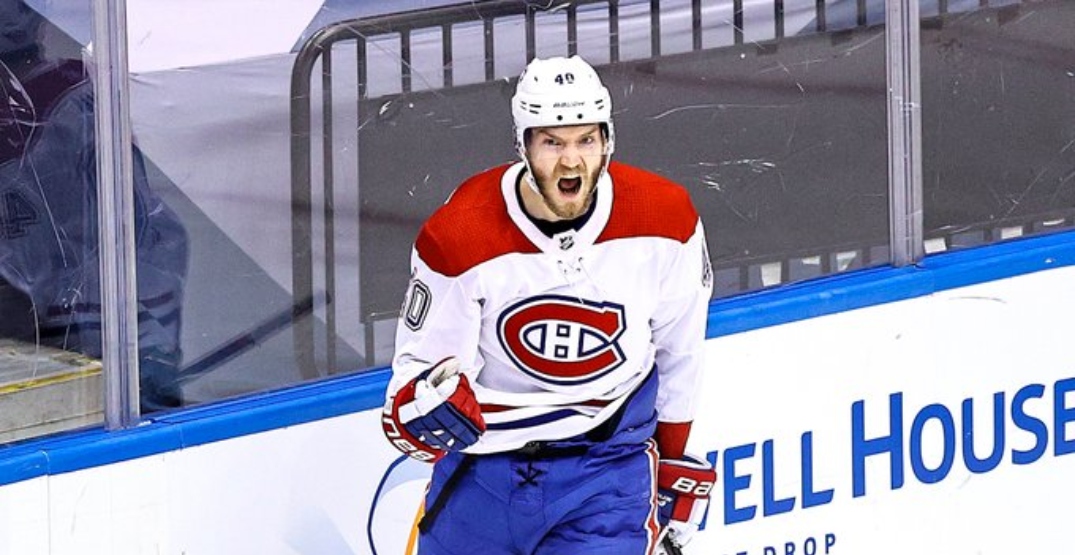 The Montreal Canadiens’ offence finally showed up just in time to save their season, at least for now.

Their 5-3 win over the Philadelphia Flyers on Wednesday staved off elimination and forced a Game 6.

Nick Suzuki scored the game-winning goal with just over nine minutes to go off a great pass by Jonathan Drouin.

AND THE @CanadiensMTL TAKE THAT LEAD RIGHT BACK! 🚨#NHLonSN pic.twitter.com/PxWgTPJnWT

Early on in the game with the Flyers on a power play, a dump in by Xavier Ouellet took a friendly bounce off the boards and came right out in front of Philadelphia’s net, where Joel Armia buried his second goal of the postseason.

They are off to a good start. #StanleyCup pic.twitter.com/UPd24Ka6w9

After getting shut out in Games 3 and 4, Armia snapped Montreal’s goalless drought at 132:18.

That was a big early goal for the Canadiens, both to get the monkey off their back and because the team that scored first had won each of their first eight games of the playoffs.

Later in the period, the Flyers had a shorthanded opportunity of their own in the form of a Kevin Hayes breakaway, but Carey Price came up huge.

What a save, Carey Price! 😳#StanleyCup | #GoHabsGo pic.twitter.com/Vgtu83Uevq

Just 1:45 into the second period, Jesperi Kotkaniemi received a five-minute boarding major and a game misconduct for this hit on Travis Sanheim.

Kotkaniemi gets a major penalty and game misconduct for boarding Sanheim pic.twitter.com/Tjg4m73cOL

Only 50 seconds into the five-minute power play, Jakub Voracek tied the game up on a one-timer.

The Habs were nearly able to kill off the rest of the penalty, but with just eight seconds left in it, Voracek struck again, banking a shot in off Ben Chiarot’s skate.

A little over halfway through the period, Armia tied things back up with his second goal of the night from a tough angle.

Then the Canadiens got a big opportunity of their own on the power play. Philippe Myers cross checked Jake Evans in the face after a whistle, drawing blood and earning a double minor for high sticking.

Just 37 seconds into the power play, Brendan Gallagher showed off some impressive hand-eye coordination to finally score his first goal of the playoffs — on his 37th shot.

This game is CRAZY! 🚨#GoHabsGo BACK on top. #StanleyCup pic.twitter.com/dYGwVIN8E4

After Gallagher had given the Habs the lead back, Suzuki looked like he’d extended it on a weak goal allowed by Carter Hart.

This created somewhat of an awkward situation. Flyers head coach Alain Vigneault looked like he was going to pull Hart, but then challenged that the goal was offside and got it overturned. He then kept Hart in the game.

Despite the disallowed goal, the Habs were still up 3-2 after outshooting the Flyers 11-7 in the middle frame.

A little over halfway through the third period, Jeff Petry took a tripping penalty after hauling Hayes down on a breakaway. The Flyers thought it should have been a penalty shot, but it didn’t take long for them to convert on the power play for the third time in the game as Joel Farabee deflected a hard pass from Voracek by Price.

Just 22 seconds later, Suzuki put the Habs back on top.

Phillip Danault added an empty netter with just 17.7 seconds to go to seal the win for Montreal. The Canadiens outshot the Flyers 12-10 in the third period and 33-29 on the night.

The Flyers still lead the series 3-2, but the Habs win tonight has forced a Game 6 on Friday.