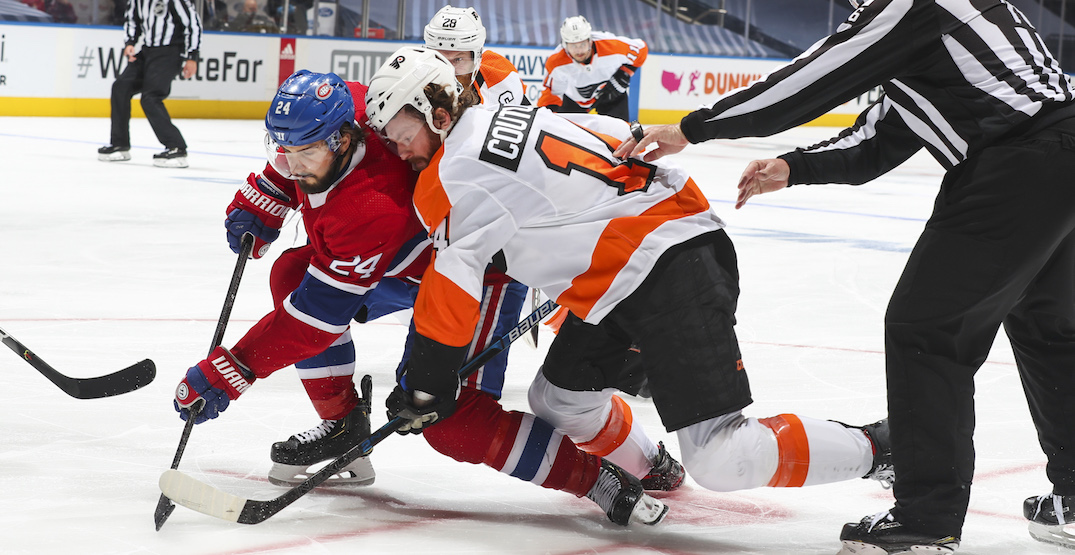 The Montreal Canadiens are staring down elimination.

Their 2-0 loss to the Philadelphia Flyers in Game 4 — the second straight game that they were shut out in — put them down 3-1 in the series.

Just 6:32 into the game, Michael Raffl took a drop pass from Sean Couturier and beat Carey Price with a great shot off the far post and in.

This was bad sign for the Habs in a game they desperately needed to win, given the team that scored first had gone on to win each of their first seven postseason games and how tough goals have been to come by.

Montreal was outshot 11-5 in the first period and didn’t play with the sense of urgency required from a team facing the possibility a 3-1 series deficit.

The Canadiens did get a great scoring chance from Paul Byron, but Ivan Provorov’s stick helped deflect the opportunity above the net.

This game was feeling a whole lot like Game 3, and even with more than a period to go, a 1-0 deficit was feeling like a mountain for the Habs to climb.

So it was unfortunate that with under three minutes to go in the second period, Price picked a terrible time to give up an awful goal, as Philippe Myers extended Philadephia’s lead on a weak shot.

Price has been terrific all postseason, and it would be nice if his team was giving him enough goal support that he could afford to make a mistake once in a while.

Unfortunately, that hasn’t been the case, and that wasn’t a goal he could afford to give up at that moment.

The Canadiens outshot the Flyers 10-5 in the second period, but headed back to the dressing room down 2-0 and badly needing their offence to wake up in the third period.

However, that did not happen. The Canadiens outshot the Flyers 12-7 in the third period and 29-22 for the game, but again couldn’t find a way to beat Carter Hart.

Prior to the game, the Canadiens and Flyers took a moment to honour Dale Hawerchuk, the Hall of Famer who passed away earlier in the day at just 57 years of age after a battle with cancer.

Sending our condolences to Dale Hawerchuk's family and friends. pic.twitter.com/ZzB6RNZBjn

Montreal was shut out for the second straight game and has gone 129:25 without scoring a goal. Despite having scored just five goals so far in the first four games of this series, the Flyers have won three of them and are on the verge of moving on.

The Habs now have an enormous task in front of them. They’ll have to find a way to win three straight games against a team that has only lost twice in its last 18 dating back to the regular season.

The 2020 Canadiens will just have to channel their inner 2010 Canadiens. That team was the eighth seed in the Eastern Conference that managed to come back from a 3-1 series deficit to stun the Presidents’ Trophy winning Washington Capitals in the first round of the playoffs.

It sure would be a fitting 10th anniversary tribute to that team if this team could manage to pull off another miraculous comeback.