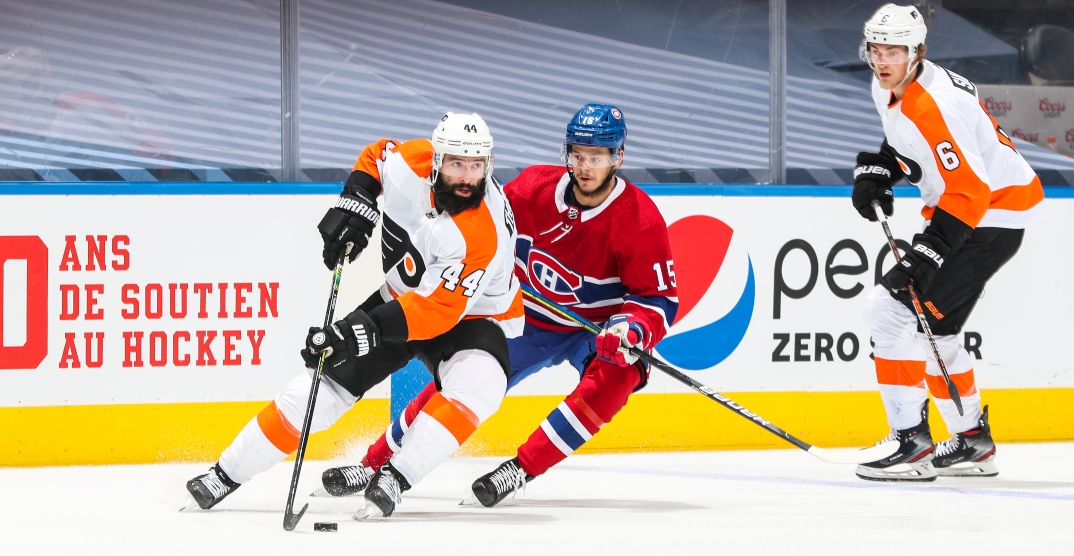 The Montreal Canadiens were able to get Shea Weber a win for his birthday on Friday, but hopefully they had a backup present ready for Carey Price’s birthday on Sunday.

Because although I’m sure all Price wanted was some goal support, his team couldn’t give him any, dropping Game 3 to the Philadelphia Flyers by a score of 1-0 and falling behind 2-1 in the best-of-seven series.

Just 5:21 into the game, Claude Giroux threw the puck towards Price and it deflected off Jakub Voracek and in to open the scoring for the Flyers.

The Canadiens were outshot 8-5 in the opening frame, but were only down 1-0 thanks to their penalty kill successfully killing off six minutes of Flyers power plays.

Montreal’s best scoring chance came when Jesperi Kotkaniemi and Brett Kulak each hit the crossbar within seconds of each other.

That started an unfortunate trend for the Habs in this one. They would ring the puck off iron several more times, including this shorthanded chance by Nick Suzuki on a 2-on-1.

Suzuki hits the post SH on the 2-on-1 #GoHabsGo pic.twitter.com/y7aGMNJioy

The Habs also had three power play opportunities of their own in the second period, but couldn’t capitalize. Philadelphia head coach Alain Vigneault wasn’t happy with Montreal using its top power play unit late in Friday’s blowout victory, but tonight was a reminder that the power play could use all the practice it can get.

The Canadiens outshot the Flyers 8-6 in the middle frame, but headed into the third period still trailing 1-0.

Montreal outshot Philadelphia 10-6 in the third and 23-20 on the night, but couldn’t find a way to score the equalizer.

The Canadiens actually generated more quality chances in this game than you would think just by looking at the shots on goal, but kept either hitting the post or watching Carter Hart make a great save.

Game 3 felt eerily similar to Game 1 for the Habs: A low-scoring game where they were spent the whole time just trying to make up a one-goal deficit, but couldn’t find a way to score, and the Flyers were the team generating more scoring opportunities in the third period even though they were up a goal. It makes you wonder how they managed to make things look so easy in Game 2.

The loss sets up a pivotal Game 4 for Montreal at 3 pm ET on Wednesday.