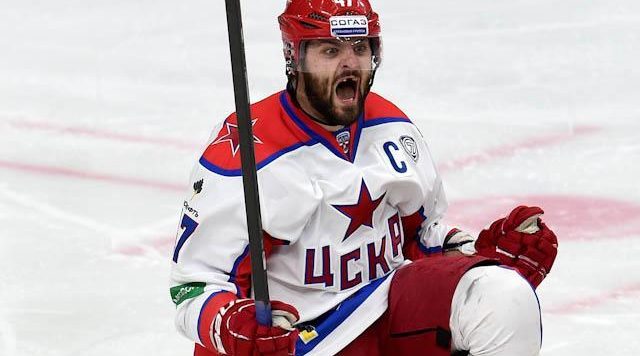 One of the more surprising (and controversial) free agent signings last week was the Montreal Canadiens giving a one-year deal worth $5.75 million to Alex Radulov.

Radulov, of course, is the KHL star who infamously wore out his NHL welcome with a string of questionable antics as a member of the Nashville Predators. But that was a long time ago, and things can change.

#Habs Bergevin says he met w/Radulov, spoke to Shea Weber & Sergei Federov as references. "I believe (Alex) has matured but time will tell."

"What happened in the past is in the past. I want to come back to play in the best league in the world." – Alex Radulov

Many are skeptical of Radulov being able to change his behaviour, but there is a big difference between the ages of 25 and 30. Not to suggest that Radulov’s antics are surely a thing of the past, but a player of his ability is worth the gamble.

Spoke with 3 people today who are very piped into Russian market. All say Radulov has been a completely different person over last 2 yrs.

Radulov has spent the past four seasons with CSKA Moscow in the KHL, where he has been one of, if not the best player in the league. This past season he posted 65 points in 53 games, which is even more impressive when remembering that the KHL does not count secondary assists.

Another impressive Radulov stat? He has never been a minus in his 12 seasons in the NHL and KHL.

Radulov is a good one for the #Habs I've seen him playing past years in KHL and I can assure,he's been the best all around F in the league.

In his 154 NHL games played, the Russian collected 47 goals and 55 assists for a very solid 102 points. Oh, and all but nine of those games were played before he even turned 22.

It’s hard to speculate how many points a player will get when they’re changing leagues, but luckily there was another comparable Russian who did exactly that last season; Artemi Panarin.

Last year at this point I said A.Panarin will be a factor in the NHL.I can go with the same line with Radulov.I have seen enough to believe.

Panarin won the Calder Cup trophy as the best rookie in the NHL this season after posting 77 points in 80 games with the Chicago Blackhawks. The season prior, Panarin posted 62 points in 54 KHL games (slightly worse than Radulov’s 65 in 53 this season).

Of course, Panarin and Radulov have a lot of differences too. Panarin is only 24, and is likely just entering his prime while Radulov – who just turned 30 yesterday – probably falls somewhere on the other end of that spectrum.

Also, Panarin got the benefit of playing top line minutes with Patrick Kane, the best player in the NHL last season. Radulov will not have that benefit.

Still, it seems reasonable to believe that Radulov could produce 50-70 points next season, depending on how he is deployed. Of course, that’s assuming he stays focused on hockey this time.

I don't get the guffaws by McGuire. Radulov is a great player. From all reports he's matured a ton lately.
One year = low risk.
Good gamble.

This signing is a great one for the Canadiens, and a perfect example of a low-risk, high-reward situation.

Adding Radulov greatly addresses the team’s biggest need (scoring), and the one-year deal means that even if it doesn’t work out, there’s no baggage left behind.