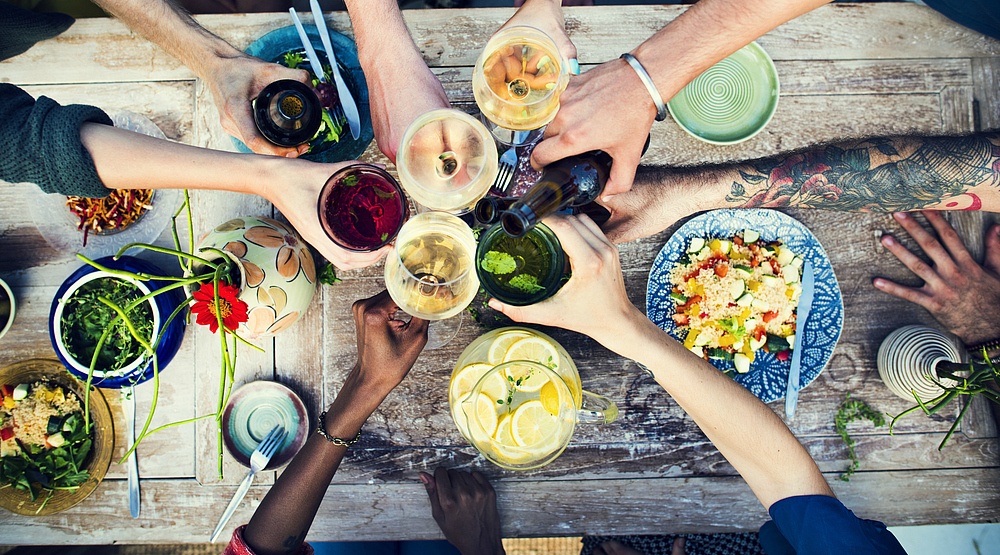 End the summer with a bang by celebrating the wonderful city of Montreal at any of the events listed below. All super fun and 100% free, August is sure to be the best month of the summer, whether you’re dressing up like a French soldier at the 18th Century Public Market or breakdancing at the Under Pressure Graffiti Festival.

Check out these 30 free things to do in August.

What: Anyone ever tell you that you were born in the wrong time period? Well perhaps the 18th century would have suited you better! Take a trip back to 1750, when Montreal’s first public market was founded. Meet farmers, craftspeople, and historic figures from the eighteenth century before sampling some deliciously authentic food like wild fruit jams and spruce beer, all of which is available for purchase.
When: Saturday, August 27, from 10 am to 8pm and Sunday, August 28, from 10am to 6pm
Where: Pointe-A-Calliere, 350 Place Royale

What: There’s only one month of summer left so it’s time to take advantage of the warm, sunny weather! Thanks to Montreal’s infamous “picnic law,” spending time outside has never been more enjoyable. Seriously, you have no excuse not to head on over to your favourite park with a beer in hand and a box of crackers. What are you waiting for?
When: Any time!
Where: Any of Montreal’s beautiful parks

What: Barbie Expo is the largest permanent collection of Barbie dolls in the world – and guess what? It’s currently in Montreal! With over 1,000 one-of-a-kind Barbie dolls, you can relive your childhood (whether you enjoyed dressing them up or tearing their heads off). The exhibit is located on Rue Peel and admission is totally free.
Where: 1455 Rue Peel
When: Open Monday to Wednesday from 10 am-6 pm, Thursdays and Fridays from 10 pm-9 pm, Saturday from 10 am-6 pm, Sundays from noon-5 pm.

What: Possibly the most romantic spot in Montreal, Les Amis de la Montagne is hosting a free concert each month of the summer at Chalet du Mont-Royal (the beautiful building at the lookout). Bask in the sun while overlooking our magnificent city and taking in some sweet classical music tunes. This month’s concert will be held on August 7th at 3:00pm.
When: August 7 at 3 pm
Where: Chalet du Mont-Royal

What: In need of some deep relaxation? Why not consider meditation? Rigpa Canada, a Buddhist Tibetan meditation centre, has been offering free meditation classes for several years. Sessions are held on Tuesday evenings from 7:00pm until 8:15pm, allowing you 75 minutes to clear your head. No registration is necessary, just show up ready to relax!
Where: 7595 Boulevard Saint Laurent
When: Tuesday evenings from 7:00pm until 8:15pm

What: Take in some Italian culture at Little Italy’s annual Italian Week. This year promises to be better than the last with endless amounts of free activities for the whole family. There will be a sidewalk sale, fashion show, outdoor museum, guided tours, and a FIAT 500 car exposition all for the low, low price of $0.
When: August 5 to 14
Where: Various locations

Downtown Screenings Under the Stars

What: The Society for Art and Technology will be screening 13 movies over the course of the summer for Montrealers to enjoy free of charge. This is the tenth year in a row that these screenings have been held, and as per usual, the programme features a fairly eclectic lineup of films. This year’s most anticipated screenings include Back to the Future, 20,000 Days on Earth, and a 16mm French version of Pinball Summer.
When: June 9 to September 8
Where: Various locations

What: Take part in the ultimate cultural celebrate, Pride Montreal. With happy hours, barbecues, art exhibits, and drag shows happening all week long, there really is something for everyone. Pride Montreal culminates in the annual Pride Parade happening on August 14th.
When: August 8 to 14
Where: Various locations

What: Presented by Sirius XM, the Orchestre Symphonique de Montreal is hosting their annual free concert at Esplanade Financière Sun Life. This year’s edition will commemorate the 70th anniversary of the bombing of Hiroshima before launching into a night at the opera.
When: August 5, 7 pm
Where: 1A5, 4139 Pierre-de Coubertin Ave

What: Celebrate Aboriginal cultures at Montreal’s First Peoples Festival. Running during the first full week of August, the festival features seminars, concerts, workshops, art galleries, and film screenings that will teach the Montreal community about the FIrst Peoples of Canada.
When: August 3 to 10
Where: Quartier des Spectacles

What: In collaboration with Cinema Beaubien, TOHU is hosting free film screenings throughout the summer. Called Les Etoiles Au Cinoche, screenings are all in French and will be shown in the heart of TOHU’s public square. Check out the film schedule here, and be sure to bring a blanket and some popcorn.
When: July 21 to August 18, Thursdays at 8:30 pm
Where: 2345 Rue Jarry Est

What: Did you know that Montreal is home to an actual graffiti festival? Well, now you do and you have no excuse not to check it out on the first weekend of August. Prepare for skate ramps, breakdancing competitions, live hip hop music, and of course, lots of graffiti.
When: August 13 to August 14
Where: TBD

What: Head to Chinatown between August 12th and 16th for their last street sale of the summer. It’s totally free to attend, though I can’t guarantee you won’t be tempted by the vast array of ridiculously inexpensive paraphernalia…or the dumplings.
When: August 12 to 16
Where: Chinatown

What: Club 6/49 has been offering free salsa lessons to Montrealers for over 30 years. If this is your first time, head over to this downtown club on Monday nights at 9:30 pm. If, however, you are a seasoned salsa expert, Club 6/49 also offers free classes for advanced dancers on Wednesdays at 9:30 pm.
When: Mondays at 9:30 pm
Where: 1112 Rue Sainte Catherine Ouest

What: Featuring three days of outdoor festivities, Falla is Montreal’s only festival dedicated to flames. Outdoor concerts, circus acts, and artistic performances will take over Cite des Arts du Cirque, all of which will culminate in a 35 foot piece being set on fire. It is sure to be quite the sight.
When: August 11 to 13
Where: TOHU, Cite des Arts du Cirque, 2345 Rue Jarry Est

What: Are you a fashionista? Then you can’t miss Montreal’s Fashion and Design Festival. There will be pop up shops, unconventional fashion shows, and special talks from some of the biggest designers in the biz. Head to Quartier des Spectacles this August for some fashion inspiration.
When: August 15 to 20
Where: Quartier des Spectacles

What: Celebrate Japanese culture at the 15th edition of Matsuri Japon, Montreal’s very own Japanese festival. The festival is totally free and includes an exciting array of activities including a drum performance, a martial arts stage, a Shinto ceremony, and a chance to dress up in a typical Japanese dress, a yukata.
When: August 13 at 11 am
Where: Japanese Canadian Cultural Centre of Montreal.

What: Every weekend in July and August, the SDC Vieux-Montreal invites Montrealers to attend classical music performances at Place Jacques-Cartier. These free chamber music concerts feature a small orchestra and many of the musicians have been hand-picked from McGill University’s Schulich School of Music. Come out to hear some beautiful music in Old Port.
When: Saturdays and Sundays in July and August from 11 am to 1 pm
Where: Place Jacques-Cartier

What: Head to NDG for a packed week of art and cultural activities. Featuring everything from painters to musicians to opera singers, NDG’s annual arts week is a great way to explore the neighbourhood.
When: August 22 to 28
Where: Avenue Wilson

What: Prepare for the sidewalk sale of the century happening from August 25th until August 28th. Avenue Mont-Royal will be shut down for four days and will become a mecca for all the bargain hunters out there. Think of this like a rummage sale and a sidewalk sale combined into one. If you’re on a budget, take this as an opportunity to do some window shopping.
When: August 25 to 28
Where: 10 am to 11 pm

What: The Nuit Blanche sur Tableau Noir is one of the most anticipated arts festivals in Montreal. In addition to the sidewalk sale, you can play a friendly game of urban golf or take in some street art as 30 artists will gather to paint La Grande Fresque de Nuit. You can easily spend $0 while still taking in one of Montreal’s most artsy festivals.
Where: Avenue Mont-Royal from St. Laurent to d’Iberville
When: August 25 to 28

What: What’s the best day to party in Montreal? Sunday, of course! Join the legendary Sunday afternoon party on Mount Royal that is Tam Tams. With only a few weeks of summer left, it might be time to finally join that drum circle you’ve been staring at for the last two months.
When: Every Sunday afternoon from May 1 to September 25
Where: Parc Mount Royal

What: Get ready to sweat at Montreal’s very own extreme obstacle course. Designed by former U.S. Marine Drill Sergeant, Tony A., the Gatorade O Course promises to challenge you both mentally and physically during its 2.5 hour span. The best part? Gatorade Canada teamed up with The O Course to bring you the 2016 summer series completely free of charge!
When: August 13, 9:30 am until 12 pm
Where: University of Montreal – 2900 Boulevard Edouard-Montpetit

What: On select days only, the Institute of Tourism and Hospitality of Quebec is offering Montrealers a free guided tour of Quartier des Spectacles. Prepare for an in-depth history lesson on one of Montreal’s most beloved landmarks. Be sure to reserve tickets in advance.
When: July 28 to October 2, various dates and times
Where: Quartier des Spectacles, meet on the corner of Balmoral Street and Sainte Catherine Street West

Watch a Documentary at the Redpath Museum

What: McGill University’s Redpath Museum hosts documentary film screenings throughout the summer. Totally free of charge, the documentaries chosen are scientific in nature and cover a wide variety of topics like caves, family farms, and sustainable cities.
When: August 7, 14, 21, and 28 at 3 pm
Where: 859 Rue Sherbrooke Ouest

What: Montreal is hosting its very own Roga session (a combination of running and yoga) on August 6th. To kick things off, participants complete a 3km or 6km run. After the run, you’ll be treated to a complimentary yoga session courtesy of Andrew Bathroy of Element Yoga and Chloe Robertson of Wanderlust Yoga Studio. Reap the benefits of both yoga and running in one fun morning session! Be sure to reserve a spot for this free event in advance.
When: August 6th from 10 am until 1:30pm
Where: Statue George-Étienne Cartier – Parc Mont-Royal