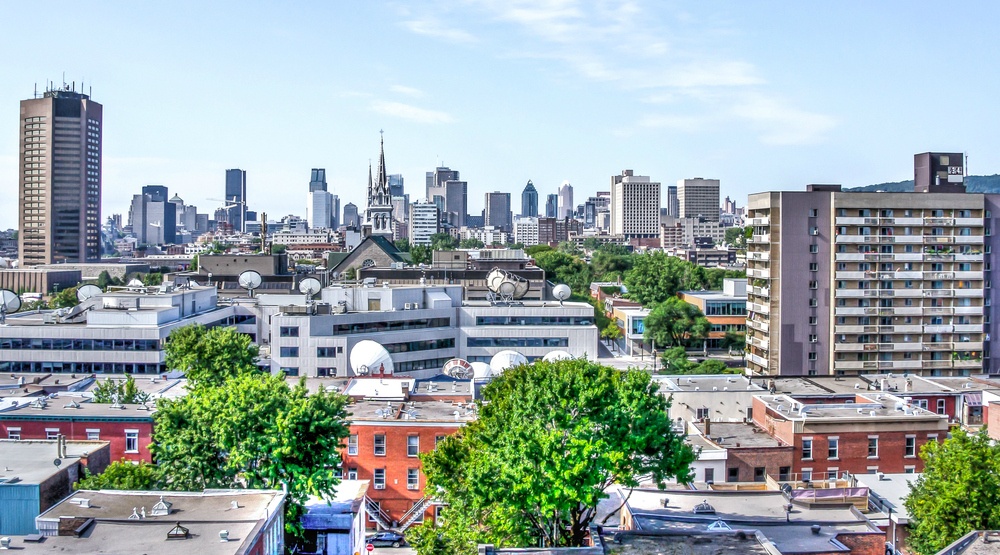 In addition to the typical slew of incredible festivals (we’re talking about Osheaga, Just for Laughs, the International Jazz Festival, and Mural Fest), a ton of exciting activities, some of which are in honour of the city’s 375th anniversary, are going down in Montreal this summer.

To get you pumped for summer 2017, check out 21 things to look forward to in Montreal this summer.

The International Jazz Festival returns to our fair city this June. Taking place over the course of two weeks, hundreds of jazz musicians will flock to Montreal to perform in both outdoor and indoor venues across the city. 2017 headliners include Squarepusher, Matt Holubowski, Bob Dylan, Her, and Andrea Lindsay.
When: June 28 – July 8, 2017
Where: Various locations

The Great Wheel of Montreal

Old Port will soon be home to a giant ferris wheel. The Great Wheel of Montreal is scheduled to open in June 2017. The wheel will stand 60 meters tall, making it one of the largest in North America, and offers Montrealers a 360 degree view of the city. According to the official website, the observation wheel will be made up of 42 cabins that contain 8 seats each, two television monitors, and a centre table.
When: June 2017, 10 am-11 pm daily
Where: Ile Bonsecours, Old Port

Montreal’s favourite Sunday EDM festival, Piknic Electronik, is back for summer 2017! Kicking off May 21st in Parc Jean Drapeau, this outdoor electronic music festival is a true sign that summer has returned to the city. 2017 marks the 15th edition of Piknic Electronik, so you can bet the lineup is going to be a particularly good one.
When: Every Sunday from May 21 until September 24, 2017
Where: Parc Jean Drapeau

According to the official program of events for Montreal’s 375th anniversary, a not-so-secret art installation featuring giant marionette dolls will be set up in the city next May. Titled, The Giants, the unique sculptures, otherwise known as The Giant Marionettes of the Royal de Luxe street theatre company will be landing in Montreal in May 2017. The exhibit is tentatively planned for May 19th until the 21st, however the location is still under wraps. This means for three full days Montrealers will get to marvel at these historic figures and “experience a very first for the city: the gentle and grandiose promenade of the Royal de Luxe giants.”
When: May 19-21, 2017
Where: TBA

Montreal’s funniest festival returns for roughly three weeks this July. Though the entire programme has yet to be announced, comedians John Mulaney and Mike Birgbiglia are confirmed. Check the JFL website for updates!
When: July 12 – 31, 2017
Where: Various locations

A dazzling water show paying tribute to the Saint Lawrence River will be taking over Old Port this summer. Titled Montreal Avudo, this spectacular water show will project life size images inspired by the city’s history onto the water.  The show will include an 11-storey tall shipping container tower (the largest in the world). All of this magic will be capped off by an original score created by Maria Bonzanigo and recorded with the Orchestre Métropolitain and the Petits Chanteurs du Mont-Royal.
When: Thursday to Saturday from May 12-September 2, 2017, 9:30pm and 10:30pm each night
Where: The west sector of the Old Port of Montréal, near the King Edward Pier and the Montréal Science Centre

To celebrate the city’s 375th anniversary, all 19 of Montreal’s boroughs will be hosting parties. Officially titled La Grande Tournee celebrates Montreal: 19 boroughs in 19 weekends, the event is being organized by Cirque Eloize, who will be travelling across the Montreal to help honour the city, its people, and its history. Each weekend, a neighbourhood park will host a party for all ages that speaks to the characteristics of that community. Not only are these consecutive parties, set to take place between Thursday and Sunday of each week, intended to highlight what’s special about each borough, but they provide a chance for tourists and people from other parts of Montreal to learn about the city. In addition to a simple gathering of residents, each borough’s party will feature all sorts of entertainment. Activities include circus and artistic performances, historical exhibitions, live music, treasure hunts, and farmers’ markets.
When: May 12-September 17 (Thursday to Sunday)
Where: TBA

Prepare to be mesmerized! Montreal’s annual International Fireworks Competition returns for another year. Kicking off on Canada Day with a Montreal-themed show, the 2017 edition will see Poland, Portugal, France, England, Italy, and Germany competing to display the best fireworks show possible. Don’t miss out on the fun, whether you’re at La Ronde or watching from across the river in Old Port!
When: July 1 – August 5, 2017
Where: La Ronde, 22 Chemin Macdonald

Mark your calendars! Montreal’s resident amusement park, La Ronde, is officially scheduled to open on May 20th. Less than two months away, we suggest you start preparing for the upcoming season. What’s the best way to prepare, you may ask? We recommend taking advantage of the park’s incredible season pass deal! Once you’ve purchased your passes, it’s time to curate your plan of attack. For a little inspiration, check out 11 rides at La Ronde you have to try. Alternatively, you can read all about La Ronde’s insane new ride, Titan, here.
When: May 20
Where: La Ronde, 22 Chemin Macdonald

A unique traveller’s village will soon be popping up along the Lachine Canal. Titled Village Des Ecluses, the newly built area will offer “urban camping and boating” accommodation for tourists. Village Des Ecluses will be situated on the Lachine Canal Historic Site and will boast close proximity to downtown Montreal. Made of three types of accommodation, “A Night on a Boat,” “The Lock Keeper’s Cottage,” and “Park Canada’s oTENTik,” guests are able to experience Montreal like they never have before.
When: Beginning May 16, 2017
Where: Lachine Canal

Step back in time to New France and experience a magical town market like never before. In honour of the city’s 375th anniversary, Montreal is hosting a unique event called Dating in New France. Not only will guests learn what it was like to live under the French regime, but they will have the pleasure of walking around a “festive spring market” and meeting all sorts of characters from the time period. There will be live musicians, as well as craftsman and entertainment for children. And of course, there will be lots of food, from freshly baked bread to artisanal jams.
When: May 19-22
Where: Place d’Youville

Sure to give you a major rush of adrenaline, Old Port becomes home to Adventures Wet Set MTL’s fleet of jetskis every summer. Opening on May 15, 2017, tourists and locals alike will once again have the opportunity to experience the city through the eyes of the Saint Lawrence River. Adventures Wet Set MTL offers guided tours of the city, as well as individual rentals. Rates start at $45 and go up to $375.
When: May 15-October 15, 10 am-8 pm
Where: Quay Jacques-Cartier

As part of Montreal’s 375th anniversary celebrations, Sherbrooke Street will temporarily be turned into an open-air museum.  This pop-up museum will feature 67 original works of Canadian art that “convey a message of peace and reflect the universal values of humanism, tolerance and openness that inspired Expo 67.” Finally, flags from each of the 13 provinces and territories, and from over 200 countries will be flown above the exhibition on Sherbrooke.
When: May 29 – October 2, 2017
Where: Sherbrooke Street West between the McCord Museum and the Montreal Museum of Fine Arts.

The Montreal Medieval Fair returns to Olympic Park’s Centre Pierre Charbonneau next month for three days of historical fun. Beginning on May 5th and ending May 7th, the fair takes place both inside the centre and outdoors, and includes everything from live music and festive dancing, to fire spitters and acrobats. Hundreds of exhibitors and activities make up the three-day event. Main events include LARP tournaments, a masquerade ball, a treasure hunt, and unique booths like “How to choose your dragon eggs.” Whether you’re a history buff or you just love Game of Thrones, The Montreal Medieval Fair is for you!
When: May 5-7, 2017
Where: Centre Pierre Charbonneau, 3000 Viau St

The largest food truck festival in the province begins soon! Olympic Stadium is known for their awesome events, with our personal favourite being First Fridays. The most glorious of days, First Fridays are a special kind of culinary event in which all of the city’s food trucks gather at Olympic Stadium. Allowing Montrealers to sample dishes from over 50 food trucks, you can expect to find everything from tacos and churros, to mac and cheese and lobster rolls. Taking place on the first Friday of the month between May 5th and October 27th, be sure to start the summer off right by hitting up this awesome event.
When: May 5 – October 27
Where: Olympic Stadium

Mural Festival returns for 10 whole days this June! Prepare for sidewalk sales, terrasses, food trucks, and best of all, incredible street art. Be sure to celebrate the start of summer with this awesome outdoor street festival!
When: June 8 – 18, 2017
Where: Saint Laurent between Sherbrooke and Mont Royal

EDM music festival, Ile Soniq, returns for yet another year and the 2017 lineup is better than ever. Announced last week, Ile Soniq 2017 headliners are Afrojack, Porter Robinson, Migos, and Tiesto. Other musical acts throughout the weekend include Alan Walker, Rezz, Spag Heddy, Excision, John O’Callaghan, Infected Mushroom, Desiigner, Jauz, Kungs, and many more. Ile Soniq will take place over the course of the August 11th/12th weekend in Parc Jean Drapeau, so we recommend marking your calendars ASAP! Festival passes start at $140 and go up to $265 and will be on sale soon. Prepare for the biggest EDM festival of the summer.
When: August 11-12, 2017
Where: Parc Jean Drapeau, Montreal, Quebec

Grab your sangria kits and drum sets! Tam Tams will soon be returning to our fair city and we couldn’t be more excited. After all, is there any better sign that summer has arrived? Taking place every Sunday during the summer months, Tam Tams is one of the city’s best and most popular unofficial events. Tam Tams is a magical outdoor festival where Montrealers far and wide gather in Parc Mont Royal for an afternoon of food, fun, and music. Though the drum circle is located at the Sir George-Etienne Cartier Monument, vendors and entertainment spread throughout the park, all the way from Avenue Mont-Royal to Duluth. Remember to bring food and wine, and take advantage of Montreal’s picnic law!
When: May 7 – September 24, 2017
Where: Sir George-Etienne Cartier Monument

The famed Academy Award-winning German composer, Hans Zimmer, just announced a North American tour.Hans Zimmer Live is Zimmer’s first-ever tour. It kicks off at Coachella on April 14th, before making its way across the United States and Canada. Zimmer is responsible for creating the music behind some of the most famous films in existence. We’re talking about The Lion King, The Dark Knight Trilogy, Interstellar, Inception, Gladiator, Pirates of the Caribbean, The Thin Red Line, The Last Samurai, and more. Zimmer will be playing music from all of these films, so get ready to be magically transported into the worlds of your fave movies. In essence, this is the most exciting symphony orchestra performance that’s come to the city in a long time.
When: July 30
Where: Bell Centre

Montreal’s biggest music festival returns this August. The full lineup for Osheaga includes 2017 headliners The Weeknd, Lorde, and Muse. We can’t wait to see Canadian born The Weeknd perform “Starboy,” hear Lorde belt out tunes from her highly anticipated second studio album, and watch English rock band Muse take the stage. In addition to the three headliners, there are over 50 musical acts set to perform over the course of the weekend. It’s guaranteed to be quite a show.
When: August 4-6, 2017
Where: Parc Jean Drapeau, Montreal, Quebec