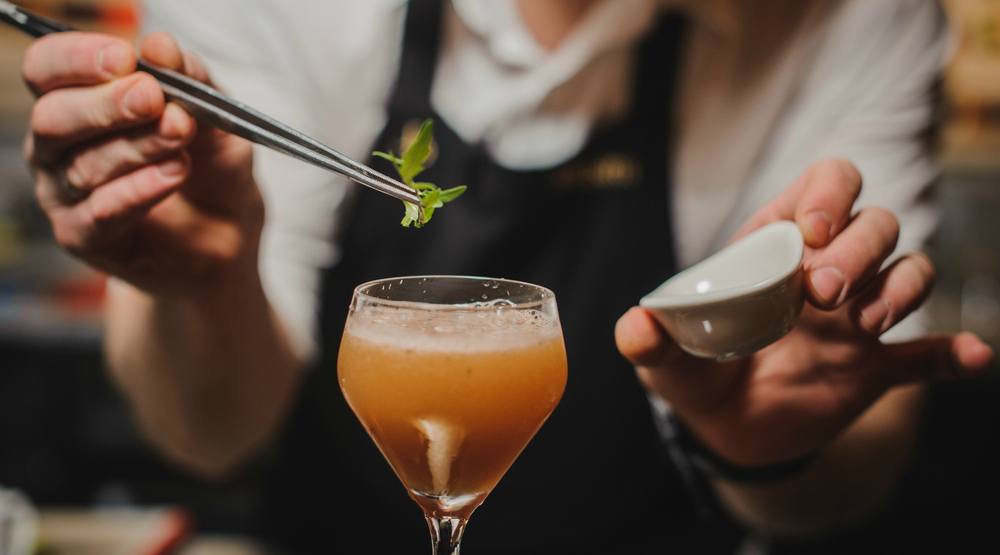 Cocktails are pretty much the tastiest drink you can get at a bar. Filled with goodies like fresh fruit, spices, and juice, who would want boring old beer when they could have a colourful cocktail?

The next time you’re planning to get drinks with friends, consider this list of 11 must-try cocktails in Montreal (not only are they tasty, they look great too).

This Montreal-based specializing in Canadian fare has become quite famous in recent years for its insane Bloody Caesar. Not only do they mark a darn good version of the Canadian drink, but they top it with anything from full onion rings and fries, to mini grilled cheese sandwiches and cheeseburgers. It’s kind of like a drink and a meal all in one!
Where: Multiple locations

As you’re probably aware, Bar Brutus is known for serving nearly everything on their menu with bacon – and that includes the drinks. One of the best cocktails on their menu is none other than the Bacon Old Fashioned, consisting of Ol’ Major Bacon Bourbon garnished with orange zest and a full strip of bacon.
Where: 1290 Rue Beaubien E

Make all your Candyland dreams come true courtesy of the Cotton Candy Martini at La Belle et Le Boeuf. Comprised of vanilla vodka, lime juice, soda, and a chaser of marshmallows and cotton candy, you are guaranteed to get a sugar rush when downing this cloud-like cocktail.
Where: 1620 Rue Sainte-Catherine O

The Big Kahuna from Deville Diner-bar

Pretend like you’re on vacation in Hawaii with a little help from Deville Dinerbar. With an entire “Aloha” section of the menu, you can choose from a selection of cocktails all of which will be served to you in a coconut. The Big Kahuna is one of their best and is made with rum, coconut water, strawberries, and agave nectar syrup.
Where: 1425 Rue Stanley

Relive the summer by taking a sip of the American Pie cocktail, exclusively offered at La Distillerie. Though you’ll surely be tempted by several items on the menu, the American Pie cocktail is a safe bet. The epitome of apple pie in cocktail form, this unique beverage is made by blending Grand Marnier, vodka, white beer, pear puree, lemon, limoncello, all spice, and apple juice.
Where: Multiple locations

This Russian bar serves espresso by day and cocktails by night. Open into the wee hours of the evening, the next time you’re in you have to try the Moscow Mule. It’s simple, but classic. Made of just three ingredients: vodka, ginger syrup, and lime, you will definitely feel the effects of this no-frills cocktail.
Where: 92 Avenue Laurier O

Christmas on the Beach from Bar Le Lab

Just in time for the holidays! Bar Le Lab is currently offering a special drink known as Christmas on the Beach. This chocolate cocktail, mixed with spices and berries, will become your go-to Christmas drink in no time.
Where: 1351 Rue Rachel E

Sake Slush from Big in Japan

Cool off with the refreshing Sake Slush available at Big in Japan. Made by combining Sake with a ginger and lime slushie, you’ll never be satisfied with a regular old slushie from 7/11 again.
Where: 3723 Boul St-Laurent

Sip a cocktail out of a hollowed out pineapple for the ultimate tiki experience. Le Mal Necessaire specializes in island-themed drinks, and few are better than the Painkiller. Consisting of a tropical blend of rum, pineapple, coconut cream, and orange.
Where: 1106 B Boulevard Saint-Laurent,

Unlike anything you’ve ever tasted, Barroco is constantly serving up unique cocktails and the Ostrogoth Cocktail is no exception. A sip of this drink and you’ll be taking in Cirka gin, celery bitters, fresh grapefruit juice, Meletti amaro, and Fontalia vermouth.
Where: 312 Rue Saint-Paul O

Four ingredients create this addictive cocktail, the Deluxe Pimm’s Cup. Made of Pimm’s, fresh lemonade, soda, and prosecco, there is no drink as refreshing and bubbly as this from Dominion Square Tavern.
Where: 1243 Rue Metcalfe