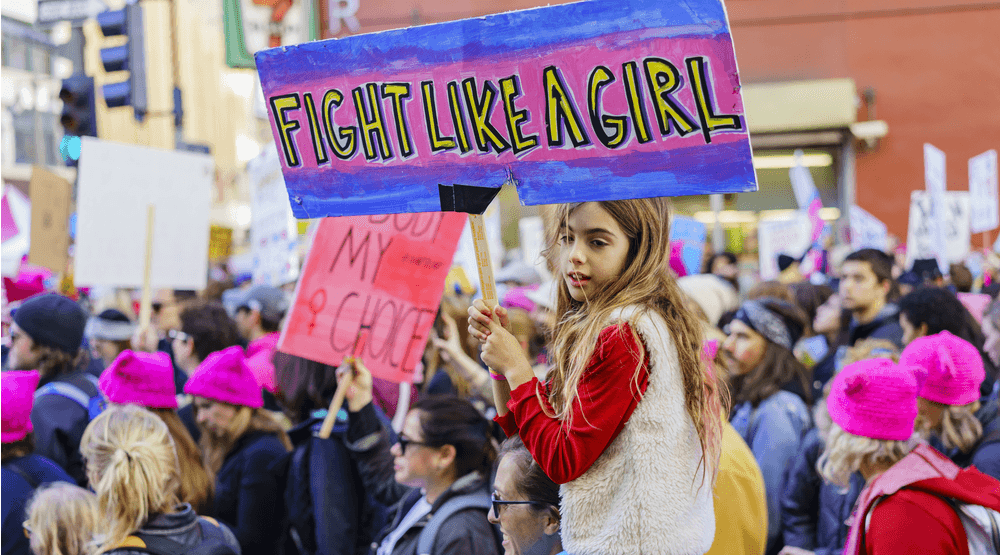 I’m not going to explain why International Women’s Day is still so relevant and important. I’ve done that before so many times I’m frankly bored of my own voice. This is merely about commemorating the day and using it as an opportunity to educate yourself on women’s issues and intersectional feminism.

Wear red and strike if you can

Many women around the world will be taking part in a global strike to highlight gender rights and abuses and raise awareness of the enormous value that women of all backgrounds add to our socio-economic system. The ‘A Day Without a Woman’ initiative is urging many to take the day off from paid and unpaid labour. Since many women cannot afford to do that, you can simply wear red that day in solidarity with the global women’s movement.

In honour of International Women’s Day there will be a photo exhibit at the Bibliothèque et Archives nationales du Québec (475, boul. De Maisonneuve Est). The Women and Words photo exhibit features women who inspire us through their courage and vision, whose stories we want to share. Each portrait will be accompanied by a feminist essay outlining their vision of equality.

First premiered at the Sundance Film Festival, Audrie & Daisy is a wrenching documentary about two teens who are sexually assaulted by boys they considered friends, humiliated online and harassed by their communities. This documentary will make you angry and it should.

She’s Beautiful When She’s Angry is a provocative look at the birth of the women’s liberation movement in the U.S. between 1966-1971 and the brilliant, outrageous, angry women who were part of it. Really worth watching!

If you haven’t seen it by now, Miss Representation explores the mainstream media’s often disparaging portrayals of women and how they contribute to the under-representation of females in positions of power. An eye-opener!

On the flip side, The Mask You Live in, shows what toxic masculinity and strict gender-assigned roles and expectations do to young boys and men by stifling their emotions.


Salute the women in your life for their emotional labour

Say a grateful “thank you” to those who contribute so much in such a seamless fashion you barely even notice. I’m talking about your mother who’s sending you leftovers even though you’re a grown woman, or your girlfriend who’s making sure to book that doctor’s appointment for you, or your wife who always signs “From the Both of Us” when you both know she’s the only one who went shopping for that Christmas gift for your nephew.

Take in a comedy show

This Thursday, March 9, hit up a comedy show featuring comedians at the forefront of hilarious social commentary on topics ranging from abortion to sexual assault to that wacky new trend of matte lipstick.

Featuring Montreal comics like Kirsten Finch, Natalie Willett, and Tranna Wintour, Hysterical: A Comedy Show is certain to be both funny and feminist.

Show is at 7 p.m. at 1426 Bishop St., on the second floor of McKibbin’s Irish Pub. There is a suggested donation of $5, with half of the donations going to the performers and half to the Native Women’s Shelter of Montreal.

Watch ‘Status Quo? The Unfinished Business of Feminism in Canada’

Feminism has shaped the society we live in. But just how far has it brought us, and how relevant is it today? Directed by Karen Cho, I continue to rave about this amazing 2012 NFB feature documentary that zeroes in on key concerns such as violence against women, access to abortion, and universal childcare. You can purchase the entire documentary on the NFB site, but the ‘abortion rights’ segment of the doc has been uploaded on YouTube by the NFB. You should watch it.

Pick up a book written by a woman

Anything written by Caitlin Moran is a real laugh-out-loud treat, but How to Be a Woman is mandatory reading. The brilliant Chimamanda Ngozi Adichie’s We Should All Be Feminists is an eloquently written essay about inclusion and awareness in precise, simple terms. Lindy West’s Shrill is a ferociously witty and thoughtful book on social injustice, trolling, fat shaming, and rape culture. You Can’t Touch My Hair: And Other Things I Still Have to Explain by Phoebe Robinson is a book that discusses both race and feminism. Laurie Penny was a brilliant, insightful feminist writer way before a bunch of guys suddenly discovered her when she wrote about Milo. I can’t recommend Unspeakable Things: Sex, Lies and Revolution enough. Women’s literature continues to be thought of in many literary circles as mere “chick lit” as if half the world’s population is a niche market, but male authors miraculously speak for us all! You cannot understand the intricacies and beauty of women’s voices, lives, preoccupations and concerns without reading their words.

As ridiculously off the mark and a total time waster as social media can often be, nothing educates and elucidates quite as brilliantly. The quickest way to become aware of the concerns of so many women around the world is to follow the hashtags and see what they choose to speak about. It will also be a quick introduction into online trolls and misogyny, as I predict that countless of people will hijack the hashtags to spread their particular brand of sexism and deep denial.