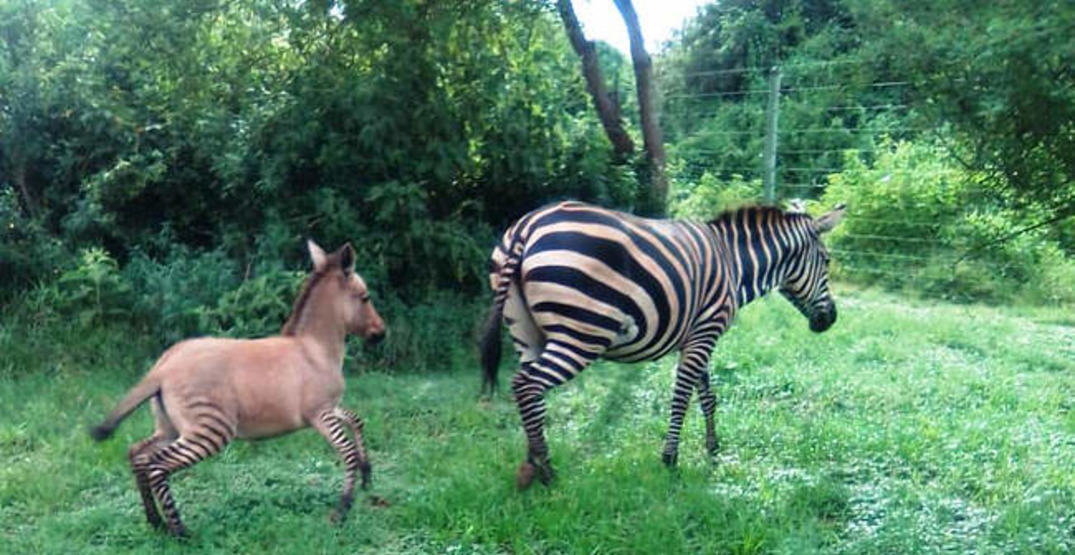 Kenya’s Sheldrick Wildlife Trust (SWT) announced the arrival of an unexpected bundle of joy this month, a zonkey!

A hybrid of a zebra and a donkey, a zonkey is a highly unusual and rare breed.

According to a post published to the Trust’s website, last May, a stray zebra had struck out on its own out of the Tsavo East National Park, one of the oldest and largest parks in Kenya, into a local community that borders it.

She decided she liked it there, so she made herself at home and became “an honourary member” of a local woman’s cattle herd.

She remained there for weeks until the story was picked up by local media outlets, at which point the SWT team was asked to assist in relocating the zebra back to the protected park.

Because she had become accustomed to living community life, she was translocated to the Kenze Anti-Poaching Team base in Chyulu National Park, where a close eye could be kept on her as she settled in.

However, it was later discovered that the zebra had a brush with romance during her adventures, as a fence maintenance team spotted her earlier this year with a tiny foal by her side.

Some weeks later, the SWT team was finally able to catch a proper glimpse of the two.

“That was when her birth announcement revealed a whole new, surprising twist,” the post explains.

Apparently, when zebra foals are born, they have brown and white stripes that later turn black. However, this baby’s body was “suspiciously light on stripes” with more of a light brownish coat.

At first, they chalked it up to the foal having a nice romp in a mud bath.

“But then the truth dawned on us,” the post continues, “Our wayward zebra had given birth to a zonkey!”

The zonkey has the stocky body of its donkey father with the striped legs of its zebra mother, which makes its appearance unique, to say the least.

Although its life will be otherwise normal because zonkeys are technically mules, once this foal reaches maturity, it will be unable to successfully breed, the post explains.

“We’re happy to report that mum and baby are thriving,” it continues.

The Sheldrick Wildlife Trust has raised many orphaned zebras over the years, and this pair will soon be joined by others when the time is right, and it is likely that other wild zebras in the park will also discover them eventually.

“Until that day comes, they seem quite content to spend their days grazing side-by-side,” the post concludes.

“A sight that makes us all stop and marvel at the wonders of nature.”