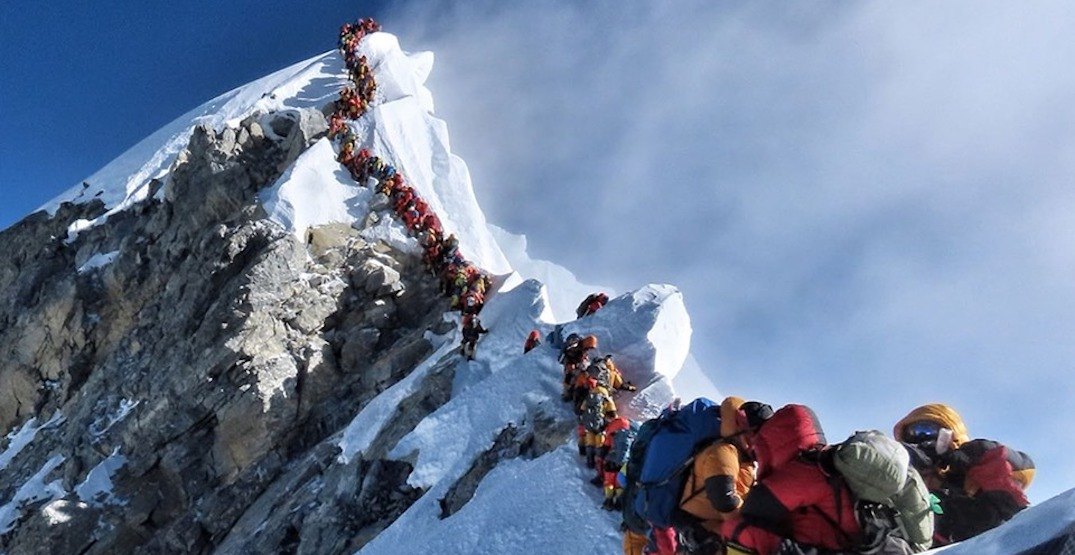 Thinking of checking Mount Everest off your bucket list? You may want to think again.

Climber Nirmal Purja posted the now-viral photo of Earth’s highest peak to Facebook on May 22, leaving the world in shock and disbelief at the sight before them.

The image shows a long lineup of climbers along the Hillary Step, a nearly vertical rock face that serves as the last real challenge before reaching the top of Mount Everest via the southeast route.

“I summited Everest at 5:30 am and Lhotse 3:45 pm despite the heavy traffic (roughly 320 people),” wrote Purja, a Nepali mountaineer who is now attempting to climb all 14 of the 8,000 m Himalayan peaks in a single seven month season.

Because of the strong jet stream that hovers near Everest’s 29,029-foot summit for most of the year, there are limited weather windows, (often two to three days in late May,) when it’s safe for climbers to make a push for the summit—forcing many expeditions to all go for it at the same time.

The now-viral photo quickly spread across social media channels, raising concerns about the growing commercialization of expeditions and the lack of experience amongst climbers, who are flocking to summit Everest in record numbers this year.

Just a few days after the photo released, American attorney Christopher John Kulish, 62, died after reaching the top of Everest on the Nepalese side of the mountain, bringing the death toll for the 2019 climbing season to 11 people.

In a recent interview with CNN, veteran climber David Morton shed some light on the overcrowding and subsequent deaths, having descended Everest last month after getting around 100 meters from the summit for a research project.

“The major problem is inexperience, not only of the climbers that are on the mountain but also the operators supporting those climbers,” he explained.

“Everest is primarily a very complicated logistical puzzle and I think when you have a lot of inexperienced operators as well inexperienced climbers along with, particularly, the Nepal government not putting some limitations on the numbers of people, you have a prime recipe for these sorts of situations happening.”

The rising death toll, coupled with shocking amounts of trash recently recovered from Mount Everest, has the world seriously analyzing the impacts of inexperienced mountaineering, and whether or not new laws and measures should be put in place to protect both climbers and the environment going forward.