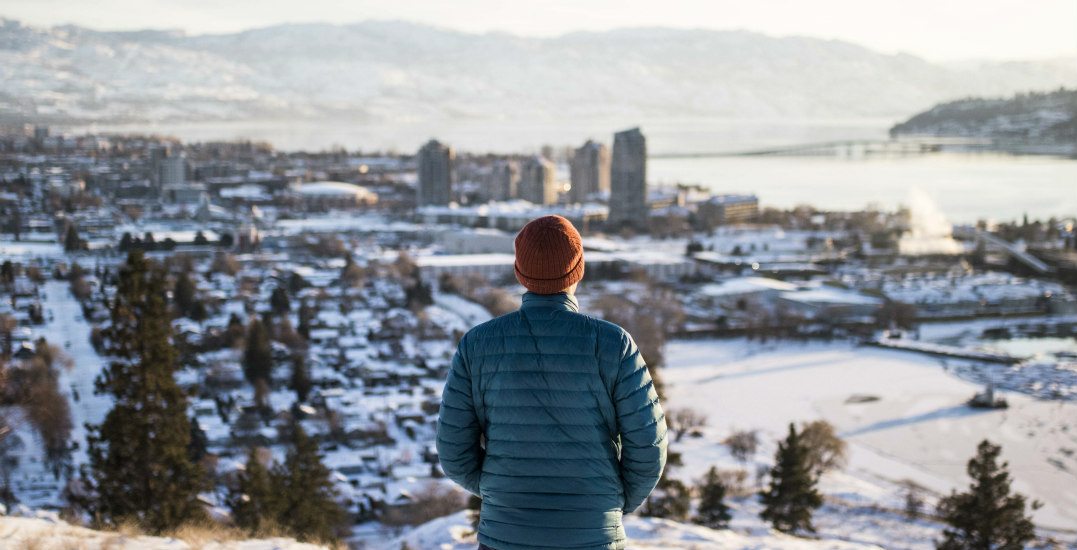 It’s no secret that Calgary winters are long, but heading to Maui to lay on a beach for a week isn’t the solution for everyone. If you’re looking for a mild-weather winter getaway and have gone skiing at Lake Louise too many times to count, consider a short trip to Kelowna.

Located in the heart of British Columbia’s Okanagan Valley, Kelowna is known as an incredible hybrid of food, culture, and outdoor adventure. But given the number of beaches and golf courses, it’s also typically (and incorrectly) thought of as just a summer destination.

Okanagan champagne powder, wintery wine tours, snow-covered trestles, and plenty of places to warm up with a locally-brewed drink in hand make Kelowna the ultimate nearby winter getaway. Here are five good reasons to visit this city this season. 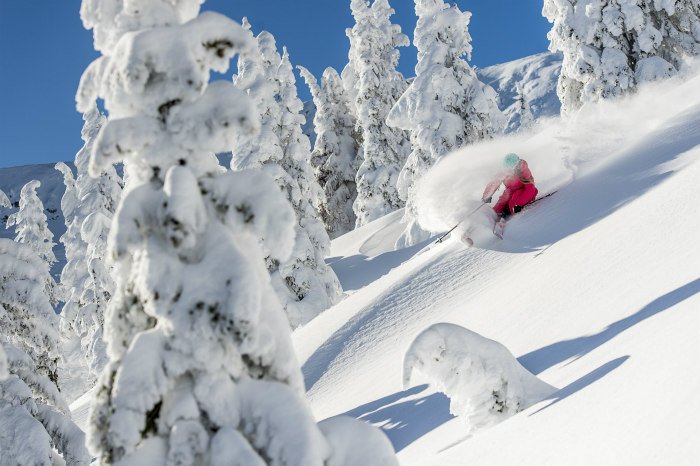 Skiing in B.C. is a unique big mountain experience that adventurers of all skill levels will appreciate — especially when you get to ski through the Okanagan champagne powder that the region is known for, thanks to the region’s heavy precipitation and low humidity.

Big White Ski Resort is just over an hour from the heart of the city. As one of the largest resorts in the province, the terrain at Big White caters to all levels of skiers and snowboarders — from novice to expert. Fly WestJet or Alaska Airlines and you’ll get free ski pass for the day you arrive.

If you’ve got friends or family who aren’t keen on downhill skiing or snowboarding, the resort also offers cross-country ski and snowmobile trails nearby, as well as a tubing park and Canada’s highest outdoor skating rink. 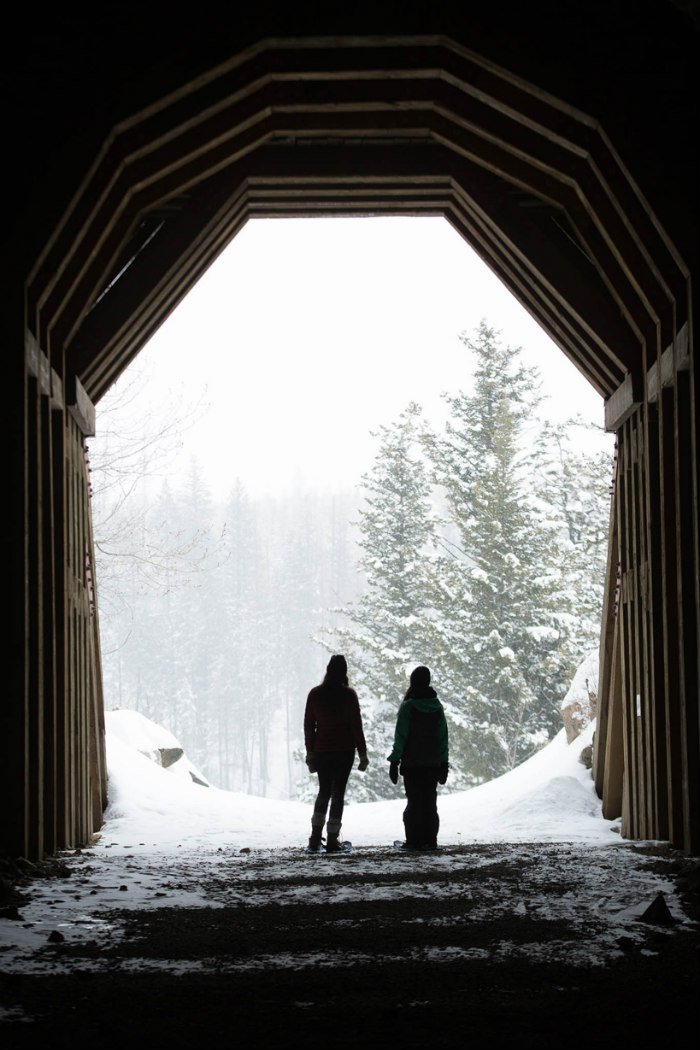 If you’re not familiar with the Kettle Valley Rail Trail, it’s a railroad system turned recreational trail network and the most extensive you’ll find in British Columbia.

Of course, it would be impossible to see the nearly 650 kilometres of interconnected pathways that snake through the province, but a particularly scenic portion of the trail — the Myra Canyon tunnels and trestles — is just 24 kilometres from Kelowna.

Here, the trail runs along a steep-walled canyon that will take you through two tunnels and across 18 trestle bridges for a truly Insta-worthy adventure. We recommend renting a pair of snowshoes to keep you above the snow. 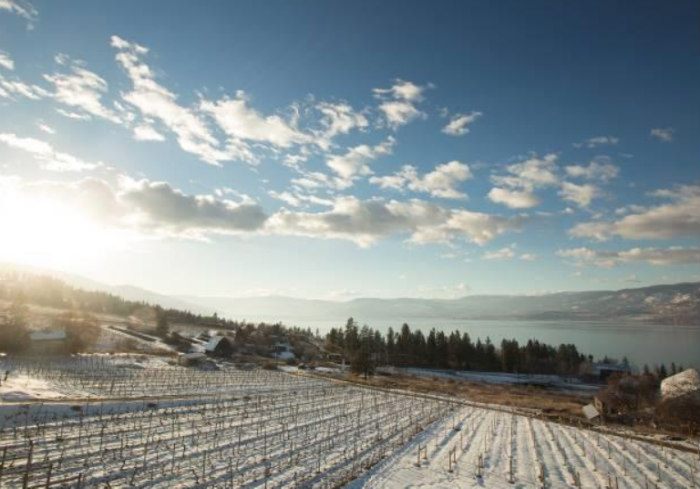 Some of BC’s first vines were planted in Kelowna, and the surrounding area is now home to more than 40 wineries, most of which are open year-round. During the winter months, the cozy tasting rooms are often decked out in festive décor and lights, making visiting them an Insta-worthy experience.

For a strong start, consider Summerhill Pyramid Winery. This certified organic winery produces some of the region’s best icewine, including red and white varietals. You also can’t miss The Vibrant Vine, a quirky winery that offers live music performances throughout the winter. And here’s a hot tip: December is mulled wine month at House of Rose Winery (home to playful wines like Cool Splash and Rose-Eh!), and all proceeds go to the Kelowna Food Bank!

The best way to ensure you get a taste of all that Kelowna’s vines have to offer is by signing up for a winter wine tour. Cheers! Okanagan Tours offers everything from half- to multi-day tour experiences — plus, tours are four for the price of three until March 2019! 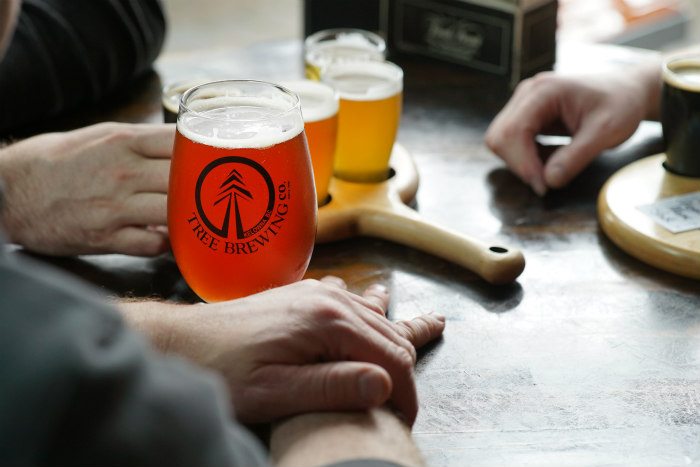 Thanks to the well-established Tree Brewing Co., Kelowna’s craft beer scene dates back more than two decades. But it’s really blown up in recent years, with a surge of new breweries opening nearby, including Vice & Virtue Brewing Co., which has been offering a fair selection of brews and a menu of snacks, shared plates, and smoked meat since opening in the spring of 2018.

BNA Brewing Co. might be our favourite of them all. BNA is named after the building it occupies, which was once home to the British North American Tobacco Company. Today, the space has been renovated into a beautiful combination of old wood and bricks, decorated with an eclectic mix of vintage furniture as well as an indoor bocce court, vintage arcade games, and an airstream trailer. You can even enjoy a round or two of 10-pin bowling upstairs! 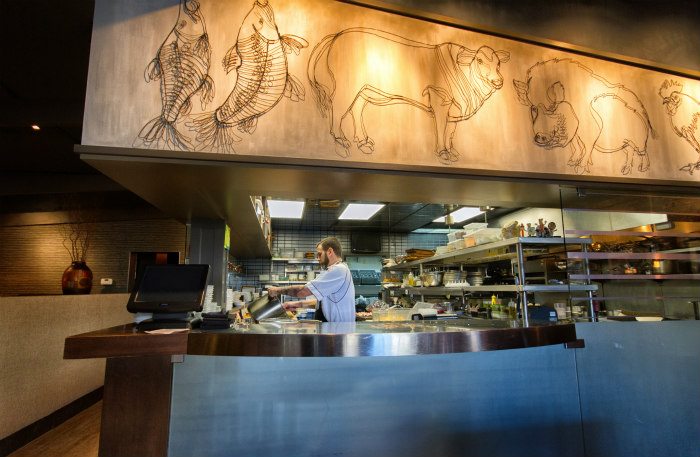 Kelowna has one of the hottest dining scenes in the country, best known for its locally sourced cuisine. If you’re still swooning from your winter wine tour, consider stopping by 50th Parallel Estate Winery’s bustling Block One. This elevated dining experience offers mouth-watering dishes like miso-glazed sablefish that’ll pair perfectly with a day in the vineyards.

For a seriously good Caesar served alongside the best 80s and 90s hip hop, try Krafty Kitchen + Bar. Another stellar brunch spot in the downtown Cultural District is Sunny’s — a new-ish modern diner owned by the same team behind RauDz, who are considered pioneers of the city’s farm-to-table movement. At the end of the night, you can rent a pair of skates and work off your meal with a few laps around the rink in the nearby Stuart Park.

Don’t wait until spring to start thinking about a trip to this lakeside city. With its mild weather, lively food and drink scene, unique outdoor activities, and Okanagan champagne powder, we can’t think of a better way to escape Calgary’s long winters than a trip to Kelowna.