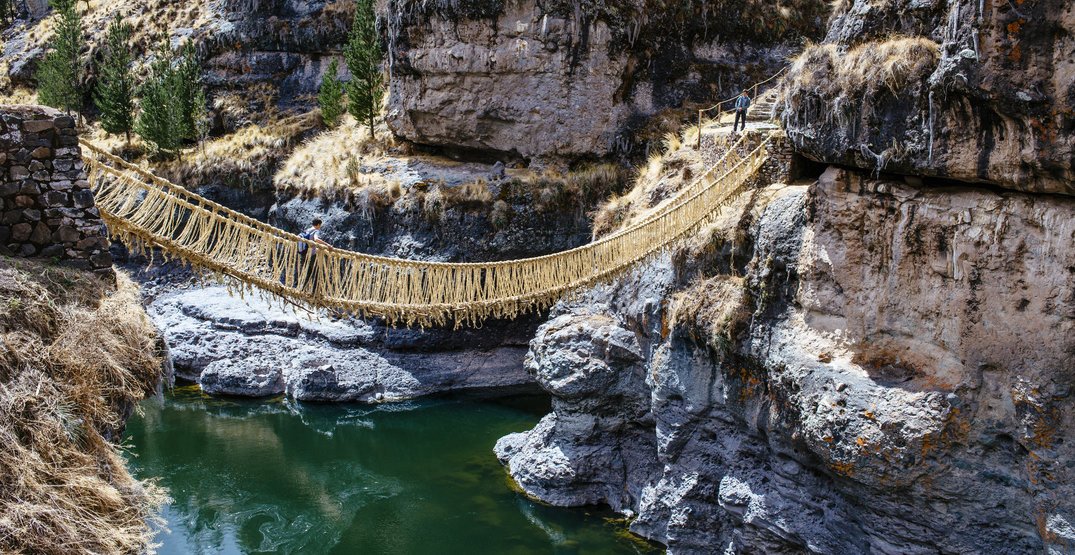 Two young boys walking over a rope bridge in the andes. (Joerg Steber/Shutterstock)

Situated on either side of a gorge high up in the Peruvian Andes, the Q’eswachaka bridge — made entirely of rope — hangs somewhat treacherously over the Apurímac River.

According to National Geographic, every spring, groups of people congregate to take part in a renewal ceremony in which villagers, placed on opposing sides of the river, extend an enormous cord of rope, “more than a hundred feet long and thick as a person’s thigh,” across the old bridge.

The existing bridge is then cut loose and plummets into the gorge below.

Three days of work, prayer, and celebration create a new bridge woven to replace the pre-existing one.

Nat Geo says the Q’eswachaka bridge has undergone this process of renewal consistently for five centuries.

Made of rope fibres — “some as thick as a man’s torso” — bridges like the Q’eswachaka were technological solutions to confront the issue of building roads on rough terrain.

For hundreds of years, the bridge has been the only thing connecting the villages on either side of the river in this specific region of Peru’s Canas Province. It is one of many similar rope suspension bridges constructed during the Inca Empire.

Together, these bridges came to form the Qhapaq Ñan or the Great Inca Road, which is more than 37,250 miles long connecting communities that were once isolated and granting passage to messengers, soldiers, and pedestrians who wished to travel throughout the empire.

According to José Barreiro, assistant director of research and director of the Office for Latin America at the Smithsonian National Museum of the American Indian, the transportation network was created by the Inca and motivated by their intention to “go forth in the world and organize the world after a time of chaos.”

Gradually, over time, some of the bridges were destroyed while others disintegrated and disappeared due to a lack of maintenance. Many fell out of use following the introduction of new bridges and roads to enable car travel in the 20th century.

Most likely a result of its isolated location, the Q’eswachaka bridge remains strong, and the tradition of its restoration has carried on. Today, it connects four Quechua-speaking groups: Chaupibanda, Collana, Choccayhua, and Huinchiri.

Even though a new metal bridge was constructed nearby to enable cars to cross the river, those living around the area still use the old rope bridge to journey across by foot for social purposes and trade.

In 2013, the bridge was added to UNESCO’s Intangible Cultural Heritage Humanity list due to its lasting significance for the people in the region.

According to Barreiro, “You can see the living culture in front of you today that harks back to 500 years ago…As the political empire of the Incas was destroyed, what was left behind was the culture of the people at the village level.”

Since 2015, the Patronato de Cultura Machupicchu (Machu Picchu Culture Trust) has offered lodging services via homestays with local residents. As well, various agencies offer tours of the region, which include visits to the bridge.