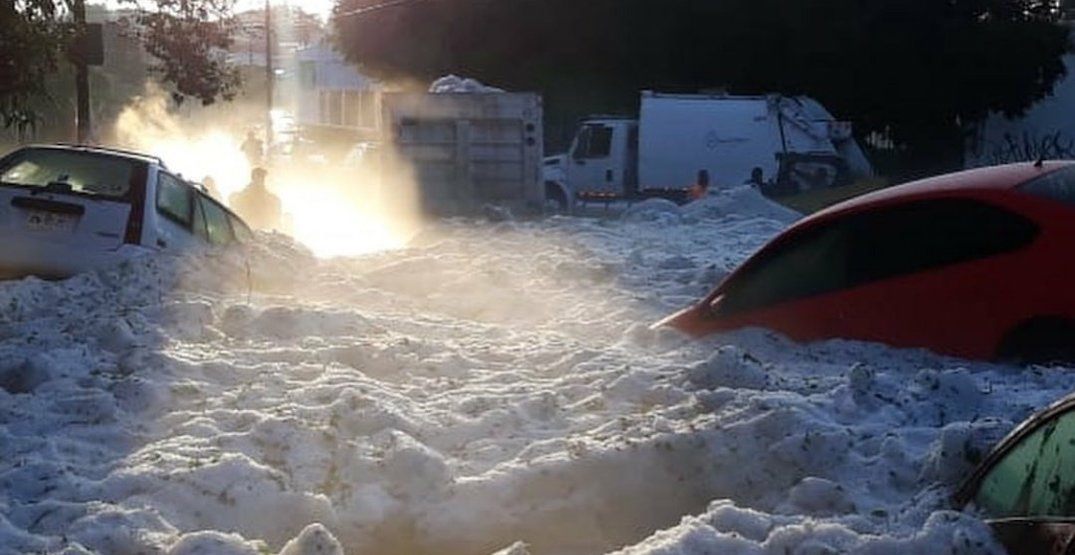 Unprecedented weather patterns have been resulting in strange phenomenon such as snow in Maui to a record-breaking heatwave in Europe. Residents around the globe are encountering scenes that they never thought they would see in their hometown.

Guadalajara, one of Mexico’s most populated cities, just experienced a historic hailstorm with ice up to 1.5 metres (five feet) deep, reports the BBC. By the morning of June 30, a thick layer of hail had covered the streets, rooftops, and even vehicles in at least six neighbourhoods, creating a wintry scene that, based on photos, looks like it belongs more in arctic regions than in Mexico.

Located six hours from Mexico City in the state of Jalisco, Guadalajara sits at an elevation of 5,000 feet. While you may only know the destination from Season Four of Narcos, you should also know that the tropical destination is no stranger to storms.

“Thunderstorms are common from June to September in the city and surrounding area as increasing tropical moisture aids in thunderstorm development across the higher elevations of western Mexico,” said Eric Leister, AccuWeather Meteorologist.

The weekend weather conditions brought an unprecedented amount of hail to the city. Guadalajara was experiencing high temperatures combined with a thunderstorm, which resulted in a hailstorm as well as flash flooding that caused the hail to build up in huge piles.

Jalisco Governor Enrique Alfaro Ramirez tweeted that he had never seen a situation like this before. He added the probing comment, “and then we ask ourselves if climate change exists.”

The governor also shared after the unusual hail in the Metropolitan Area of Guadalajara, mainly in Rancho Blanco and the Industrial Zone, Jalisco Civil Protection personnel attended the situation starting at dawn.

He continued that the government of Jalisco worked with the Mexican Army and municipal authorities of Guadalajara and Tlaquepaque to remove hail from the highway, as well as provide support to citizens who suffered damage to their homes.

No injuries or deaths have been reported from the storms, although reports say that 200 homes have been damaged and dozens of vehicles were swept away or buried.

I got this pictures from #Guadalajara, my hometown in Mexico. Key areas of the city got over 4 inches of hail. It’s the middle of summer and the weather is forecast to reach 80 degrees today. pic.twitter.com/PzCEglc4MH

How do you fancy a toilet hail geyser ??! This was during the severe #hailstorm in #Guadalajara, Mexico this morning 30th of June Photo by 📸 Simcha Nazir via Red Climatica Mundial #severeweather #ExtremeWeather #Mexico pic.twitter.com/vLyNyYU9gE

My dad sent me these photos of Guadalajara , Mexico. 3 feet of hail, he says. Unbelievable! pic.twitter.com/0IinwGvKWB

Here’s a close up of the #hail accumulations in Guadalajara, #Mexico! Unbelievable! pic.twitter.com/JJKg8cpJZD

This is what it looks like this morning in neighborhoods I used to visit frequently in Guadalajara, Mexico after an intense hail storm last night. pic.twitter.com/iGGRBFCIB6