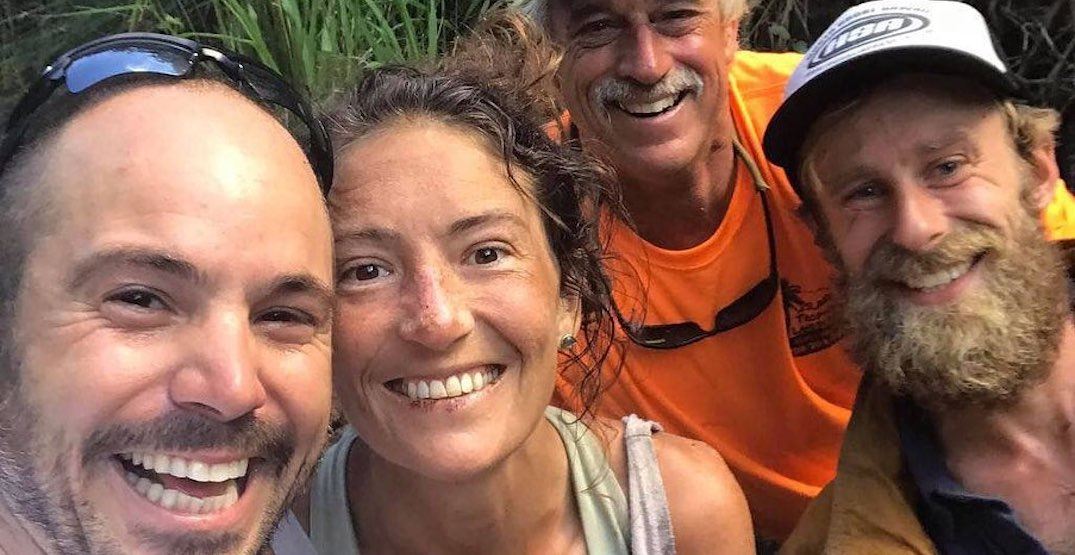 After seventeen horrifying days lost in a forest in Hawaii, Amanda Eller has finally been rescued.

The 35-year-old Maui resident went for a short hike and briefly stepped off the trail to meditate and rest. Unfortunately, she got turned around, marched deeper into the forest, then fell off a cliff and fractured her leg.

Her car was eventually found in the parking lot of the Makawao Forest Reserve, her wallet and cell phone left inside. Hundreds of volunteers began combing through the surrounding forest, searching for her. Her parents also offered a $10,000 reward to whoever brought her back.

Finally, after 17 days, three rescuers found her in a creek bed with waterfalls towering on either side. Javier Cantellops, Chris Berquist, and Troy Helmers searched from a helicopter, operating on a hunch that Eller had been moving faster and further beyond the area they were searching.

They reportedly had five minutes’ worth of fuel left when they spotted her.

“We’re coming up this waterfall and look down and she appears out of the wood. It can only be described as magic. It was the greatest single moment of my life,” Cantellops told Today. They were so excited, the pilot had to tell them to calm down because the helicopter was shaking, CNN describes.

They successfully airlifted Eller to safety with the requisite cheers and fist pumps.

By the time rescuers reached Eller, she had lost 15 pounds and could barely walk. She also had severe sunburns and skin infection. While sleeping in a cave, a flash flood washed her footwear away, forcing her to traverse rocky terrain barefoot for roughly 12 days. Yet, she survived alone for over two weeks by staying close to freshwater sources, eating wild fruit, and sleeping in mud for warmth.

“I heard this voice that said: ‘If you want to live, keep going,’” Amanda Eller told The New York Times.

“And as soon as I would doubt my intuition and try to go another way than where it was telling me, something would stop me, a branch would fall on me, I’d stub my toe or I’d trip. So I was like, ‘OK, there is only one way to go.’”

In addition to her perseverance, her rescuers did not give up. Eller was a yoga instructor and physical therapist. Cantellops had known her for three years, ever since she treated a foot injury. “She has been [to] my home,” he told CNN. “That is why when this happened I got super emotional because she’s been my house and I said ‘I have to find her.'”

“The right people stuck together like Velcro. Nobody ever quit,” Berquist added. Previous military training may have also contributed to their success in the search.

She also thanked the hundreds of other locals who aided in the search. “I’ve never experienced anything like this where the community is showing up with so much freakin’ heart and so much passion, and these guys were not going to give up on me, thank God!”

“She’s doing great. She’s got a little bit of a one step backward, two steps forward situation, but she’s spiritually great. She’s going through a very gruelling process on her legs, where they need to remove the tops of the wounds and it’s very painful, much like a burn victim.

“Physically, she’s gone backward a little bit. She walked out of the hospital, now she’s in a wheelchair, but it’s all part of the healing process, so she’s still moving forward.”

On a Facebook video released Saturday, Eller said, “It did come down to life and death and I had to choose… and I chose life. I wasn’t going to take the easy way out.”