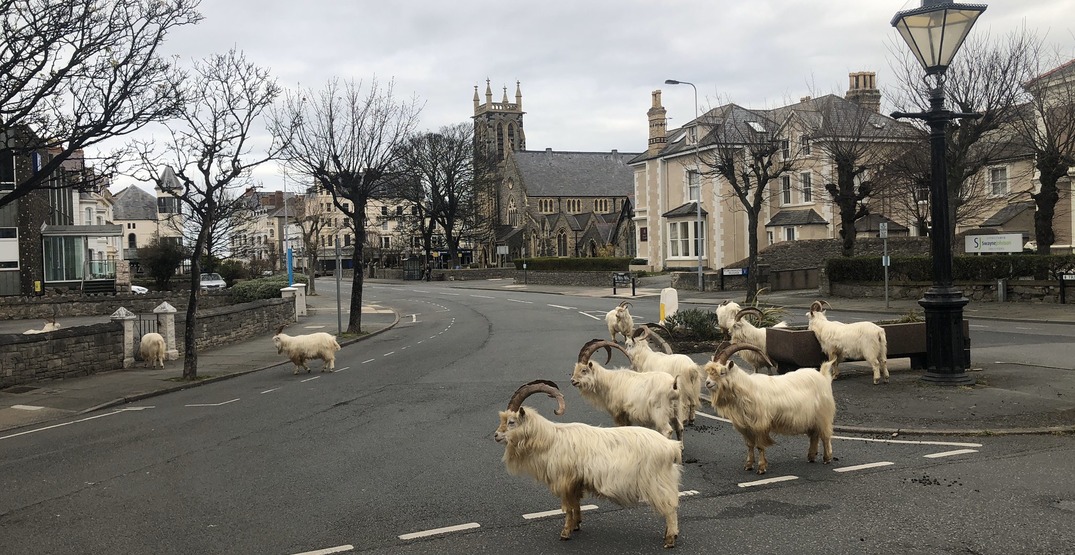 Goats have taken over a small town in Wales.

Andrew Stuart, a journalist for Manchester Evening News, brought his Twitter followers on an epic journey that involves gangs, police, and of course, goats.

Stuart first encountered the group of goats on March 26, when he saw them outside a pub in Llandudno, Wales.

At first, he thought he was seeing things, so he decided to capture them on video.

According to Stuart, the goats then ventured to Trinity Square and sampled the surrounding hedges.

So I decided to see what was going on. They stopped on Trinity Square, and decided the hedges there looked very tasty (tbf, they probably are if you’re a goat 🐐) pic.twitter.com/Sz7WnoQGsd

Unsure of what to do, and concerned by what the goats might do next, Stuart reports contacting the police.

“They were probably going to run riot on the town, what with nobody being about due to the lockdown,” he explained. “I also wasn’t sure if they were keeping the required 2m apart.”

And they sent a patrol car down who turned on the big red lights. So, I’m sorry if the goats got arrested. But they were being very naughty.

Also, close the gates behind you on the Orme.

And stay 2m apart at all times.

After contacting the proper authorities that a “load of kids (geddit?) were running riot,” officers sent a patrol car down to assess the situation.

Two days later on March 28, Stuart captured more video footage of the goats strolling around town, this time, “they’re gathering in groups of more than two,” he explained in a tweet.

Goat update: they’re back, and they’re gathering in groups of more than 2 🐐 pic.twitter.com/Bc2N42SPGo

In the photos and videos that he posts, the goats can be seen running amuck throughout Llandudno, jumping and climbing wherever they please.

He posted again on Monday, March 30, with a video explaining that, “They’re back. Again. And they dgaf.”

In another tweet, he seems to have accepted his new goat overlords.

“They run Llandudno now and we just have to accept that as fact.”

They run Llandudno now and we just have to accept that as fact. Shenkin must be giving them tips from the Royal Welsh. pic.twitter.com/RaABUtWrDa

In later posts, Stuart describes how the goats are afraid of people and typically only come down from the Great Orme —  a limestone peninsula on the north coast of Wales — when it is too windy.

Because of the ongoing lockdown, they have ventured further than they normally would.

This shows what it’s all about. They’re scared of me (a human) in this. They don’t like people. They usually only come down from the Great Orme when it’s windy, and only the back streets at the top of Mostyn Street. Now lockdown means it’s empty, they’re going further than ever. pic.twitter.com/roZpNm61Qh

As of March 31, the goats are still in Llandudno, waltzing around like they own the place.