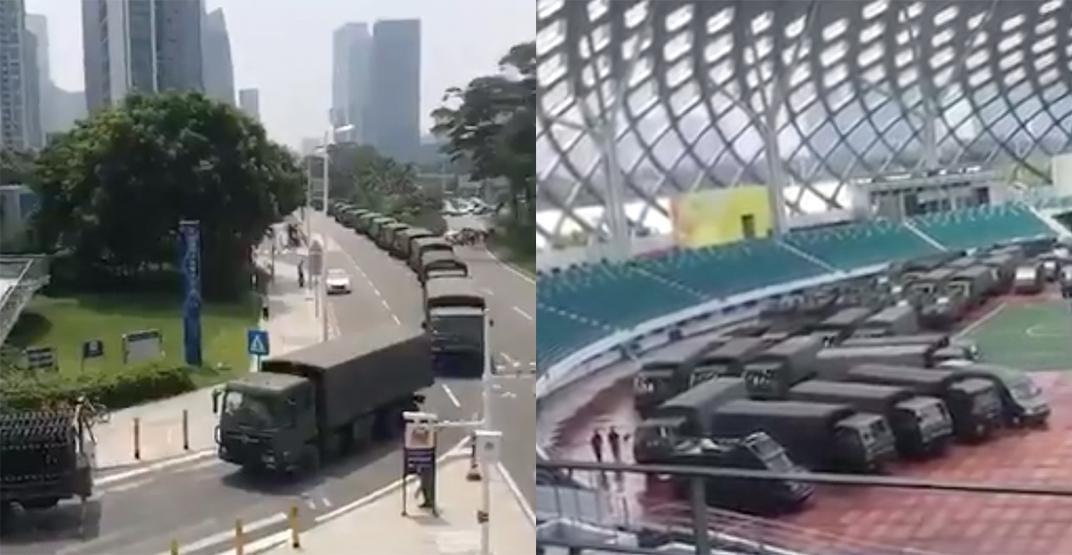 Dozens of People’s Liberation Army (PLA) vehicles appear to have converged in the Mainland Chinese city of Shenzhen, just outside the northern border of Hong Kong.

According to the South China Morning Post, over the weekend, a convoy of armed vehicles and personnel were spotted streaming into a sports centre in Shenzhen’s city centre — about five kilometres away from the border of the autonomous city — in an apparent show of the potential force that could be used to quell the escalating crisis.

Footage on social media shows the extent of the deployment through the streets of Shenzhen, which included military trucks and armoured vehicles.

Disturbing video taken in #Shenzhen just across the boarder with #HongKong. Something extraordinarily bad is about happen. #China #HongKongProtests #Democracy #SaveHongKong pic.twitter.com/Gad5R5HVZL

The Chinese military, believing in the intel and these videos, have set in place a comprehensive military operation targeting the situation in #HongKong. #HongKongProtests #China #Democracy pic.twitter.com/QWFM11XYKC

Overwhelming the number of military cars entering the city of #Shenzhen next to the boarder with #HongKong. #HongKongProtests #China #Democracy pic.twitter.com/jxRwcKrgPU

Communist Party propaganda outlets, People’s Daily and Global Times, claim the amassed military presence outside of Hong Kong is merely for a “drill” and “large-scale exercises.”

“This is part of a complex signalling and an effort to deter the more radical protesters,” Yves Tiberghien, the director emeritus of the University of British Columbia’s Institute of Asian Research and the executive director of the UBC China Council, told Daily Hive.

“But as of now, we are very far from any possible military operation. It is not in the cards and would be incredibly complex to organize.”

This follows anti-riot military drills in Shenzhen in early August, and it is in addition to the PLA garrison in Hong Kong with 6,000 soldiers.

The law of the Hong Kong Special Administrative Region stipulates the city government has the ability to request the Mainland Chinese government to provide assistance by deploying the garrison for incidents of pubic disorder and disaster.

Without a compromise, both sides have been unable to breach their impasse. The movement’s beginnings were centred on widespread opposition to the controversial extradition bill, but its mandate has expanded to entail a number of other demands including an independent inquiry on police brutality in earlier incidents, the resignation of chief executive Carrie Lam, and a full official withdrawal of the bill from the legislative process.

Tensions continue to rise between protesters and police, which has turned the crisis — now approaching its 11th consecutive week — into a battle of wills.

Mass protests in June have now turned into less predictable guerilla-style protests led by more radical groups, closing down major thoroughfares and the subway — bringing much of the global financial centre to a halt — and more recently forcing two days of flight cancellations at Hong Kong International Airport.

“This being said, anger in China, including from ordinary people, toward the few thousand more radical protesters in Hong Kong is rising fast, especially regarding violent tactics and desecration of the flag,” Tiberghien added.

Local media in Hong Kong covering the unrest have also seemingly lost their patience over the city government’s inability to take effective action to end the widespread discontent; in a press conference on Tuesday, one reporter shouted at Lam, saying, “Many in the public ask when you’re going to die?”

Another reporter asked: “Do you still have a conscience?”