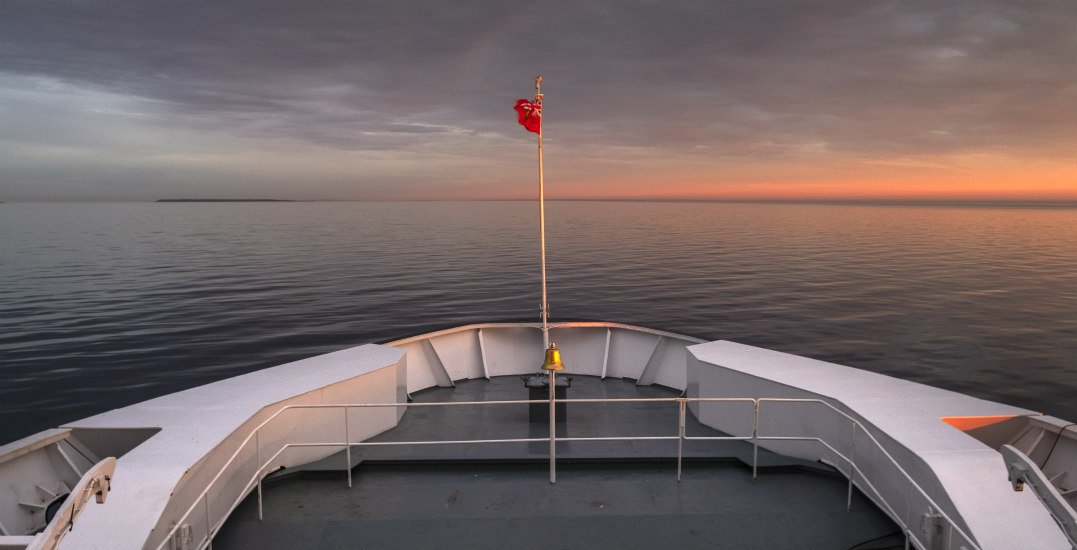 A view over the bow as the MS Chi-Cheemaun sails to Tobermory from Manitoulin Island during a sunset dinner cruise, May 2019.

It’s a foggy morning in Tobermory when the Chi-Cheemaun ferry begins loading for its first trip of the day, across the mouth of Georgian Bay to South Baymouth on Manitoulin Island. There’s everything from motorcycles to tractor trailers parked on the car decks as the ship reverses into the harbour and heads off on the two hour trip across the water to the island. 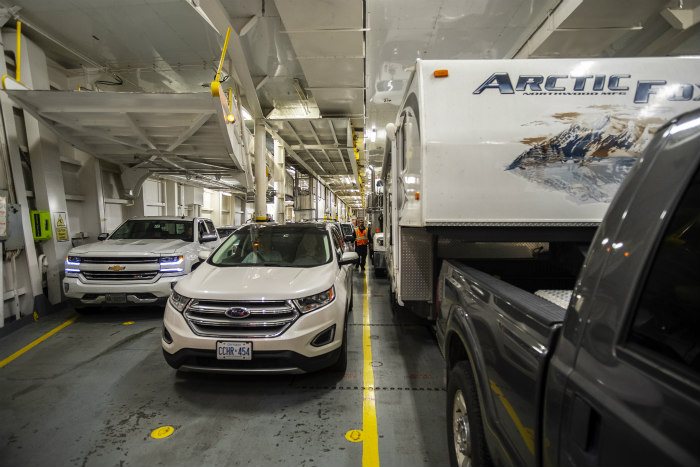 View inside the hold below decks as cars prepare to drive off the MS Chi-Cheemaun ferry as it docks in Tobermory. // Rick McGinnis

In the ship’s cafeteria Owen and Shirley Legge are enjoying the trip, even if the view outside – usually islands passing by under huge skies – is obscured by a thick fog. They live on Manitoulin, owners of a Chrysler dealership on the mainland that their son runs now. They’ve been visiting friends in Chatsworth and are on their way home, one of the ten or so trips they take on the ferry every year.

“It’s relaxing,” they say, looking around the cafeteria, full of neighbours and truckers and tourists heading to the island on Memorial Day weekend. “It’s a break in the driving and it’s a nice atmosphere,” says Owen. 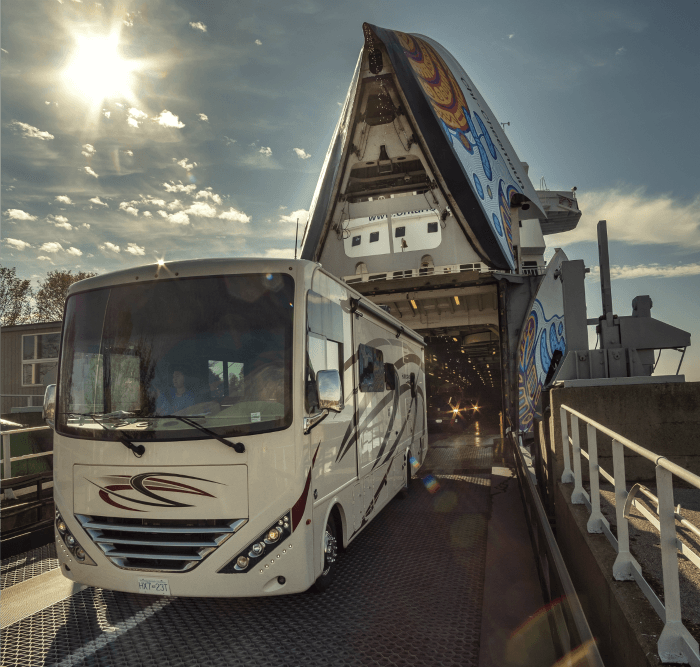 View of coach preparing to load onto the MS Chi-Cheemaun ferry. // Rick McGinnis

The Legges are the regulars who ride the Chi-Cheemaun when it sails from May to October – the sort of people who’ve been taking the ferry between Tobermory and Manitoulin since it began service in the ‘20s, and long before the Chi-Cheemaun started sailing. They recognize all the other regulars, and talk about how important the boat is for business on Manitoulin. And they’re friends with crew members, like steward May Bowerman, who’s working the cafeteria this morning.

“The staff,” the Legges tell me, “are very good. That little bit of friendliness goes a long ways.”

It’s quiet in the Boatique – the Chi-Cheemaun’s gift shop – but it won’t be once the season starts in June. The shelves and racks are packed with things. Max Hann, one of two Chief Stewards on the ship, shows me all the essentials that any cottage country gift shop will carry – batteries, playing cards, candy bars, toys and jigsaw puzzles that he tells me they inevitably sell out of every summer.

There are books – musician Tom Wilson’s gritty memoir, in hardcover, holds a prominent place – as well as CDs (Perth-based folk singer James Keelaghan is on display) and a DVD about this history of the ferry called “The Motorist’s Shortcut.”

And then there are souvenirs: caps, toques, postcards, mugs, fridge magnets, fishing lures, stickers and racks of t-shirts and hoodies with the ferry’s logo and slogan (“Travel in Good Spirits”). One particular blue and grey hoodie is a big seller; Max says they have to re-order it at least once every summer. 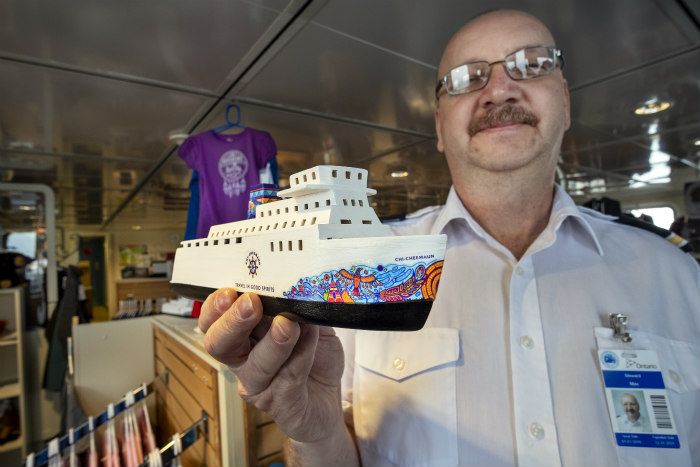 Max Hann, steward on the MS Chi-Cheemaun, shows off one of the best-selling items in the ferry’s “Boatique” gift shop – a wooden model of the ship. // Rick McGinnis

There’s a cabinet full of beadwork and other handicrafts made by Ojibwe craftspeople on Manitoulin – a big hit with European tourists. And then there’s the boat – wooden models of the Chi-Cheeman (the name means “Big Canoe”) in two sizes, a big hit with both kids and ship fanatics and also on re-order for the summer.

It’s proof of the iconic status of the ferry, which was enhanced when colourful artwork inspired by aboriginal woodland artists like Norval Morrisseau was splashed over the bow and funnel of the ship a few years ago.

In the ferry’s Information Centre upstairs, Jacqueline Odjig is straightening pamphlets for lodgings and attractions in Tobermory and Manitoulin while standing behind a big scale model of the Chi-Cheemaun. She says that the question she gets asked most of all is what the name of the boat means. After that, it’s European tourists asking about life in the Ojibwe community on the island. 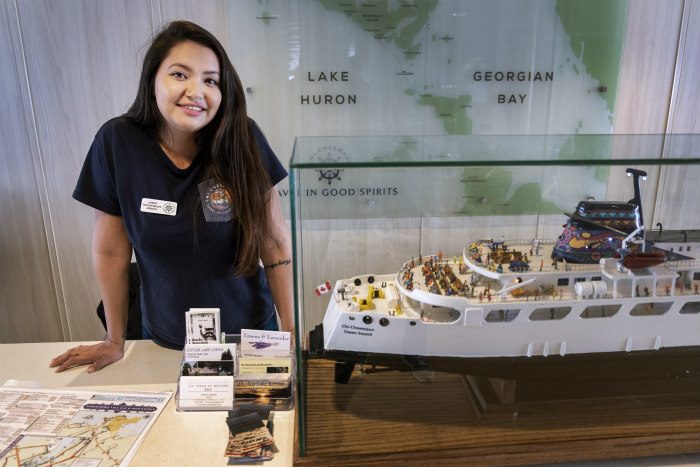 Jacqueline Odjig from Manitoulin Island works the Information Desk on the MS Chi-Cheemaun during the ferry’s trips across Georgian Bay between Tobermory and South Baymouth. // Rick McGinnis

She tells me about visitors whose stories stuck in her memory, like the couple from New Zealand who were traveling around the world. The ferry hosts people from all over the globe – North America and Europe but also China and other parts of Asia. The most interesting stories, though, come from people for whom a trip on the Chi-Cheemaun was “just one part of a longer route.”

In the art gallery in the lounge upstairs, photographer Willy Waterton’s portraits of locals from the Bruce and Manitoulin, shot on film in the ‘80s and ‘90s, are hanging for the season. There are farmers and lighthouse keepers and a former sailor who lived aboard ships frozen into the harbour over the winter.

They were part of a show he did at the Tom Thomson Gallery in Owen Sound, who provide local artwork for the ferry’s art gallery every year, and he’ll drop in every couple of months to switch out a few portraits with new ones from the show. It’s part of the ferry’s mission to showcase the history and culture of the region, and he’s flattered to be there. “They thought it was a good fit.” 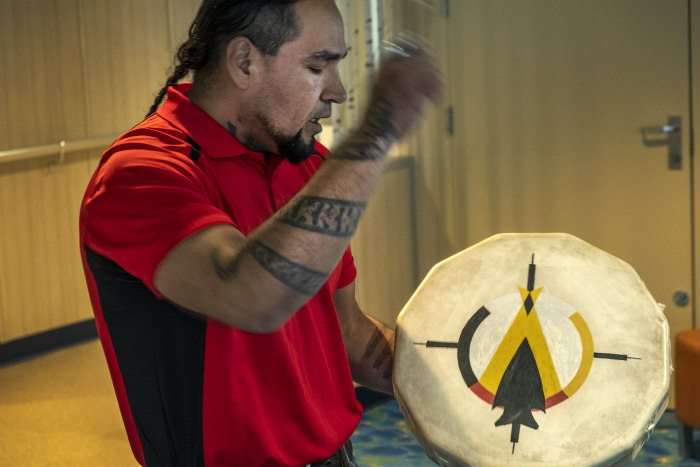 Waterton’s own history with the ferry goes back a long way. He worked on the Norisle, the Chi-Cheemaun’s predecessor, during its last season in 1973, and then on the Chi-Cheemaun’s first season the following year. He remembers a wall of green water breaking over the bow during a storm when he was outside taking a break, “when everyone learned that it’s a very seaworthy ship.”