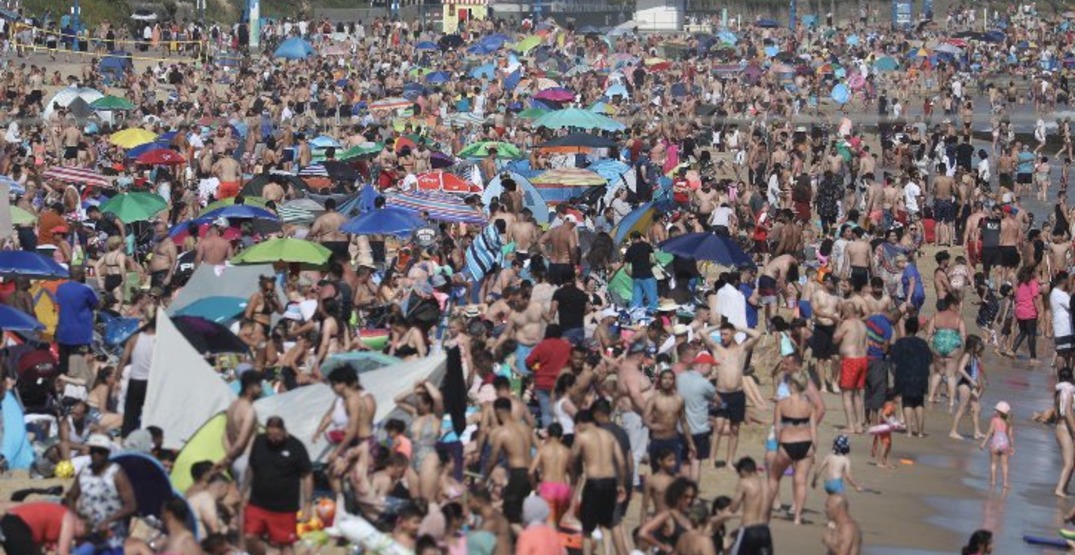 Crowds of thousands flocked to the beaches of Bournemouth, Christchurch, and Poole in Dorset County in southern England last week, much to the shock and dismay of British officials who are blown away by the sheer number of people blatantly disregarding COVID-19 protocols and restrictions.

The region has been experiencing a heatwave recently, and Thursday, June 25, saw the highest temperatures of the year so far, surpassing 30°C and prompting hoards of people to venture to the beach.

“We are absolutely appalled at the scenes witnessed on our beaches, particularly at Bournemouth and Sandbanks, in the last 24-48 hours,” Vikki Slade, Council Leader of the Bournemouth, Christchurch and Poole Council (BCP), stated in a press release issued on Thursday, June 25. “The irresponsible behaviour and actions of so many people is just shocking, and our services are stretched to the absolute hilt trying to keep everyone safe.”

Slade continues that she had no other option than to issue a “multi-agency emergency response” to organize resources and organizations within the region to assist in rectifying the various issues presented. She describes that local resources were entirely overwhelmed by the massive influx in visitors which led to the creation of a multitude of problems, including illegal parking, criminal behaviour, excessive waste, heavily congested roads, and banned overnight camping. There was also a severe lack of physical distancing due to the sheer number of people present.

As well, when attempting to clean the beaches and empty overflowing garbage cans, crews were met with “abuse and intimidation,” and multiple incidents of excessive alcohol consumptions and fights were also cited.

“The numbers of people descending down here are like those seen on a bank holiday,” Slade continued. “We are not in a position to welcome visitors in these numbers now or to deal with the full range of problems associated with managing volumes of people like this. PLEASE do not come.”

MP Tobias Ellwood of Bournemouth East issued a tweet on June 25 requesting that the Police Minister send additional police forces should Dorset request it. He continued that “half a million people” were visiting the area, causing the beaches to be full and roads to be “gridlocked, hindering emergency vehicles.”

Luckily, residents — at least those living locally — seem to have heard the message, and authorities thanked the communities on Friday for their support and for listening to the requests to refrain from visiting the area.

“Local people have been brilliant, and I would like to pass on my sincere thanks to them for listening and obeying the warnings issued,” Slade stated in a press release. “This is about outside visitors coming into the area in their thousands and refusing to take responsibility for their actions.”

On Thursday, June 25, the BCP Council issued 993 penalties for cars parked illegally, collected over 50 tonnes of waste from the beaches and surrounding areas in only one day, increased security patrols, placed additional staff at parking lot entrances, and increased the numbers and extended the hours of civil enforcement officers. It also continued to warn the public of the “major incident” that occurred last week through digital signage on roads leading up to the area indicating that it is at capacity.

Slade continues that the area will not reopen to visitors in large numbers until lockdown measures are eased.

In a statement issued on Tuesday, June 23, Prime Minister Boris Johnson stated that beginning Saturday, July 4, physical distancing measures would be eased, allowing residents to move to a new “one metre plus” rule when it is not possible to maintain the standard two metres apart.

As well, he described, starting July 4, families will be able to meet with one other household at a time, which includes permission for overnight visits. “This can be indoors or outside, at your home, in a restaurant or pub, or in paid accommodation,” he explained.

Here are some images that others have captured of the massive beach crowds:

Seaside is an anagram of the word Disease #Bournemouth pic.twitter.com/t9osG3UqMr

There has been lots of posts that the 30+ tonnes of waste left on Bournemouth beach was caused by single use items. No it was caused by PEOPLE. #KeepBritainTidy #Recycle pic.twitter.com/Jk3A5Bk5AF

Coming through loud and proud Morris, if you get chance pop down to Bournemouth 👍🏻 pic.twitter.com/5WTKNrqKRc