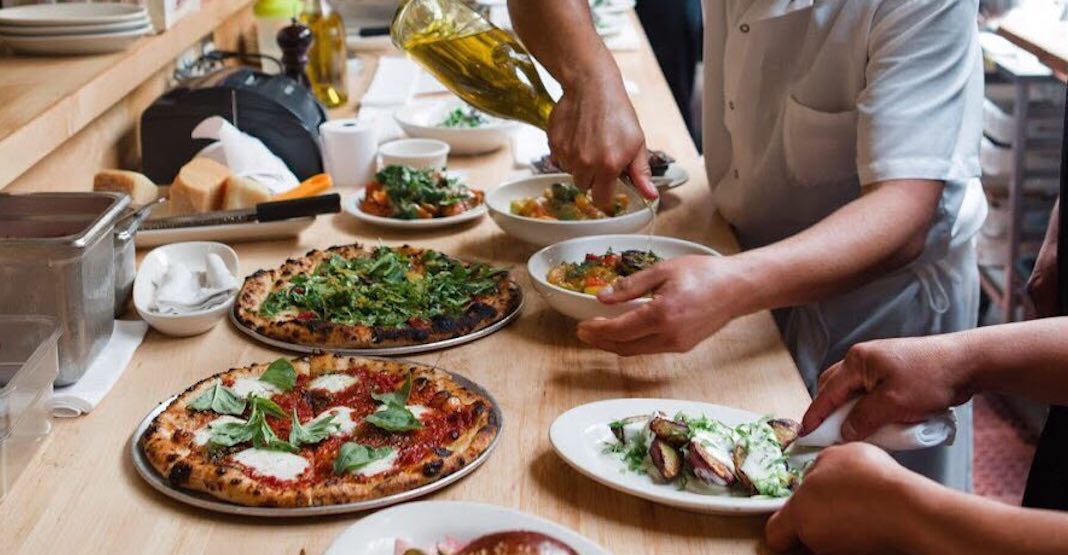 Los Angeles is not only a city made up of many different neighbourhoods, but many different cultures as well. And how to best get a taste for these cultures? Through the food, of course!

LA’s traffic may make it a bit difficult to make your dinner reso on time, but don’t let the gridlock get you down. Eyes on the prize, people – the prize being, of course, delicious food.

Here are some of the best places to eat your way through Los Angeles.

Home to the largest seafood restaurant in all of California, San Pedro Fish Market can seat nearly 3,000 people. But if you want to get your hands on its infamous shrimp tray you’ll have to get there early, because when the cruise ships pass through the Port of Los Angeles, seats fill up very quickly.

This spot will serve you up a refreshing cold brew for your on-the-go caffeine fix. It also has a killer outdoor patio with ultra comfy cushions if you’re looking to bang out some emails. While you’re at it, try out their Featured Toast – a unique take on traditional avo toast – with all of the cheese.

A post shared by The Butcher’s Daughter (@thebutchersdaughter_official) on Sep 20, 2018 at 3:08pm PDT

With outposts popping up in New York City and LA, The Butcher’s Daughter has become a hit because of their plant-based menu (and, let’s not kid ourselves, the Insta-worthy decor). They hilariously describe themselves as a “vegetable slaughterhouse” as they chop, filet and carve each veggie to perfection. 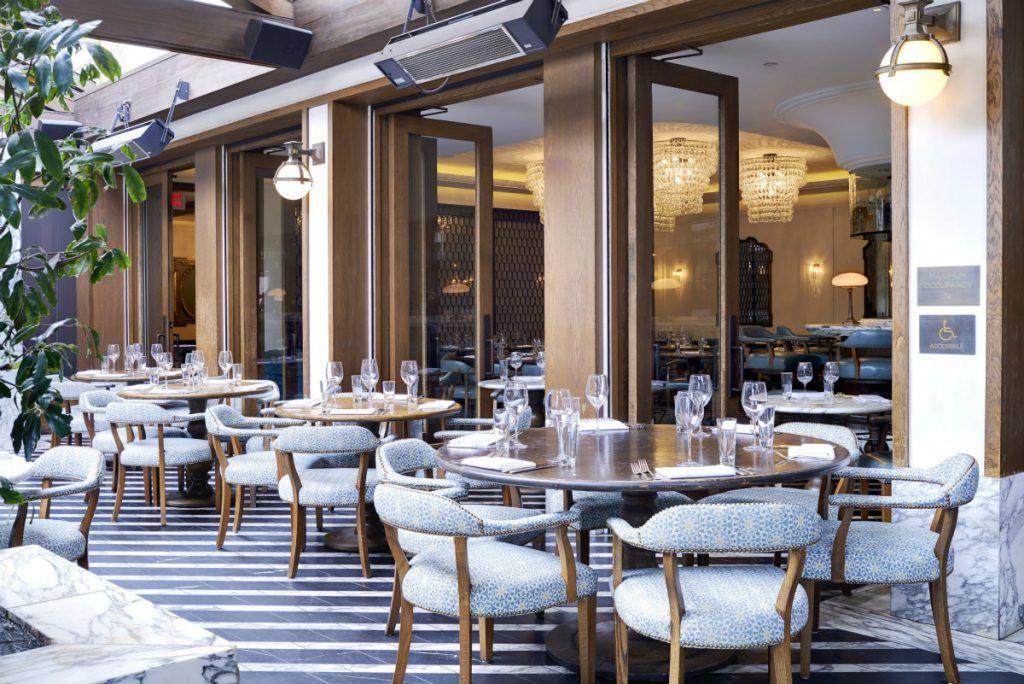 Cecconi’s has become a staple all around the world for creating standout Italian fare. With each spot known for their standout decor and beautiful outdoor space, their West Hollywood location is no exception.

Come here for celebrity sightings, a healthy (yet delicious) morning dish, fresh juices and endless coffee. Not to mention the incredible indoor/outdoor space. You can thank us later.

Something for everyone: The Henry 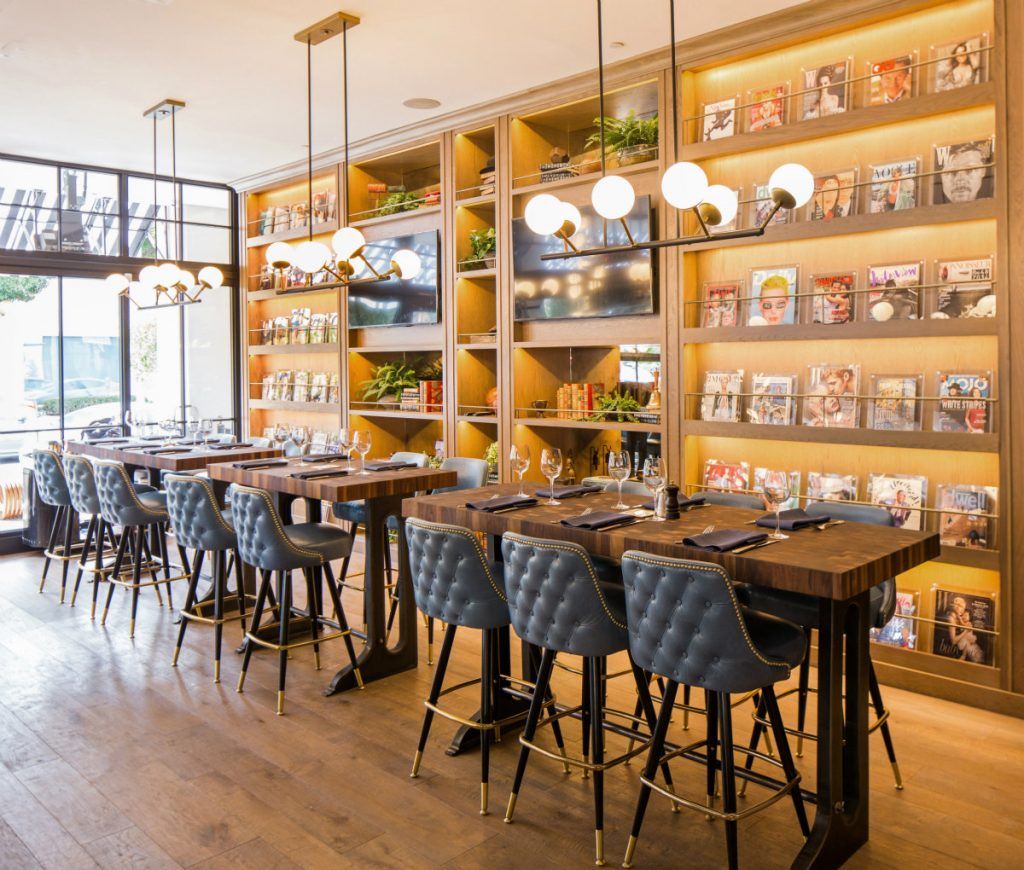 The Henry/West Hollywood Travel & Tourism Board

Looking for an upscale, but a casual option that appeals to a variety of people? Look no further, because this fare will feed the vegan to the carnivore and everyone in between. The dishes are delicious, the tables large, and the interior elegant. Oh, and the patio is dog-friendly.

Local tip: West Hollywood is the number one dog-friendly city in North America. They can come with you just about everywhere, so feel free to bring your pup.

Top Chef Canada judge Janet Zuccarini is known in Toronto for her work on hotspots like Gusto 101 and Chubby’s, and has now teamed up with Evan Funke to bring her culinary roots to California. Each dish is created with locally grown ingredients to bring the best of Italy to Abbot Kinney.

Arguably some of the best tacos served north of the Mexican border are right here in Los Angeles. Guerilla Tacos is known for serving seasonal menus from local vendors and a rotating selection of tasting dishes making everytime you go a new experience. 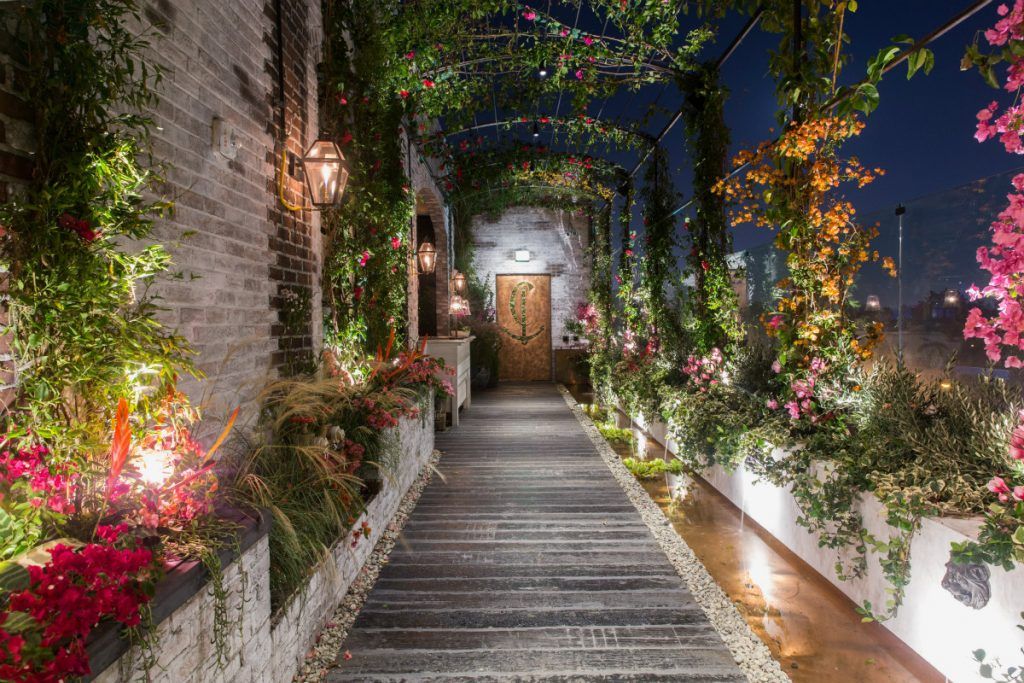 The moment you step out of the rooftop elevator onto the magical flower and vine-covered platform, you’ll realize why this is a local favourite. And if you love sushi like we do, you’ll want to order everything on the menu.

These dishes are made for sharing, so come all and come hungry because you can’t go wrong with any option. We recommend ordering the MRC Roll – they sear it at your table! They also have plenty of vegan and vegetarian dishes for those of you not into seafood.

Okay let’s be real, every place on Abbot Kinney is trendy and tasty, so of course Gjelina (pronounced Jel-eena) is no exception. Come here for delectable gourmet pizzas, a dimly lit rustic atmosphere, and communal plates and seating. There’s also a takeaway outpost next door to grab a slice if you’re on the go.

One lovely part of LA is that the weather is temperate all year long, meaning a garden patio is always welcoming you with open arms. Firefly presents an intimate atmosphere, serving elevated dishes made with familiar ingredients.  If you can, try and reserve one of their outdoor booths that are the perfect intimate setting for date-night or to pop the question while on vacay (hint! hint!).

One of the oldest restaurants in Hollywood, Musso & Frank Grill has had some of the biggest stars over the last 90+ years stroll through their doors. The menu is the same since they first opened in 1924, serving up killer martinis, seafood cocktails, steaks, chops and retro dishes in the same classic way. Can’t you imagine Frank Sinatra dining here? 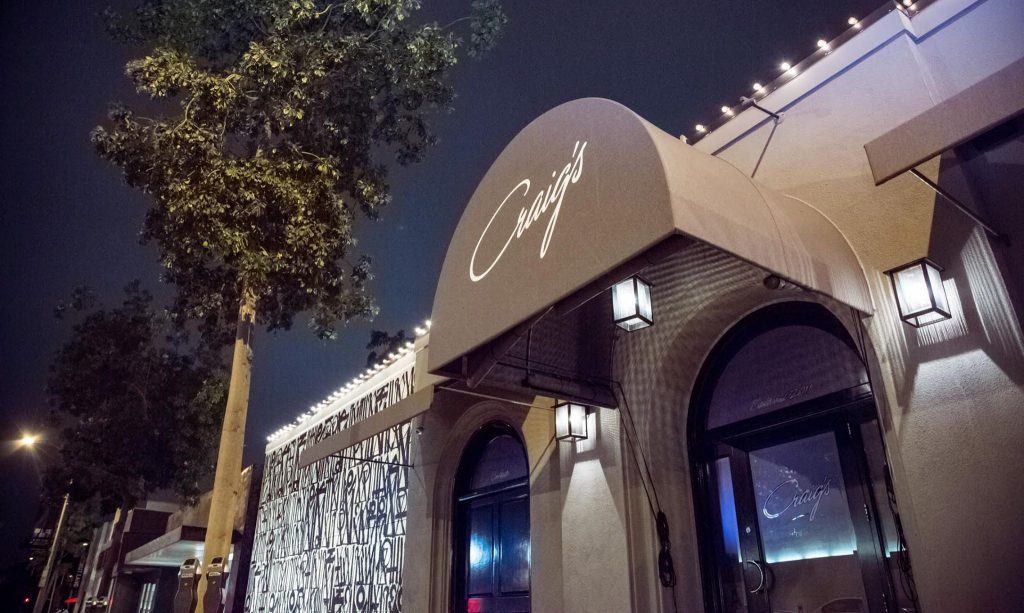 Aside from the small group of paparazzi waiting on any given evening, the outside of this restaurant is actually very unassuming. Known for its comfort food and relaxed atmosphere, Craig’s is a celebrity favourite. So if you’re in the mood for spotting a star, grab a drink at the bar and act natural because the odds are in your favour.

Only a short drive away from Griffith Park, Little Dom’s is a neighbourhood favourite and it’s rumoured that Ryan Gosling has been seen dining here. Do we even need to go on? … Okay, we will. This cozy Italian joint is best known for their fixed-price Monday supper, busy brunches and comfort food dishes.

Make sure to check out their deli beside the main restaurant, which is the perfect spot to pick up a scone and a sandwich before going on your hike to the Griffith Observatory.

Outdoor atmosphere: Boxwood On the Roof at the London West Hollywood 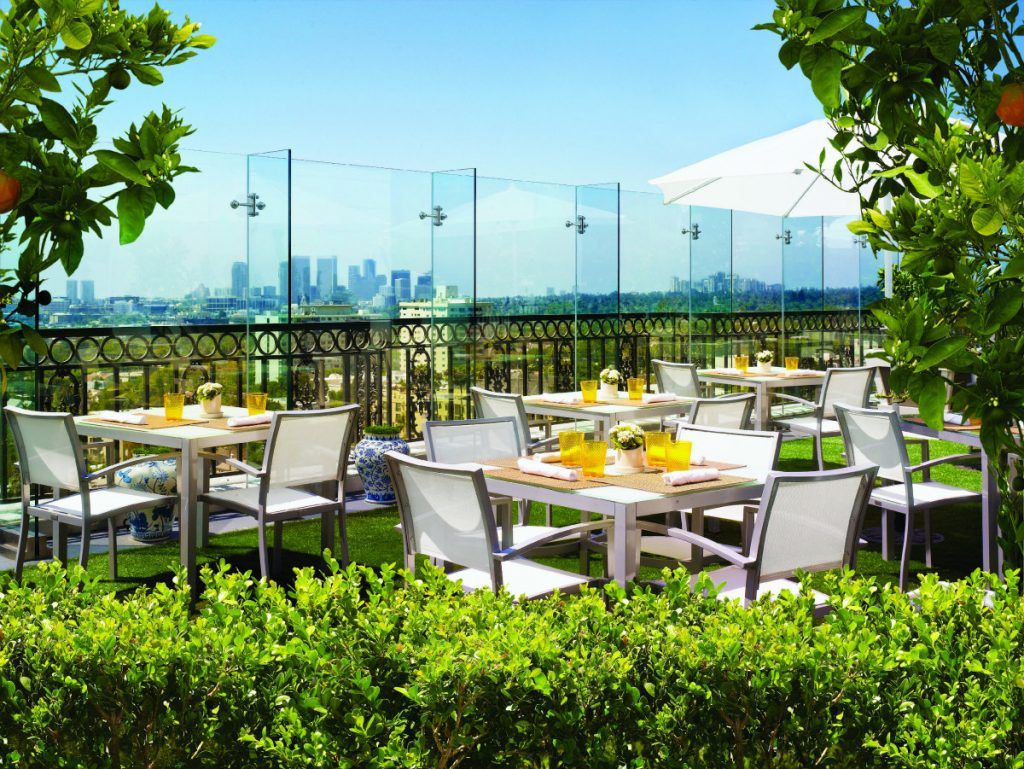 Boxwood on the Roof/West Hollywood Travel & Tourism Board

You won’t believe the views at Boxwood on the Roof in West Hollywood. Oh, did we mention it’s a rooftop pool lounge? It really doesn’t get much better than this. Open for brunch, lunch and dinner, you’ll have to stop by more than once just to see how the view changes based on the time of day.

For a pleasant and delicious surprise, try the Peanut Butter and Jelly smoothie. If you didn’t know any better, you would think it was the real thing.

Name 2018 Food & Wine Restaurant of the Year, Lasa is a Filipino-inspired but Californian influenced restaurant owned and operated by second-generation Filipino-American brothers, Chad and Chase Valencia. With a modern take on classic Filipino dishes, each item shows their love for their heritage and its cooking tradition.

If there’s one thing Los Angeles does well it is delicious, vegetarian food. And Gracias Madre’s plant-based tacos and ceviches are no exception. Chef Chandra Gilbert creates bold favours with seasonal produce to make dishes inspired by the kitchens of Mexico. Even if you’re not a vegetarian, it is worth the visit to Gracias Madre just for the beautiful patio space and incredible eats.

From A-listers to the everyday LA local, the line for Urth Caffé is always streaming out the door because it’s somewhere that everyone loves. Best known for their organic coffee, Urth Caffé’s menu boasts a never-ending list of dishes made with fresh ingredients and indulgent baked goods. 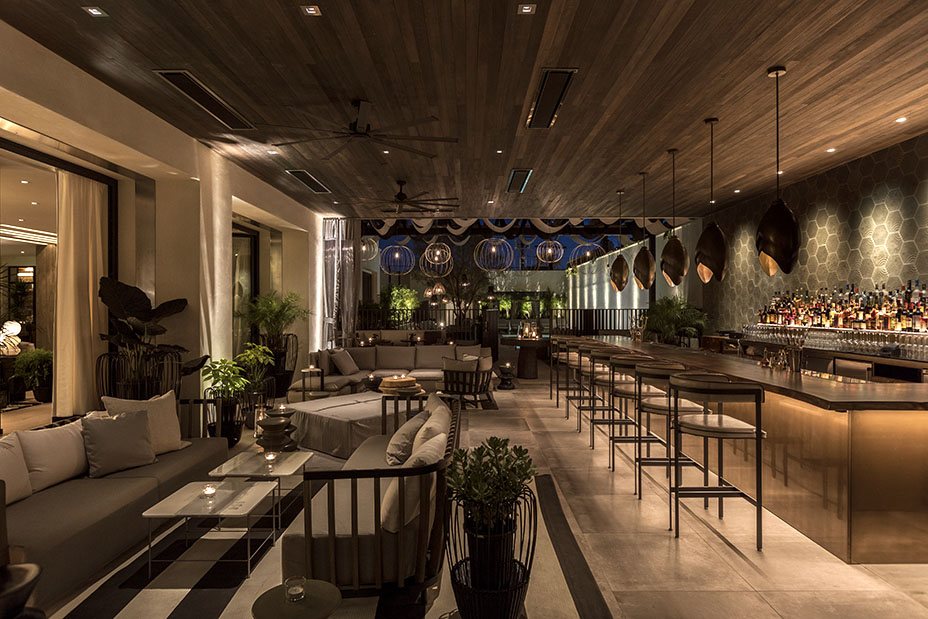 Two words: Burrata Pizza. It’s delish but also massive, so we recommend bringing a friend or three to share. The stylish decor transforms into a casual bar scene so hang around and grab yourself one of their refreshing spirit cocktails – they also do their own version of an Aperol Spritz. Yup.

Local tip: Pop over to La Peer Hotel’s poolside bar (same location as Viale) for some casual lounging. On Thursdays, they have live music and it’s definitely worth checking out.

Disclaimer: Travel, accommodation, and meals were provided to Mapped by the West Hollywood Travel and Tourism board. All views and opinions are those of the author.

Want to contribute to Mapped by sharing your favourite places to dine in your own city? Contact us at [email protected].