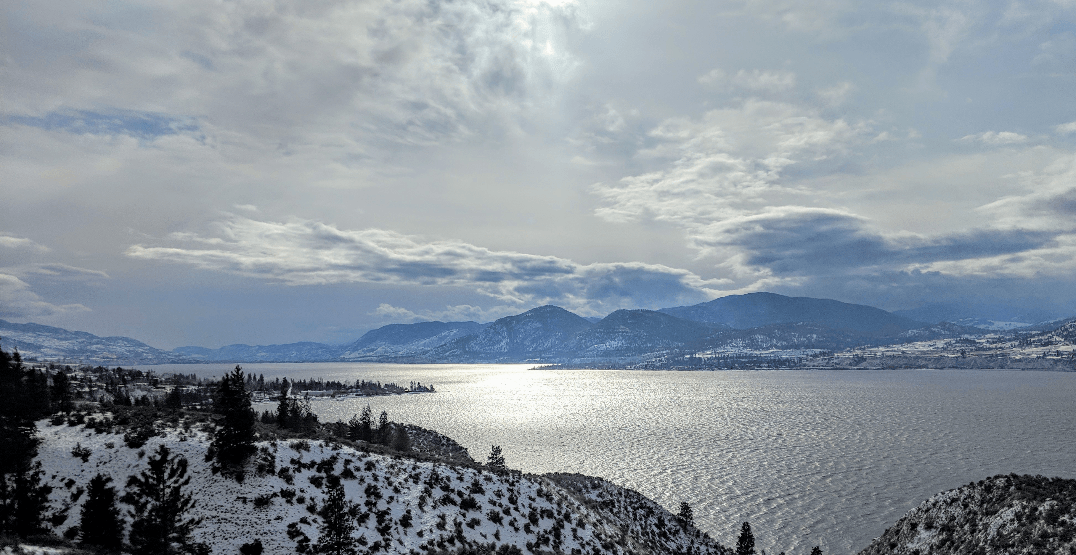 With a mix of sun and snow during the winter, Penticton enjoys views like this. (Eric Zimmer / Daily Hive)

Situated between two different lakes in BC’s Okanagan region, Penticton has long been a hot spot for summer sun seekers.

And while it comes by this reputation honestly, the city of just over 33,000 residents has plenty to offer for winter visitors as well.

Located a 50-minute flight – or approximately four-hour drive – from Vancouver, here’s why Penticton makes for an ideal getaway during the snowier months. 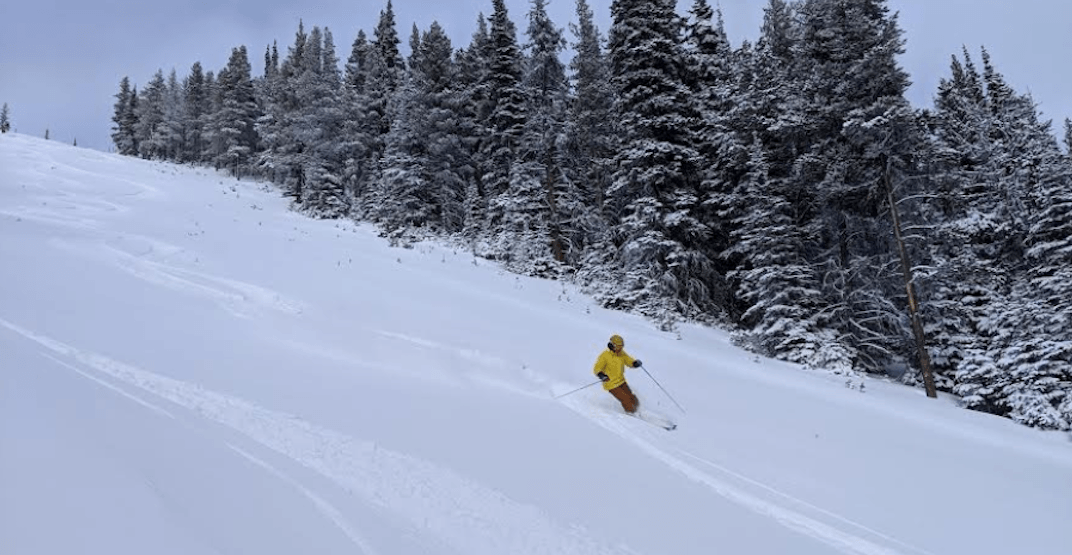 The Okanagan is known for its dry, “champagne” snow, and it goes without saying that you don’t have to travel far to find it around here, especially at Apex Mountain Resort.

Situated on the west side of Okanagan Lake, just a 40-minute drive from town, Apex offers an array of terrain that caters to all rider types and abilities. The mountain’s one main quad chairlift provides access to all areas of the mountain, and is complemented by a triple chair, a t-bar, and a magic carpet for beginners. With 2,000+ feet of vertical, 79 marked runs, four terrain parks, a seemingly perfect mix of sun and snow, and an average lift-line wait time of two minutes, there is certainly more to this mountain than meets the eye.

The resort village itself has maintained a decidedly mellow vibe, keeping the majority of its focus on skiing and snowboarding. That said, there is also a one-kilometre outdoor skating loop, tube park, and cross-country skiing trails available for those looking for something different. And while winter sports are the core of its existence, Apex was recently purchased by new owners who have big future plans to turn it into a full-fledged, four-season destination.

The outdoors in general 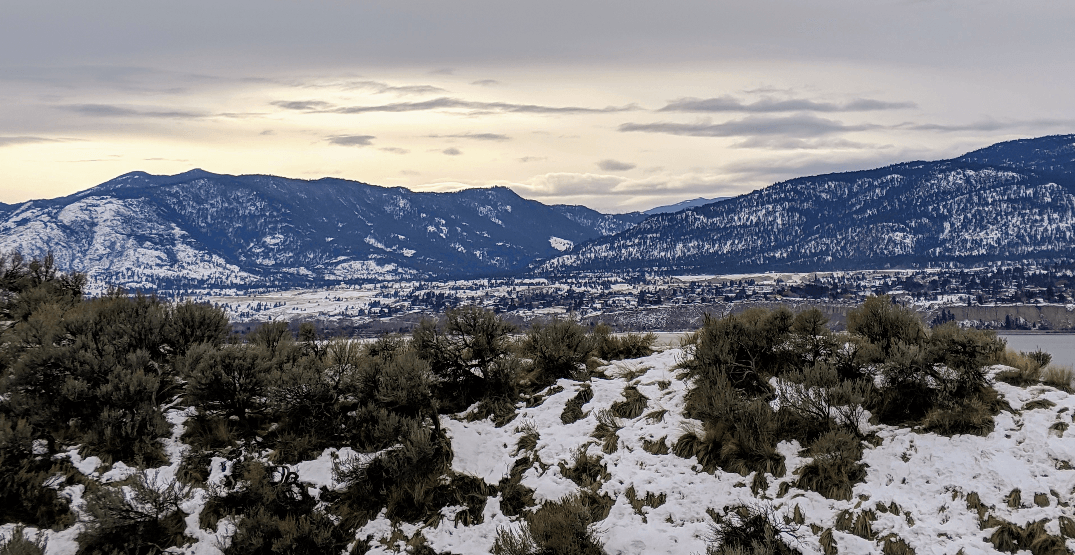 Flanked by mountains and rolling hills on all sides, Penticton is an outdoor enthusiast’s dream, and nature is never far away.

During the winter months, outdoor pursuits take on a slightly different form – although it’s easy to see the connection to their summer counterparts.

Take, for example, fat biking in the snow. Yes, the Okanagan does offer seemingly limitless locations to ride a bike during the summer, but just because there’s snow on the ground doesn’t mean this has to stop. Fat biking refers to the tires used on the bikes to provide better traction and floatation in deeper snow, and even if you don’t have a fat bike of your own, renting one for an outing is a breeze and numerous options are available at local businesses such as Freedom Bike Shop. 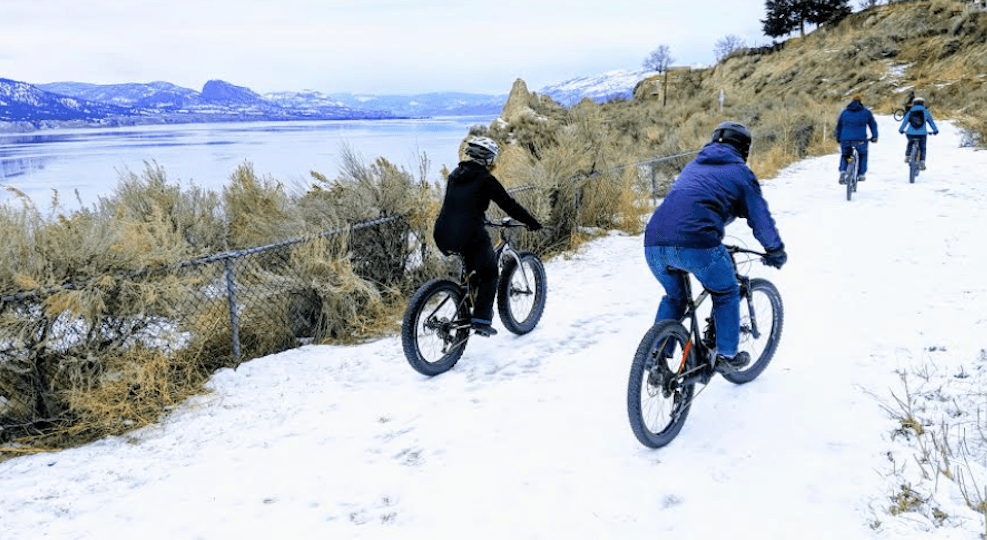 Of course, if you’re looking to get outside, but at a somewhat slower pace, you can always go snowshoeing.

The expansive network of outdoor trails in the region lends itself to seemingly limitless opportunities to explore the area during the winter as well. For those without their own set, snowshoes can be rented from the various outdoor shops in town. 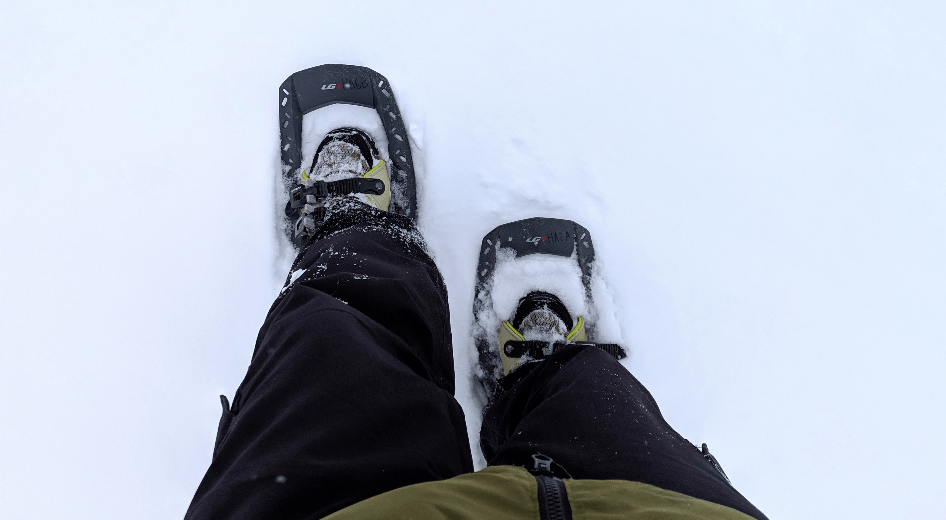 Snowshoeing in the mountains around Penticton. (Eric Zimmer / Daily Hive)

Looking to really tap into a “true north” experience? Why not give ice fishing a go? Yes, this is exactly what it sounds like and as various mountain lakes in the region freeze over, there’s always good opportunity to give the sport a try. If it’s your first time, it’s best to tap the knowledge of a local guide who will advise on when and where it’s safe to go, and exactly the type of gear you’ll need to bring. 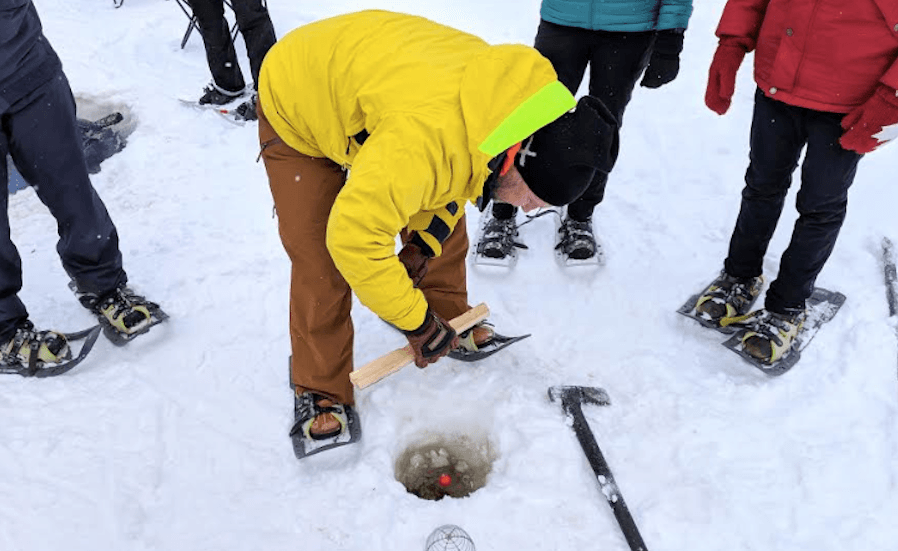 You’ve already come this far, why not go a little further – specifically to visit a remote and rustic mountain lodge, deep in the woods, but still close to town? 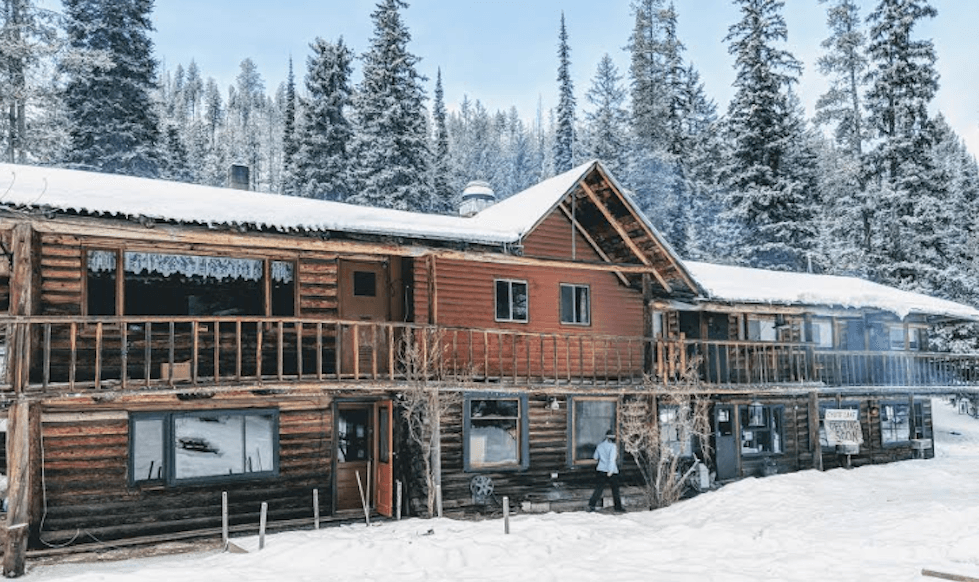 It’s only about a 45-minute drive from Penticton, but Chute Lake Lodge Resort feels a world away from the hustle and bustle of everyday life. Halfway between Kelowna and Penticton, 1,200 metres above sea level along the Kettle Valley Rail trail, Chute Lake Lodge has long been a hidden gem of the area for locals and visitors alike. The original cabins and mainstay on the property were built over 100 years ago to house the railway workers of the time who used the location as their water stop. Up until last year, however, it was in danger of falling into an extreme state of disrepair. Things appear to have changed course though, thanks to Mike and Lyndie Hill – owners of Okanagan-based Hoodoo Adventures – who purchased the property, and have big plans for the place, including year-round operation.

Wine country in the winter

The Okanagan region enjoys a worldwide reputation when it comes to wine, and Penticton is no exception. Surrounded by scores of vineyards, the city offers something for well-seasoned wine enthusiasts, as well as those who want to discover new tastes. Although it may be off-season for the vineyards themselves, numerous wineries in town stay open through the winter, ready to welcome all those who stop by. Visiting in the winter months means also avoiding the larger summer crowds. 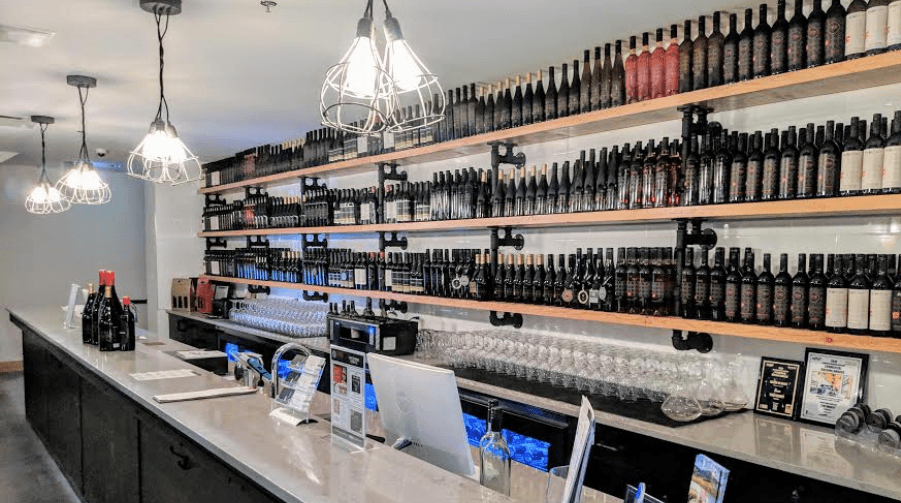 Some of the wineries to check out include the new TIME Winery, which is located in what used to be a movie theatre downtown, and is the brainchild of well-known winemaker Harry McWatters – founder of Sumac Ridge. Other notable stops include Great Estates Wine Experience Centre and Poplar Grove Winery. Founded in 1993, Poplar Grove is one of the original five wineries on what’s known as the Naramata Bench. The winery was bought by Tony and Barb Holler in 2007 and their sons, Chris, Andrew, Matthew, and Eric farm more than 100 acres of estate vineyards with meticulous care.

Craft beer in the colder months

While it’s commonly known as a mecca for winemaking, Penticton also enjoys a thriving craft beer scene, which began over two decades ago, with the Tin Whistle Brewery and the Barley Mill Brewpub. Today, those originals have been joined by Cannery Brewing, Bad Tattoo Brewing, Highway 97 Brewing, as well as soon-to-be fully operational Neighbourhood Brewing and Hatchery Brewing – the latter opening up in what used to be the Mule Nightclub in the city’s downtown.

Sure, it may seem like a lot for a town this size, but each of these operations manage to bring their own unique flavour and way of doing things to the table, and all of them can be found on the Penticton Ale Trail. 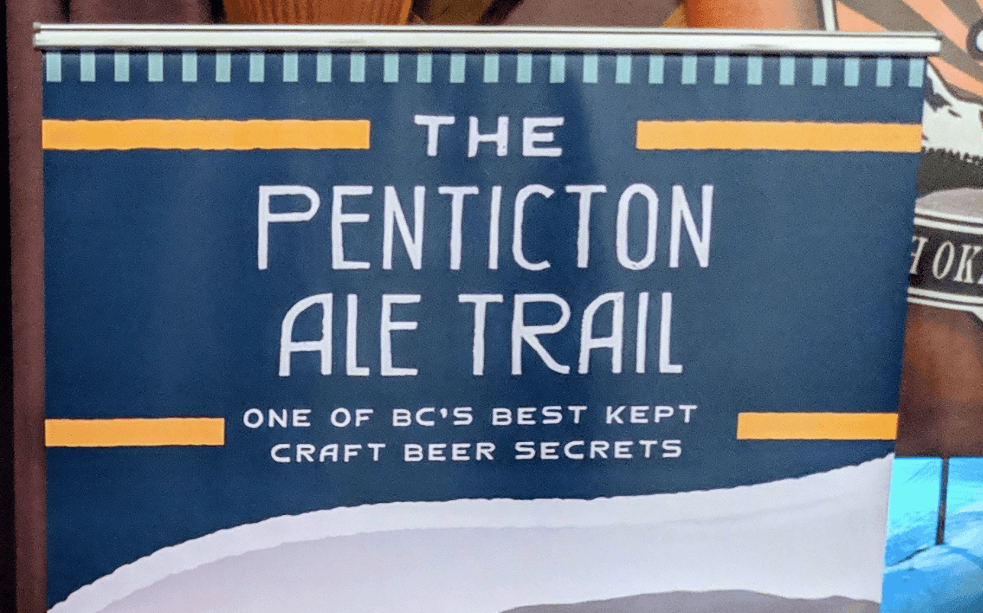 Patios may not be open during the winter months, but fresh local beer is always in season. Beyond just being available, though, the scene is celebrated in the winter – particularly during Apex Mountain’s one-night craft beer February flagship event: The Brewski Craft Beer Cider & Spirits Festival, held in the resort’s infamous Gunbarrel Saloon. 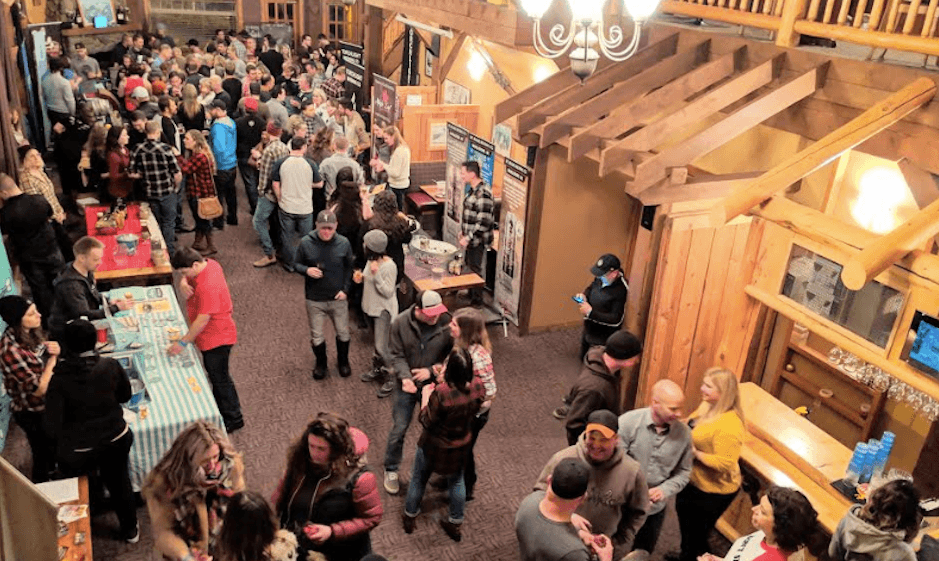 Melinda Coghill and her husband Mike are currently in the process of opening up Neighbourhood Brewing.

And if the Coghill name sounds familiar to BC craft beer drinkers, it should: The duo are the founders of Port Moody’s Yellow Dog Brewing.

Coghill said that while they didn’t have any immediate or obvious connections to the community in the form of family or close friends, when they decided to launch their new venture, the pull of Penticton was simply just too great to refuse.

This is a common refrain for newcomers, as well as long-time residents. And for visitors, it quickly becomes obvious why Penticton derives its namesake from the from the Interior Salish word snpintktn – commonly translated as “a place to stay forever.”

True, there is no shortage of summer activities to enjoy in Penticton, and it’s the season when the city does see its largest influx of visitors.

But for those seeking a unique and accessible winter experience in the BC Interior, this is a city that provides the perfect opportunity to do just that.

And even if you’re not able to “stay forever,” Penticton is a place that should definitely be on your winter radar.