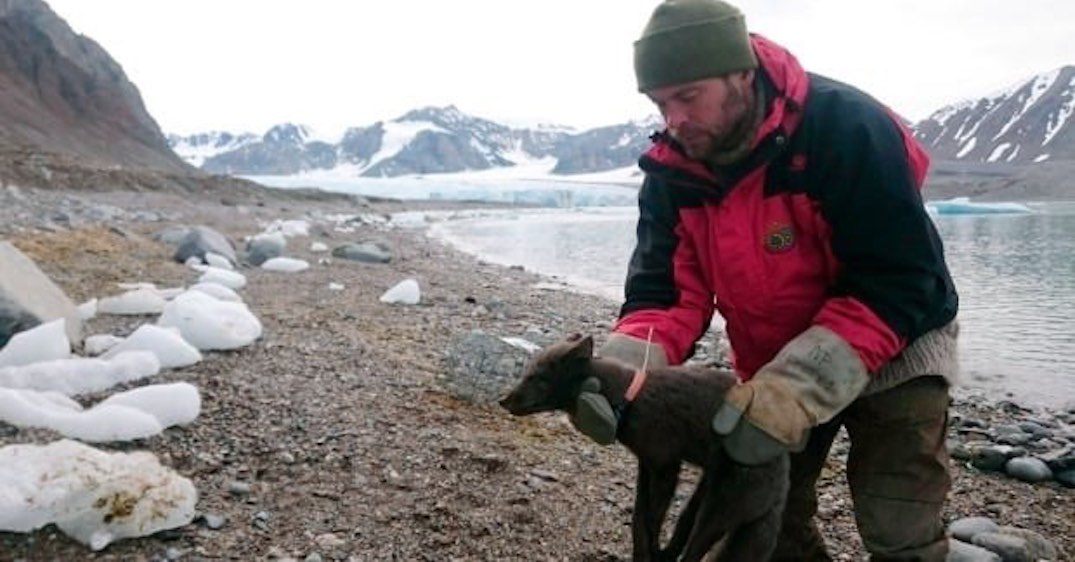 A scientists fits a tracking collar onto an Arctic fox (Apijuq_arcticfox/Instagram).

A young Arctic fox has just shocked scientists with a long-distance record.

Just shy of a year old, the female fox walked all the way from Norway to Canada in just 76 days. Her epic 3,506-kilometer journey is detailed in a report by researchers Eva Fuglei and Arnaud Tarroux.

The fox started in Spitsbergen, the largest island in Norway’s Svalbard Archipelago. She eventually arrived at Ellesmere Island in Nunavut, Canada. Her journey is among the longest ever recorded for her species, according to researchers at the Norwegian Polar Institute.

This particular Arctic fox was of the coastal variety (also known as “blue fox”). Arctic foxes wear a thick fur coat that allows them to survive harsh climates and temperatures as low as minus 50 degrees Celsius. The coastal variety hunts marine birds and fish in addition to small rodents such as lemmings, making it possible to sustain herself while crossing vast expanses of sea ice.

Well-equipped for her Arctic journey, the fox was also wearing a tracking collar that allowed Norwegian Polar Institute researchers to trace her route. They fitted her with the device in 2017 before releasing her into the wild as part of a wider, ongoing study about the spatial ecology of Arctic foxes.

The collar tracked the young fox as she let her natal area on March 1, 2018, and followed the western edge of Spitsbergen’s coast. On March 26, she found ice-covered sea and ventured across the expanse, leaving Spitsbergen behind. She reached north Greenland on April 16, only 21 days later, after covering a distance of roughly 1,512 km.

The fox left Greenland on June 6 and crossed another ice sheet, reaching Nunavut’s Ellesmere Island on June 10. She covered a distance of 3,507 km in her 76-day journey between Spitsbergen and Ellesmere.

Between first setting off on March 1, 2018, and finally settling into a new permanent home on Ellesmere Island on July 1, she travelled a total distance of 4,415 km, leaving her trackers rather impressed.

“This is, to our knowledge, the fastest movement rate ever recorded for this species,” Fuglei and Tarroux said in their report titled ‘Arctic fox dispersal from Svalbard to Canada: one female’s long run across sea ice.’

Published this morning: "Arctic fox dispersal from Svalbard to Canada: one female’s long run across sea ice" https://t.co/vUvu4NbPEj This is the first satellite tracking of natal dispersal by an Arctic fox between continents. Authors: Eva Fuglei and Arnaud Tarroux pic.twitter.com/gowSov0OBA

The fox’s travelling speed varied greatly during her journey but she moved at a mean speed of 46.3 km/day. On her best day, she moved 155 km/day. She travelled the quickest when she was crossing sheet ice. Researchers believe sea ice is used as a platform for dispersal rather than foraging habitat.

“Circumpolar connectivity has been maintained among Arctic fox populations across most of the species’ distribution range, likely because sea ice serves as a bridge linking distant populations,” the report says.

While such a journey explains evidence of gene flow amongst fox populations across Arctic regions, it raises questions about the future.

“Rapid warming in the Arctic may change this. In the waters around Svalbard, the general decline of sea-ice extent has already been reported to be affecting the spatial ecology of several species of sea mammals.”

Where is our intrepid Arctic fox now? She remained in a small area within Nunavut’s Fosheim Peninsula until the day her satellite transmitter stopped working this February.

Wherever she is, she now has a brand new habitat to call home and some well-earned privacy.