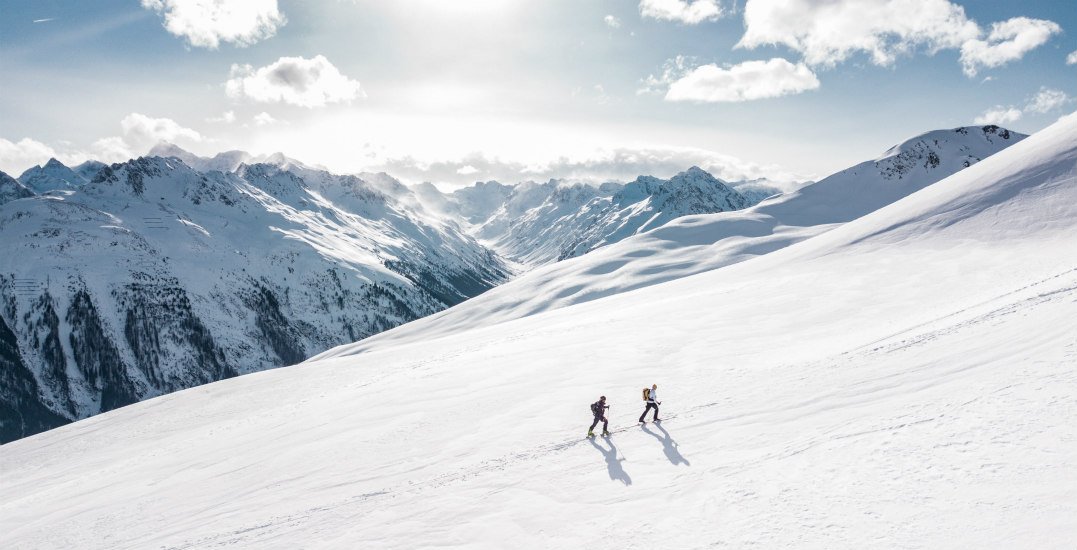 Although we may sigh about the weather and dream of tropical islands, Canada is one epic place to be spending the winter season.

More and more Canadian travellers are embracing the chill and turning to cold-weather vacations. More than half of Canadians (60%) consider Canada a go-to destination for winter travel, according to a recent survey by InterContinental Hotels Group (IHG).

When it comes to seasonal travel, 51% of Canadians currently don’t have any plans at all. But this doesn’t mean it’s too late for you to book a last minute trip close to home. Defy the norm and go snowshoeing through vineyards, watch eagles in their natural habitat, or track wolves in snowy forests.

Winter trips should ignite your passion for adventure and heighten your appreciation for the natural world. That’s why IHG partnered with travel expert Robin Esrock to create this list of 10 must-try winter experiences across Canada.

Windsor – Prowl for owls under the stars 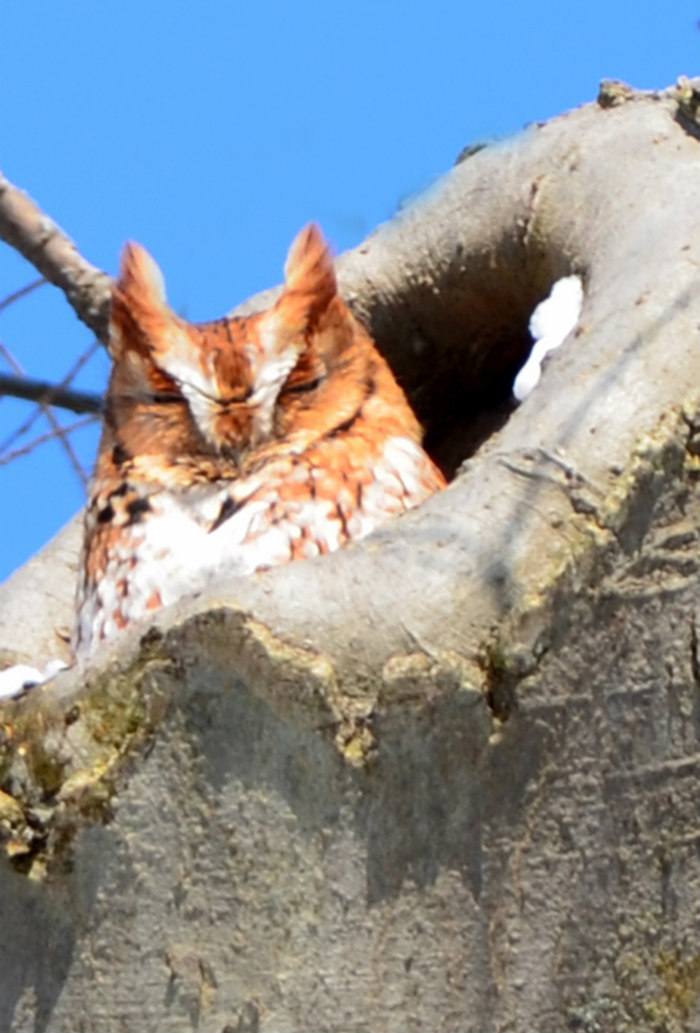 The most southerly point of mainland Canada, Point Pelee National Park, is a haven for birdwatchers, butterfly chasers, and outdoor enthusiasts. But winter here brings its own starlit magic.

The park was designated a Dark Sky Preserve by the Royal Astronomical Society of Canada, and you can check out stargazing programs which run each month as the park is open until midnight. It doesn’t get better than the Owl Prowl program that lets you drive to the tip of the park to see ice formations and migrating birds. 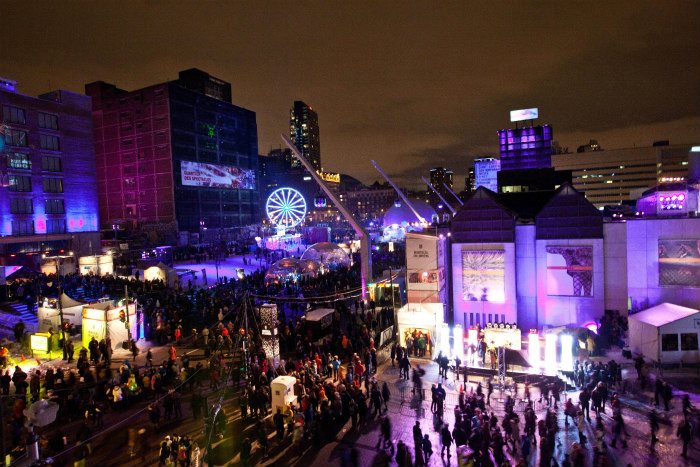 Where to stay: InterContinental Montreal

Did you know that one of the world’s largest winter festivals happens in Quebec? MONTRÉAL EN LUMIÈRE takes place in February and attracts over a million visitors each year.

Nuit Blanche, the highlight of the festival, brings together hundreds of thousands of visitors who pull an all-nighter exploring the free cultural, musical, culinary, and sports-orientated activities, which take place throughout the city from 6 pm through 6 am. This is easily the most enjoyable way to stay up past your bedtime this season. 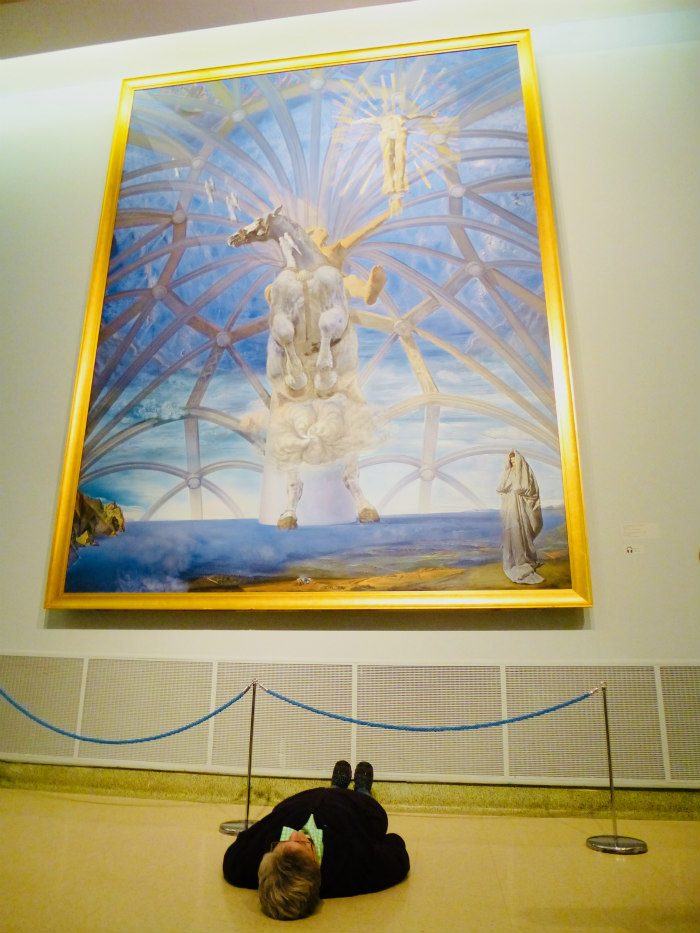 If spending time outdoors in chilly weather isn’t your thing, don’t worry. You can escape the cold for the warmth of Beaverbrook Galley in New Brunswick. Those who visit the city are encouraged to lie on the floor beneath one of the world’s most incredible paintings, Salvador Dali’s Santiago El Grande.

It’s probably not something you’d typically do on a vacation, but it’s 100% worth your time when you’re in Fredericton during winter because the painting is said to surround and overwhelm the senses.

Niagara on the Lake – Snowshoe through a vineyard 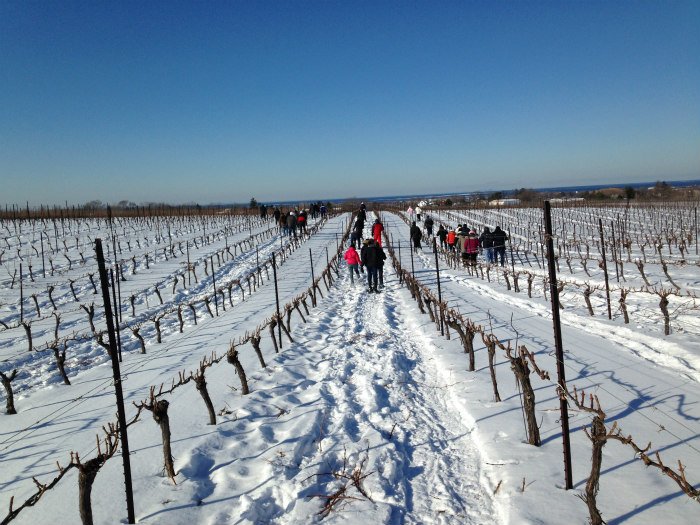 Snowshoeing through a vineyard, Niagara on the Lake, Ontario/Thirty Bench

Ever wanted to see what a vineyard is like in winter? This season, you can. Let a snowshoe expert guide you through the vineyards of Thirty Bench, where you’ll be accompanied by a wine consultant as you sample vino among the snow-covered vines.

Warm up with a cup of gourmet chowder next to an outdoor fire, and enjoy a toast to the beauty, taste, and adventure, of winter in Niagara. Could it be any dreamier?

Canmore – Get underground, and undercover 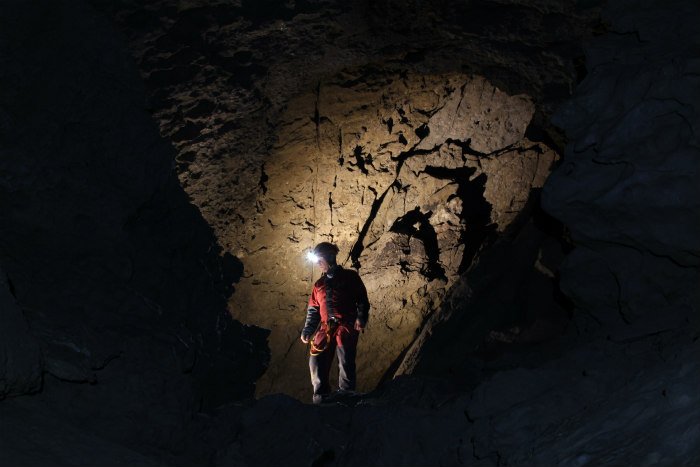 Where to stay: Holiday Inn Canmore

Here’s the thing about caves: It doesn’t matter how cold it gets outside, the temperature is always consistent inside. (We think.) Canmore is home to the well-known Rat’s Nest Cave, which stays at five degrees Celsius, no matter what.

This cool but manageable temperature is perfect for a winter subterranean adventure. You can sign up for a tour during which you’ll have the chance to discover stunning cave formations, rocky passages, and even ancient bones. Go ahead and live your very best Tomb Raider/Indiana Jones/Relic Hunter life. 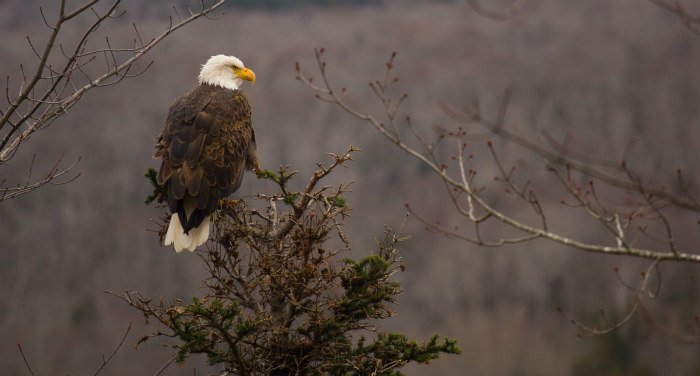 There’s nothing more spectacular than the wonder of seeing nature in action. In Goldstream Provincial Park, there’s an estuary where a record number of spawned-out salmon waste away in the stream while hundreds of magnificent bald eagles arrive from all over the continent to feast upon them.

From early December to late January, the eagles help themselves at low tide. This gives you the perfect opportunity to see these magnificent birds of prey in action. You can catch a free interpretive program, see a slideshow, or hear a talk at the local Nature House. PS, don’t forget to bring a pair of binoculars. 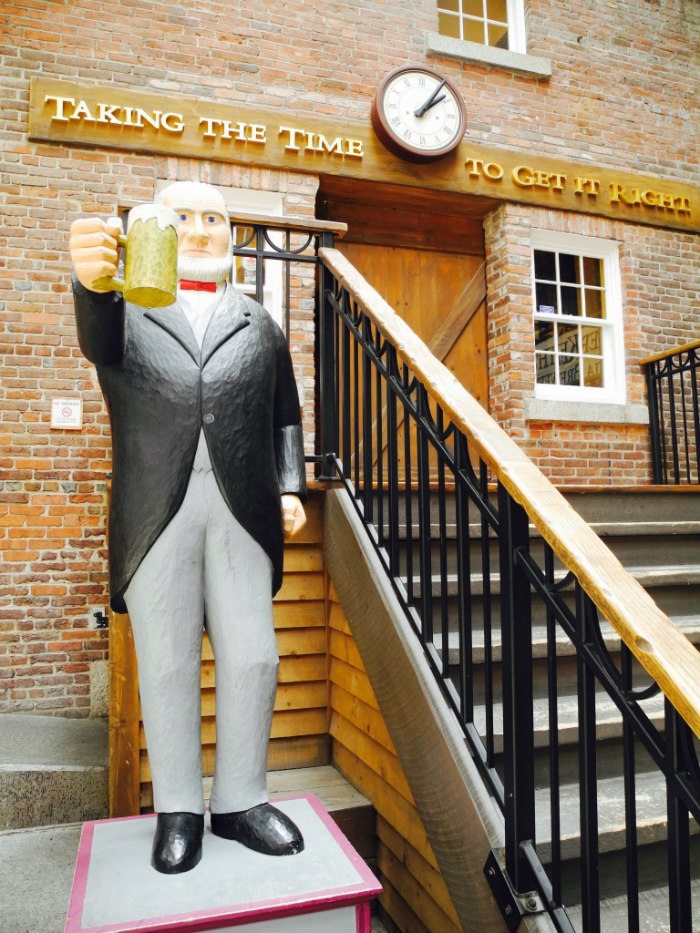 For beer lovers and those curious about the history behind this libation, Halifax has something special for you this winter. Take a step back in time during a tour of the Lower Water Street brewery where Alexander Keith created his famous India Pale Ale.

Historical re-enactors will walk you through the history of the man, his popular beer, and Halifax itself before you head to an old-fashioned tavern where you’ll sample the fruits of Mr. Keith’s labours. Pro tip: Nova Scotian locals don’t say “cheers,” they toast with a hearty “sociable!” 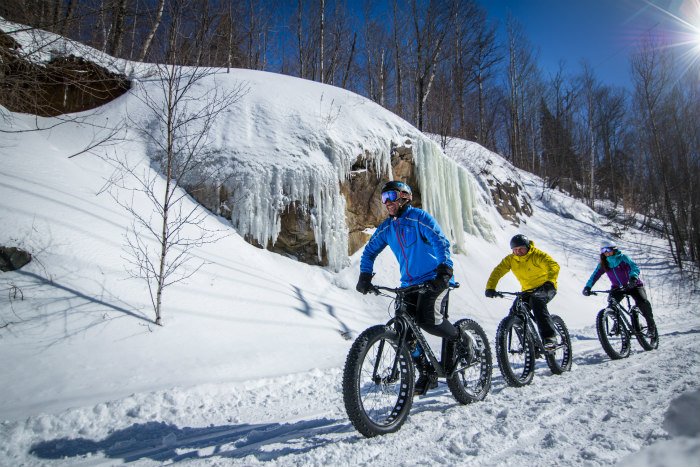 Feel the adrenaline rush as you cycle over fresh powder snow on a fat bike in Mont Tremblant. If you’re puzzled as to what a fat bike is, it’s basically a mountain bike with comically large tires designed to be ridden over snowy terrain.

It’s a perfectly exhilarating and unusual way to experience the slopes and nature of Mont Tremblant. Plus, it’s a fun way to stay active this winter.

Saskatoon – Track wolves in the snow 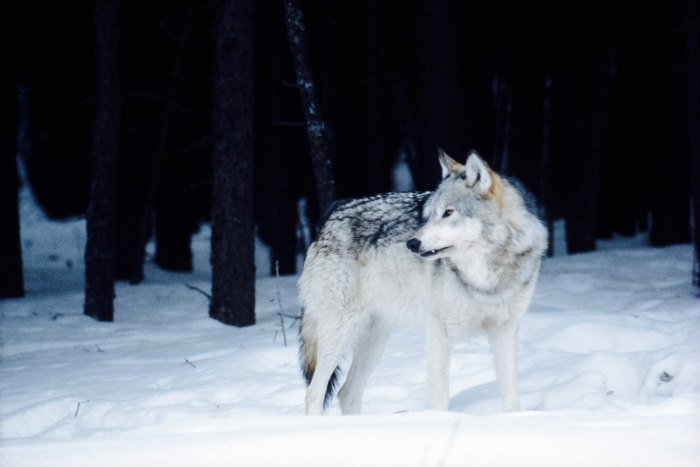 It’s not every day that you hear someone saying they’ve experienced tracking wolves in the snow, but it’s something you can do in Saskatoon. In Prince Albert National Park, the prairies meet the boreal forests, bordered by dense forests of birch, aspen and spruce.

This beautiful panorama hosts one of the most elusive creatures in Canada: the grey wolf. Although wildlife is unpredictable, this is one of the best places to encounter a wolf, especially in winter. Watch them chase prey across frozen lakes or join the wolf howl when park interpreters lead a caravan of cars to the forest edge for a man-beast conversation. 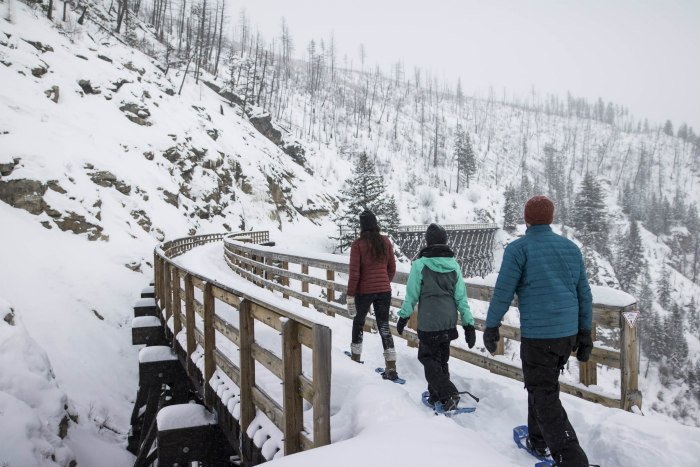 Snowshoeing is certainly one of the best parts about winter, and when you can snowshoe along a flat former railway that overlooks Kelowna and the Okanagan Lake (3,000 feet below), it’s pretty sensational.

There are 18 trestle bridges in total and two tunnels which snake along Myra Canyon and were built by hand at the turn of the 20th century. Take the 12-kilometre stretch from Myra Station to Ruth Station, or take it easy, breathe in the fresh forest air, and turn back for a glass of fine local wine whenever you wish. This is another one for your winter bucket list!

There are a lot of elements to a great winter getaway, and that includes finding stellar accommodations. There are 177 IHG hotels across Canada including leisure-favourite hotel brands like Holiday Inn® Hotels & Suites and luxury brands like InterContinental® Hotels and Resorts.

Book your next winter vacation at IHG.com/Canada now.