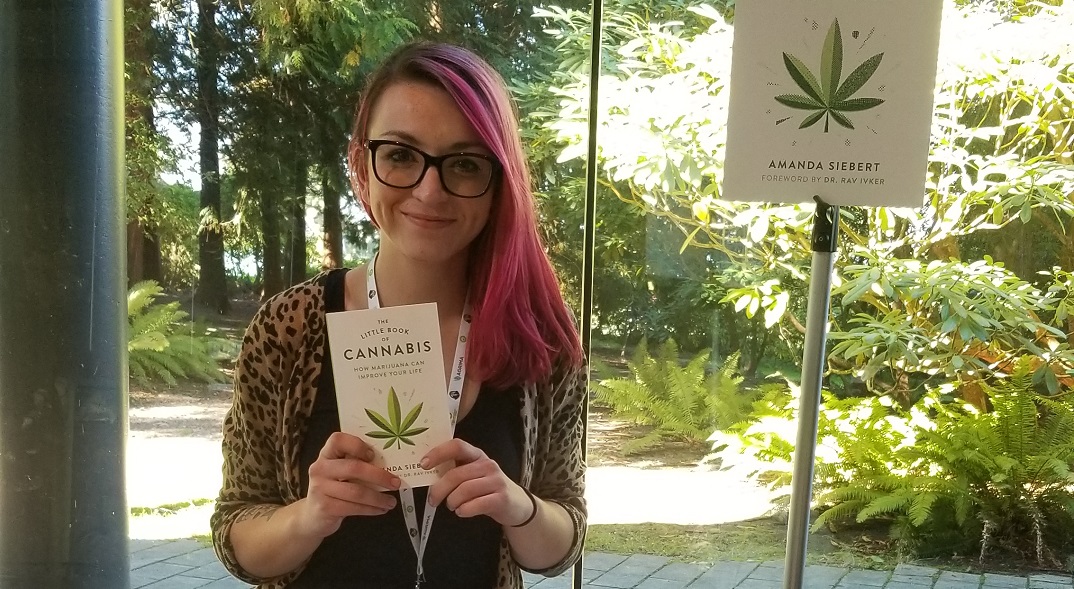 Amanda Siebert is passionate about cannabis, and now that it is legal in Canada, she is hoping more people can be helped by the plant.

The Little Book of Cannabis: How Marijuana Can Improve Your Life, is Siebert’s first book, and targets the cannacurious – experts and newbies alike.

“I would like to say that the book is for everyone,” Siebert told Daily Hive over the phone.

“It includes anyone who has never used cannabis before to the enthusiast who might use cannabis all the time but isn’t aware of the therapeutic benefits they are getting from their use.”

“It’s a conversation starter, it’s pocket-sized, it’s affordable, and it gives people a bit of an opportunity to think differently about cannabis or at least to consider the idea of thinking differently,”

The Little Book of Cannabis is divided into 10 chapters and covers a range of topics from sleep and sex to pain management and cancer treatments.

“Ten ways is really just the tip of the iceberg,” said Siebert. “When I was doing my research, I wanted to include more chapters but then it wouldn’t have been the little book of cannabis.”

Siebert is a seasoned cannabis consumer, and really started focusing her attention on it while working at the Georgia Straight (during which time she also received two journalism awards for her work on the opioid crisis in the Downtown Eastside).

“I think it was after an interview I did with Tommy Chong, my editors sort of clued into to the fact that cannabis is something I’m really passionate about and they also knew that legalization was coming down the pipe. They saw an opportunity there and they asked me if cannabis would be something I’d be interested in focusing on.”

Siebert jumped on the chance and worked as a cannabis editor for nearly two years before transitioning to freelance writing.

“From a media perspective there’s just so many more players, so much more interest, there’s a lot of media companies starting new verticals that focus on cannabis. I think it’s really cool because it gives us a different perspective. We’re not limited to the one-sided ‘cannabis is bad, you should avoid it’ narrative,” Siebert said about the development of cannabis in the media over the past years.

Relying on science and expert commentary, Siebert is hoping to help steer the cannabis conversation towards something relatable and approachable to the masses.

“I think we’re sometimes in an echo chamber as cannabis enthusiasts, and we need to reach out to the people who are not partaking who have questions about it,” said Siebert.

“We need more of an open and honest conversation, talking about exactly what cannabis does and the fact that it’s a plant – that I think will eventually make people more comfortable around it.”

Each chapter in The Little Book of Cannabis starts with a case study demonstrating how someone was able to use cannabis successfully in a specific way.

“Then I go into the ins and out of that condition or ailment, and then some historic ways that we as humans have used to treat that, and then of course expert testimony, science – lots of science – there are lots of citations in the back of this book.”

The Little Book of Cannabis is available online and in select stores.

Siebert will also be selling and signing the book at some local events this month.

Tickets: $5 available here. All ticket proceeds will be donated to Cannabis Amnesty