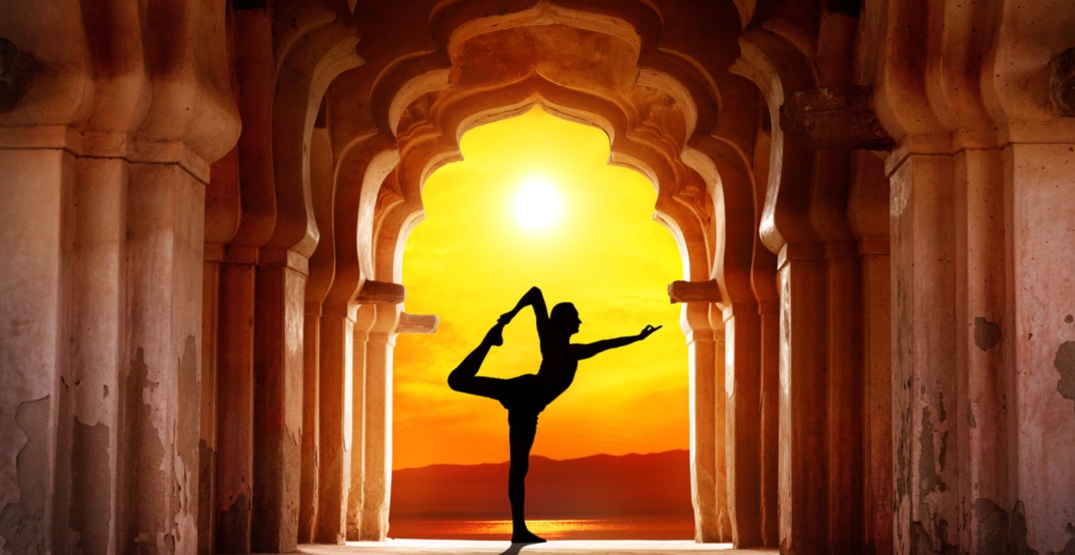 Yoga in a temple (Pikoso.kz/Shutterstock)

Higher Consciousness is a Grow series that explores the transcendental nature of cannabis and how it can be incorporated into a wellness routine. Written for Daily Hive by Steve Fazzari, an accomplished yogi, snowboarder, and adventurer.

Ganja was historically a yogic thing.

Shiva is known as the destroyer of evil and the symbol of the Supreme Self, but he is also known as the first Yogi and the lord of cannabis. As such, holy people or sadhus in India may choose to celebrate Shiva and prepare for practice by smoking the chillum (conical clay pipe) and giving a burnt offering to the lord Shiva, who is often depicted sparking one up too.

Where does this all come from though? Why would Shiva be constantly burning one down?

To understand the relationship, we have to go way back to the early days of the universe.

One day Shiva was off doing as Shiva does (dancing, or meditating, or something else), while the Devas (Gods) and Asuras (Demons) were devising a plan to extract the amrita, or nectar of immortality, from the depths of the cosmic ocean.

They used Mount Mandara as the pole to stir the water, and Vasuki, a King Serpent that usually resides wrapped around Shiva’s neck as the churning rope. Vishnu became a Kurma turtle to hold the mountain on his shell to make sure it didn’t sink completely.

As the gods and demons continued churning, the deadly halahala poison was released before they could extract the amrita. Halahala was the worst poison in the universe, and began killing the gods and demons, and infecting the whole world. Nothing was immune to its deadly effects. The poison was so powerful, it would surely destroy the entire universe.

In a panic, the gods and demons first ran to Brahma, who then directed them to Vishnu, who then told them that Shiva was the only one who could save them. When they went to Shiva and humbly prayed for his help, Shiva agreed and immediately went to the ocean to see the carnage ensuing from the release of the poison.

Without hesitation, Shiva quickly swooped down and sucked the poison into his mouth. Reacting immediately (and not wanting the halahala to overcome Shiva and destroy him), Shiva’s wife Parvati bound his throat with her hands, blocking the poison there. This turned his throat blue, and thus Shiva was given the name Neelakantha, or the blue-throated one (neela= blue, kantha= throat). When the amrita was finally extracted from the ocean, some say that where tiny amounts of this elixir dropped onto the earth, cannabis plants sprouted from the soil.

Shiva had saved all of creation but was now experiencing the results of his noble sacrifice. The poison trapped in his throat produced intense heat, causing Shiva to get restless (which, when being embodied by the lord of destruction, may not necessarily put your mind at ease). The gods, fearing what may come should they leave this problem unchecked, took it upon themselves to figure out how they could cool Shiva down.

Chandra Dev, the moon god, made a home for himself in Shiva’s hair. Some accounts of the story say it wasn’t until after Shiva had drank the halahala that he made Mount Kailash (which maintained sub-zero temperatures year-round) his home to stay cool.

Lastly, cannabis is supposed to be a coolant that lowers the body temperature and slows down metabolism, so Shiva began smoking the ganja to calm the inner poison to ensure it wouldn’t lead to further chaos and destruction.

Shiva has many forms that he takes; in Nataraj he is engaged in the cosmic dance, but in Shankar he sits motionless in the Himalayan mountains on Mount Kailash, and is eternally meditating on the infinite Self (the Atman, or the union of all beings). Shankar rests in the cool snow-capped mountains with ash on his skin and is constantly trying to attain eternal freedom. As an aide in his quest, he always has his chillum close to take a toke or two.

Spiritual individuals in India have carried on this tradition passed down from Shiva by sharing the chillum with others along the path towards Self Realization; and before they spark it up, they invoke the name of the lord of the bhang, and call out “Boom Shiva,” a proclamation you can still hear echoing through the mountains in India (and sometimes, at least if you’re somewhere near me, in the mountains of the Pacific Northwest).